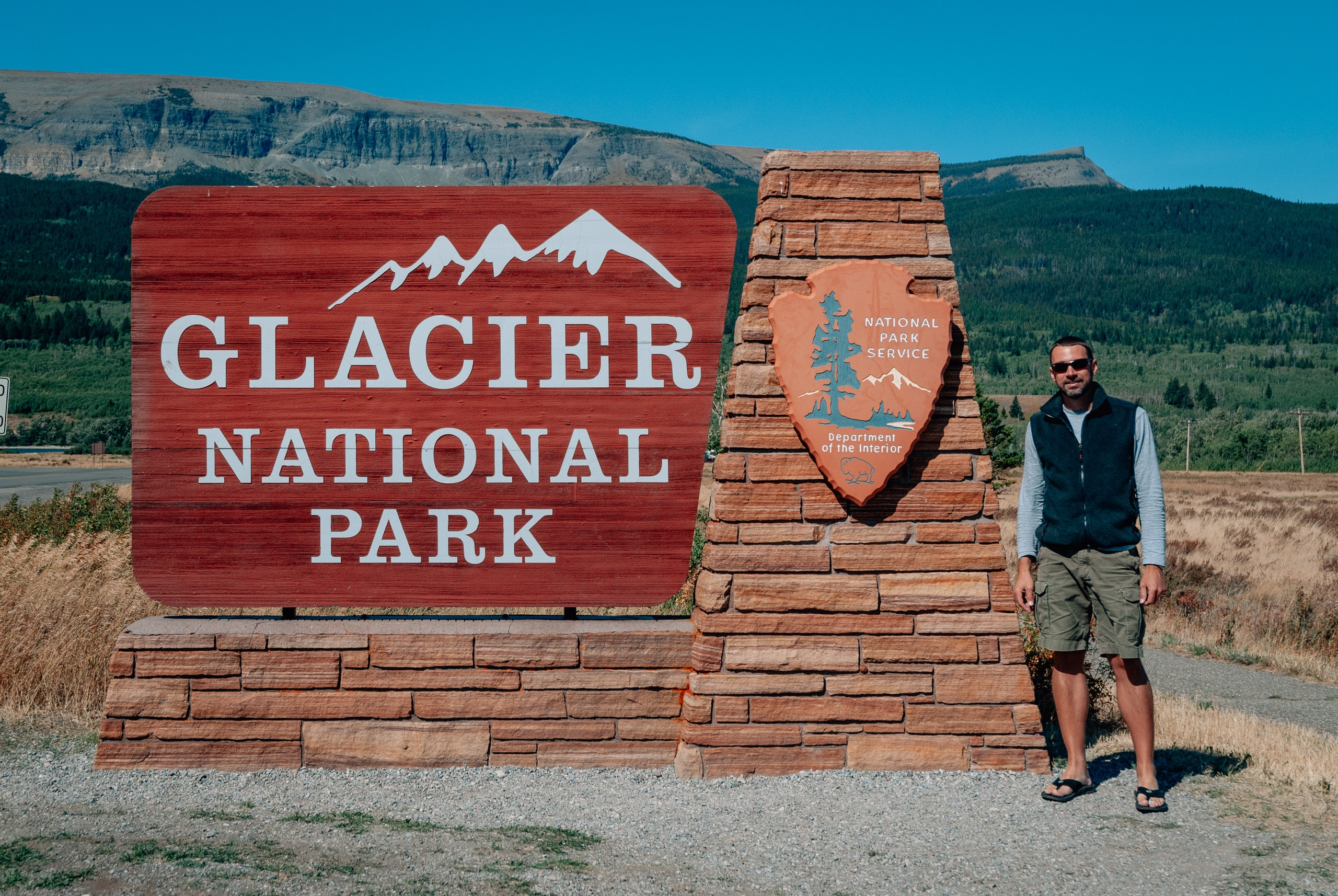 The next stop on my tour of national parks is Montana's Glacier National Park, in the northwestern corner of Montana on the Canadian border with Alberta. The official name of the park is the Waterton-Glacier International Peace Park, so named because it was established, first as two separate parks, and then later joined as a symbol of lasting peace between the US and Canada. Sigh. The first of its kind in the world, there are now over 135 so-called "peace parks" around the globe. I get the symbolism, but they really play up the "peace" thing to an obnoxious level. I'm sorry, and with all due respect to some of my readers, that's gay. You can hike across the border, which is cool, but coming back you'll get shaken down by a homeland security "Ranger" and you best have your passport on you. The more impressive parts of the park are on the US side, but the Canadian side also has some worthy merits about which I'll talk more later. 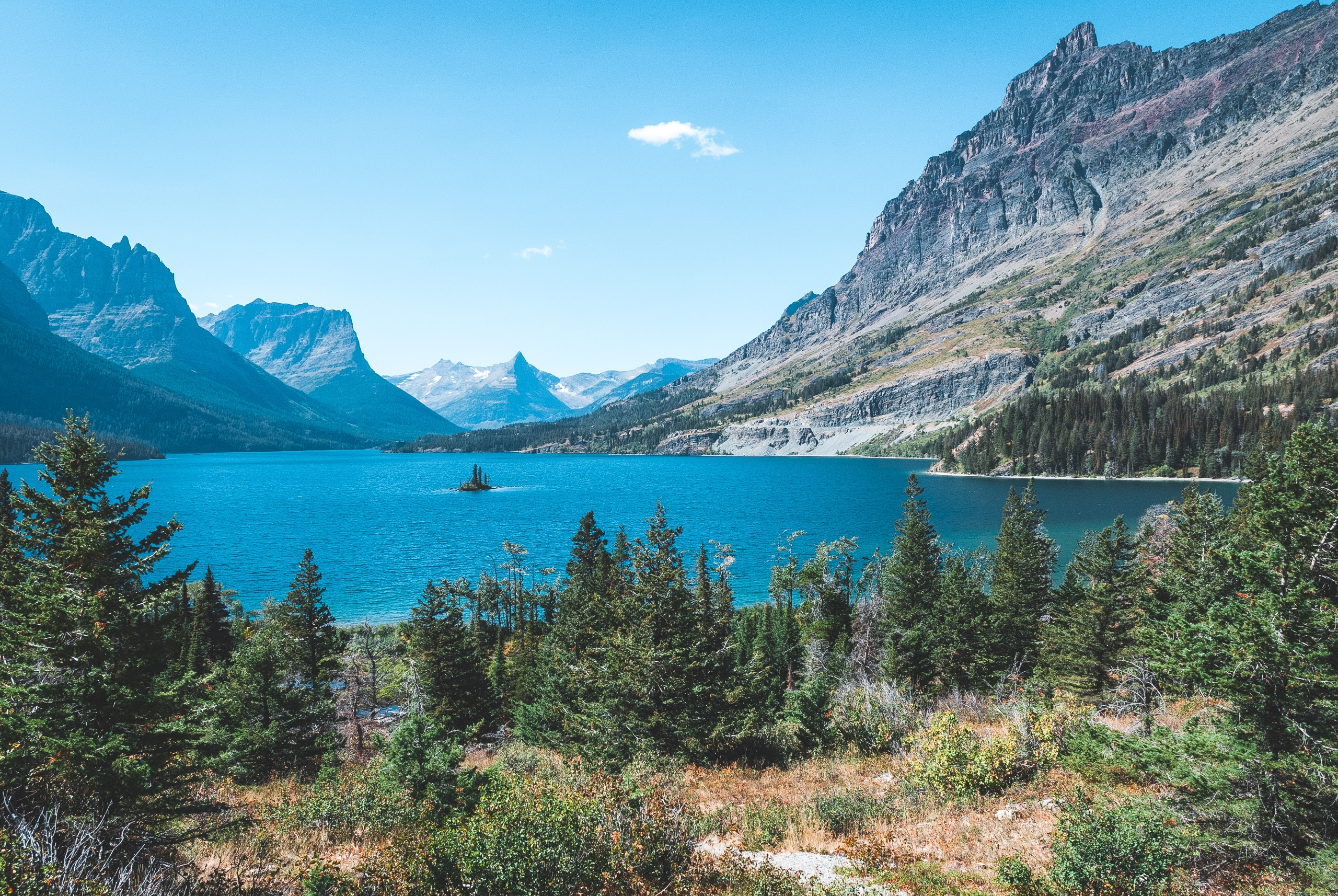 The glacier-carved valleys of the St. Mary entrance

Glacier is not very accessible, and does require some determination to visit. From Yellowstone, its about an 8 hour drive across Montana. An otherwise nice drive, it poured down excessive amounts of rain the entire trip which extended the journey to about 10 hours. Its interesting that this rainy day of driving was the only real inclement weather on the entire trip so far. The last major town is Great Falls, Montana and your next stop of any significance would be Calgary, Alberta. If you were otherwise journeying that way, or perhaps driving the trans-Canada highway, Highway 1, Glacier would not be too much of a diversion.

Glacier is an impressive park. As its name suggests, the park was founded in part due to its impressive collection of giant glaciers. That was in 1910, however, and today few of these glaciers are left. In fact, if you would like to visit Glacier and see actual glaciers, you should do so in the next 20 years because after that time its predicted they'll all be gone. Thanks alot, Al Gore. Glaciers aside, the landscape is pretty impressive and was formed as a result of glaciation during the last ice age. The Canadian Rockies rise en masse like a wall from the great Canadian planes, much like the American Rockies in Colorado. These peaks and valley were formed as glaciers pushed their away across the continent thousands of years ago. As I mentioned, some of these glacial remnants remain, clinging to the higher altitudes and sadly disappearing at an alarming rate. 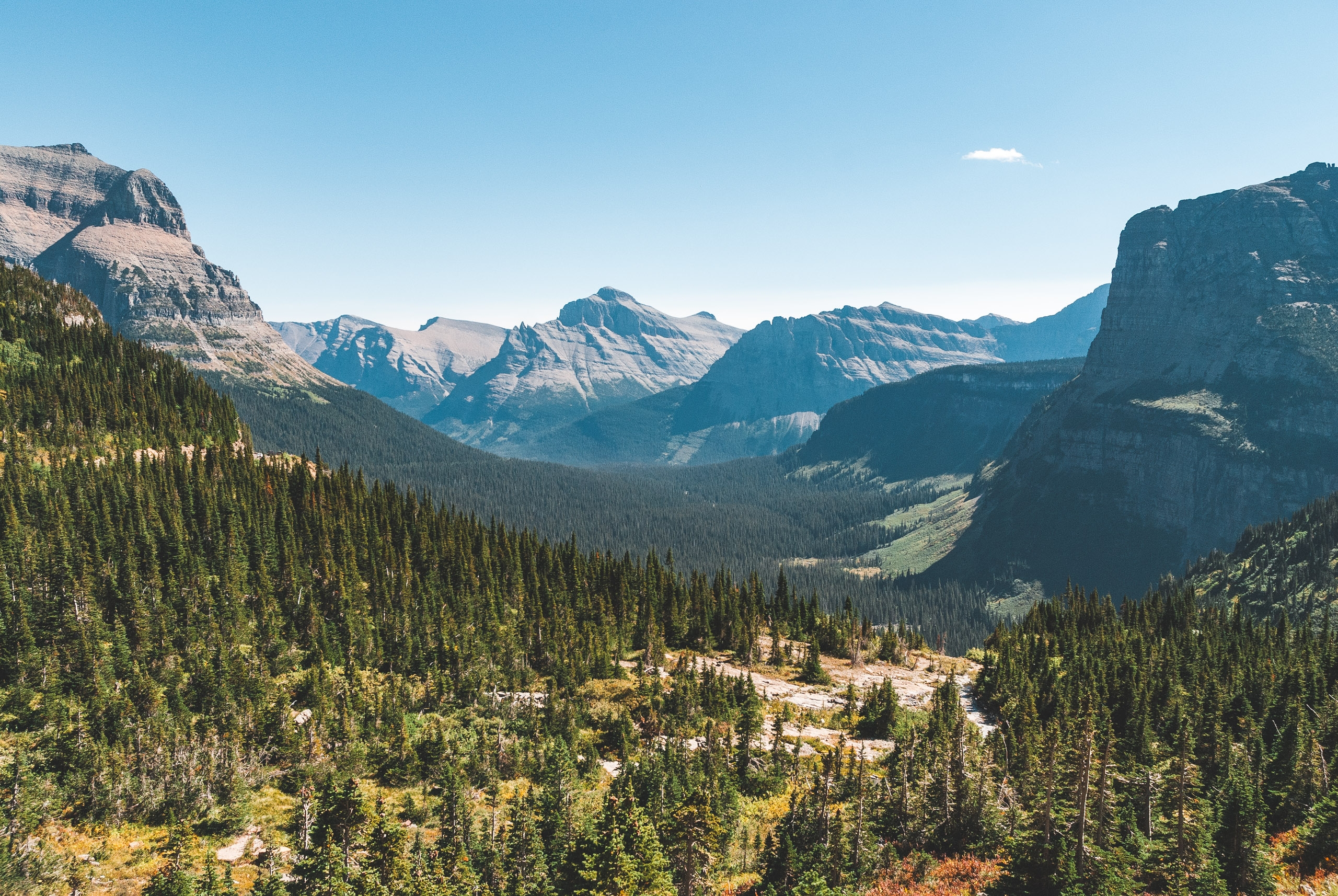 Another unique trait about Glacier is that it is the point of convergence for four distinct continental ecosystems and species of animals: northern species from the Arctic, maritime species from the Coast, prairie species from...the prairies and southern mountain species from the lower Rockies. All of this means that within the confines of Glacier National Park one is likely to see a wide and varied representation of wildlife. In fact, the largest concentration of North American grizzlies is within the Park's borders. I didn't see as much wildlife in Glacier as other parts, but I did see a few new ones including mountain goats, bighorn sheep and lots and lots of deer. In addition to the disappearance of glaciers, climate change is also threatening many of species diversification in places like Glacier. Bighorn sheep, grizzlies and and cougars are seen with lesser and lesser frequency these days, in part due to the change in climate trends. The debate about global warming's existence is largely behind us, but the debate on what to do about it still looms large. Regardless, one thing you should do is see places like Glacier before you cannot. If you do, I recommend driving alone, in individual cars, preferably large, fuel-inefficient SUV's while burning garbage and clearing forest for warmth. Ah, nature. 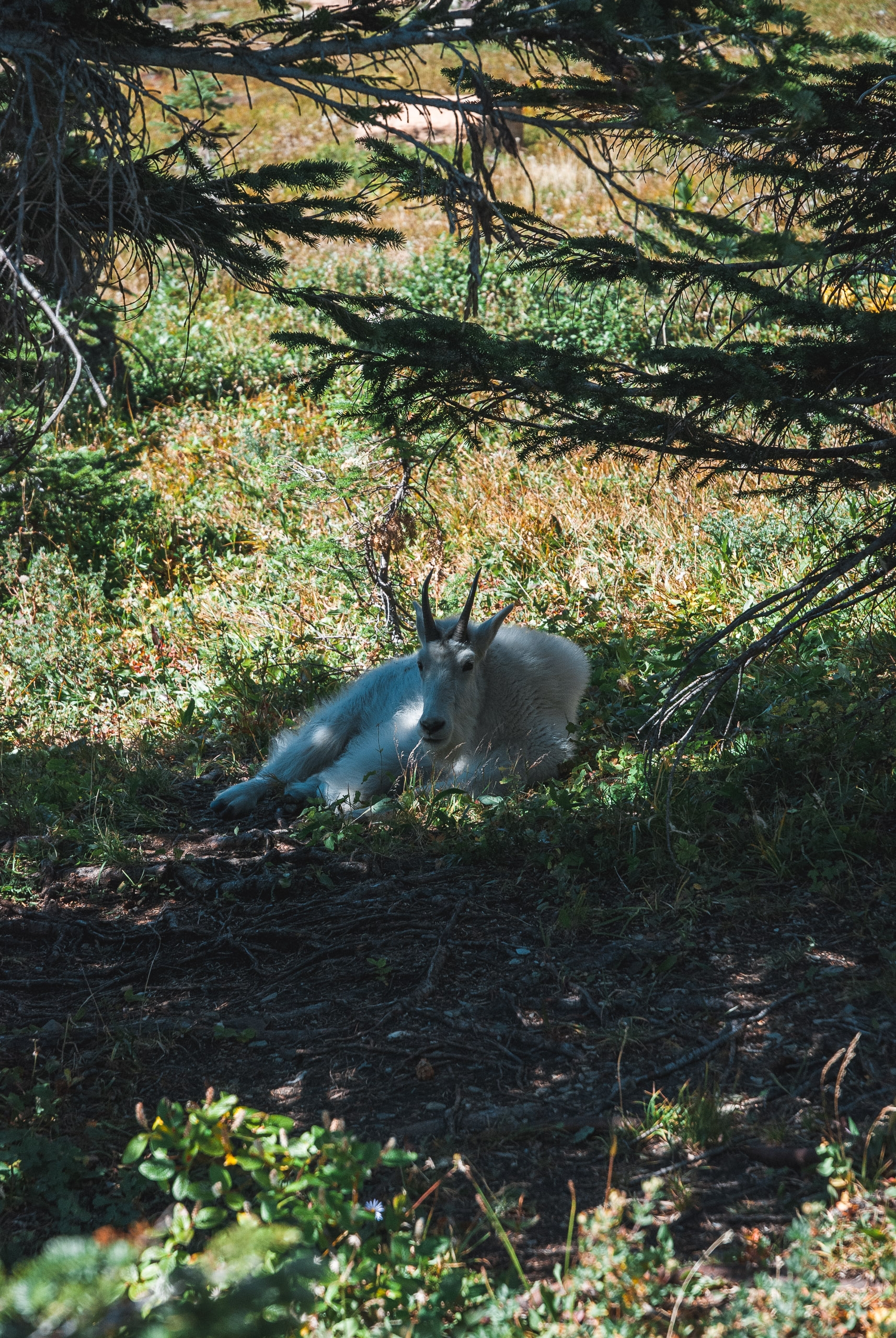 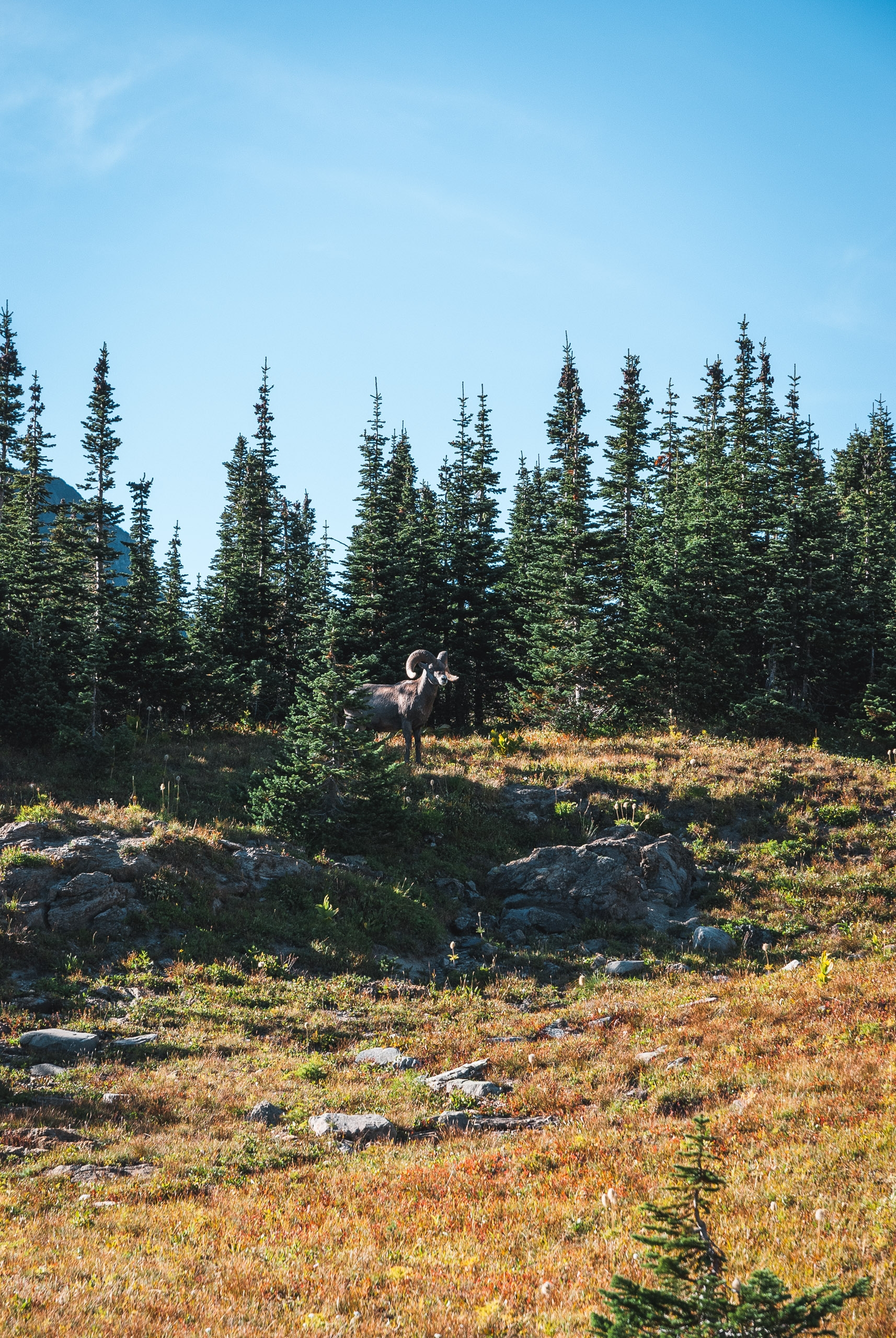 Driving into Glacier is impressive. Much like Yosemite, the landscape is immediately amazing with large, sheer cliffs of stone, meadows, gushing rivers and waterfalls, dozens of cobalt-blue alpine lakes and a handful of glaciers. The park's roads aren't interconnected so you have to exit and re-enter the park around its perimeter to see most of it. The most popular are East Glacier Entrance, St. Mary, and Many Glacier. I started at St. Mary, and drove along the park's famous road, Going-to-the-Sun Road. The highway was built during the New Deal and winds along the park's more notable ridges, canyons and rivers. Its a great start and affords terrific views easily from your vehicle. Logan Pass is one of the higher altitudes in the park; from there I hiked down to Hidden Lake, an easy 3 mile round trip. However, after my 40 miles through Teton, the easy 3 miles wasn't so easy, especially the hills.

Like Teton, the facilities in Glacier were adequate, clean yet spartan. The crowds were also pretty sparse, and many of the campgrounds were closing for the season. There was definitely a fall-like chill in the air, and much of the foliage was beginning to change colors. I camped that night in St. Mary and got up at dawn to hopefully see the sun rise over Logan Pass, but instead sat in the fog waiting to hopefully take some interesting pictures. Up among the glaciers, in that fog, it was eerily quiet and calm, not to mention butt cold. 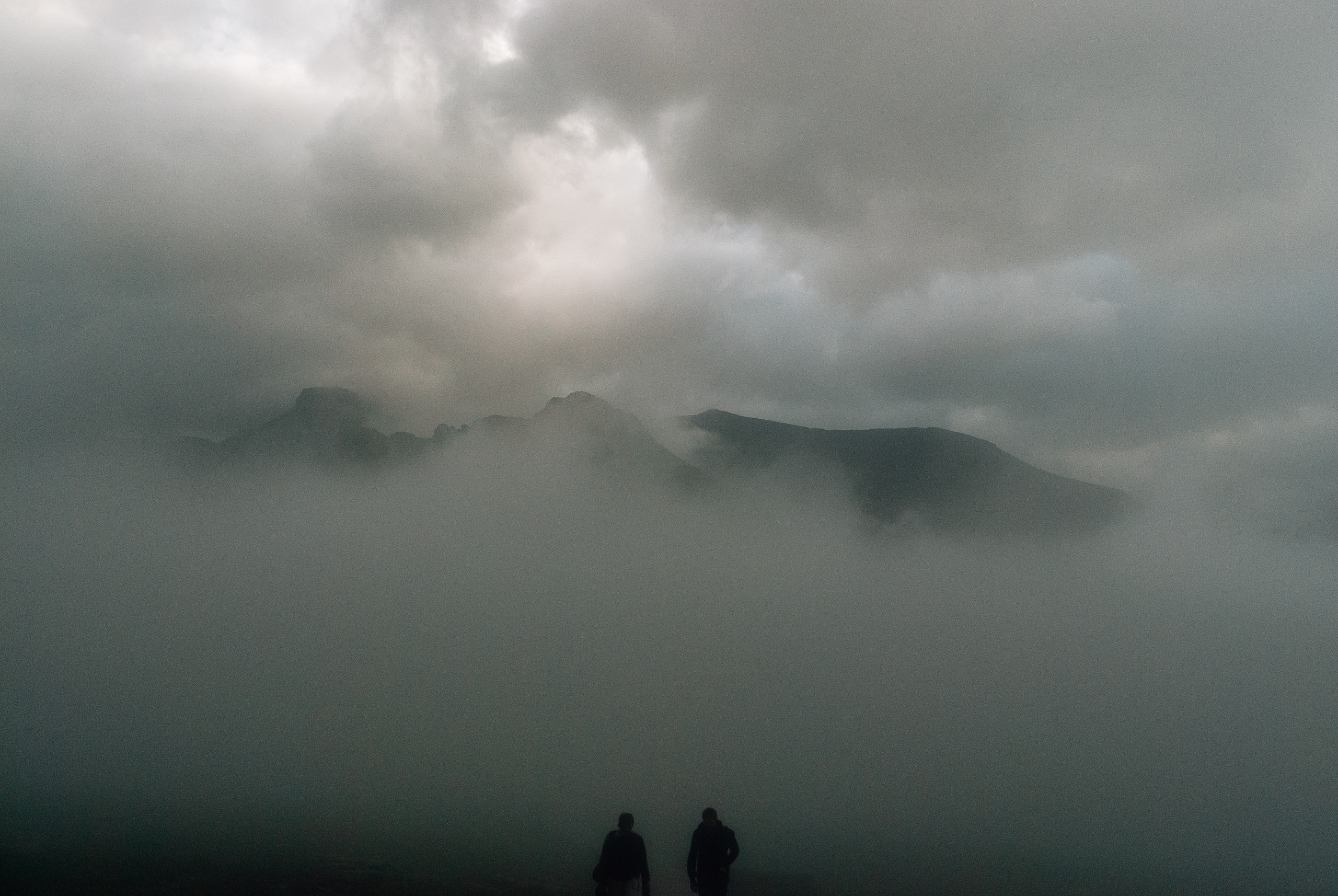 Other photographers ascending into the fog

The next day I drove up to the Many Glacier entrance, so named because of the area's many glaciers. Go figure. There's a lodge there that makes a pretty decent burger. They too were closing in a week and were having lots of specials to empty their kegs. I couldn't pass that up. From their I did two hikes, one to Iceberg Lake, where there were no icebergs, and to Grinnell Lake, where there were several. These hikes were about 6-7 miles apiece, and I was starting to feel much better after Teton. I'm certain the burger and beers helped. The landscape was interesting, but it threatened rain on and off and I was growing tired of photographing as I'm sure much of you are tired of seeing it. That night I camped at a place called Rising Sun...at sunset. It got down into the 20's that night, but I would later find that Canada would get much colder. 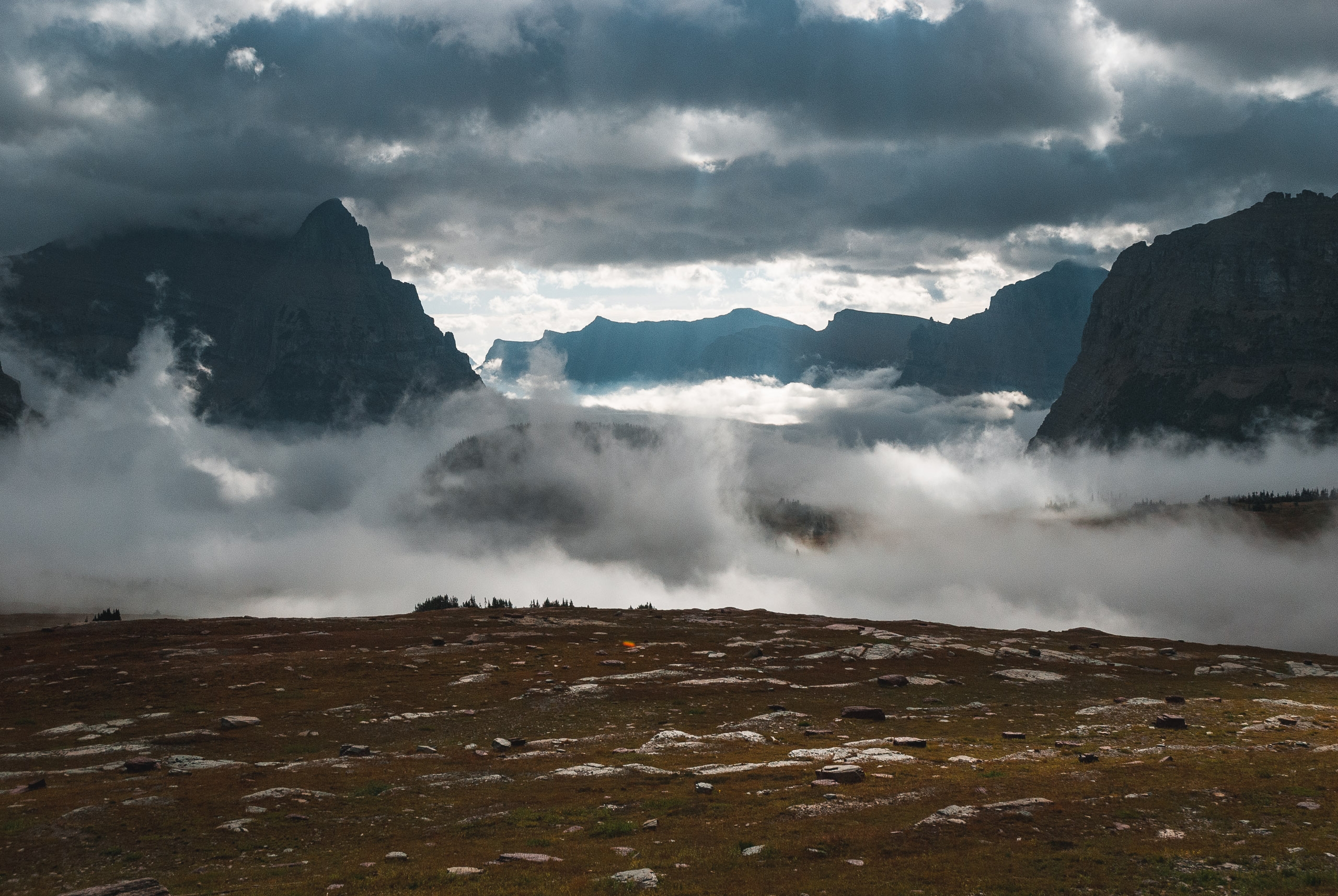 The next day I drove over the border into the Canadian portion called Waterton Lakes. Out of respect to Canadian law and their two official languages, the rest of this post will be presented in both English and French. 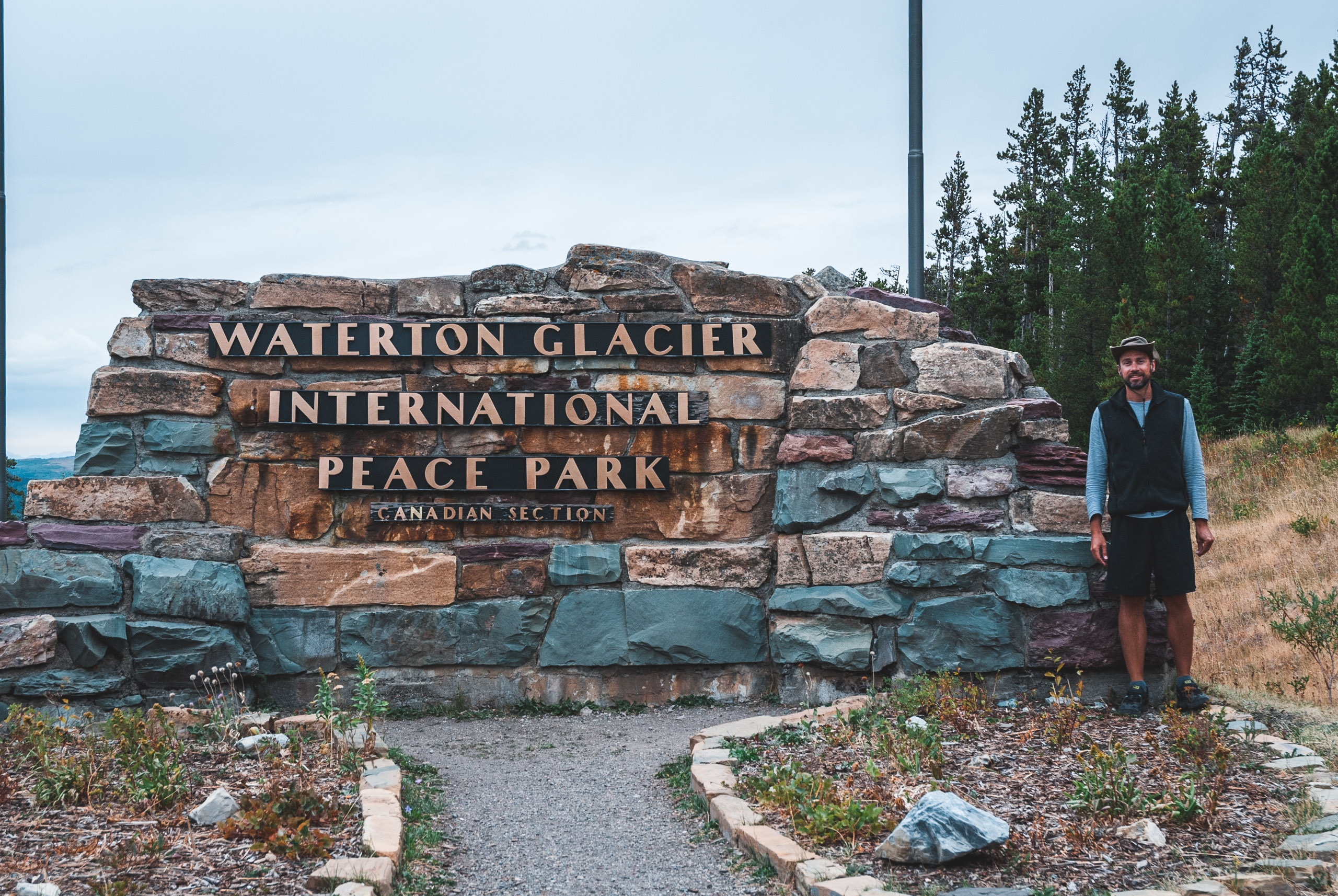 Me at the park entrance

I got to the border about a half hour before the border opened, but was third in line to cross. I'm sure there are all kinds of statistics on where to cross and when to cross, being third in the morning, with a dirty car full of junk and a three week beard, I got selected for inspection and had to remove everything from the vehicle. The Canadian customs officials were nice and polite enough, and the whole process didn't take more than a half hour. Oh well.

Le me at the le entrance 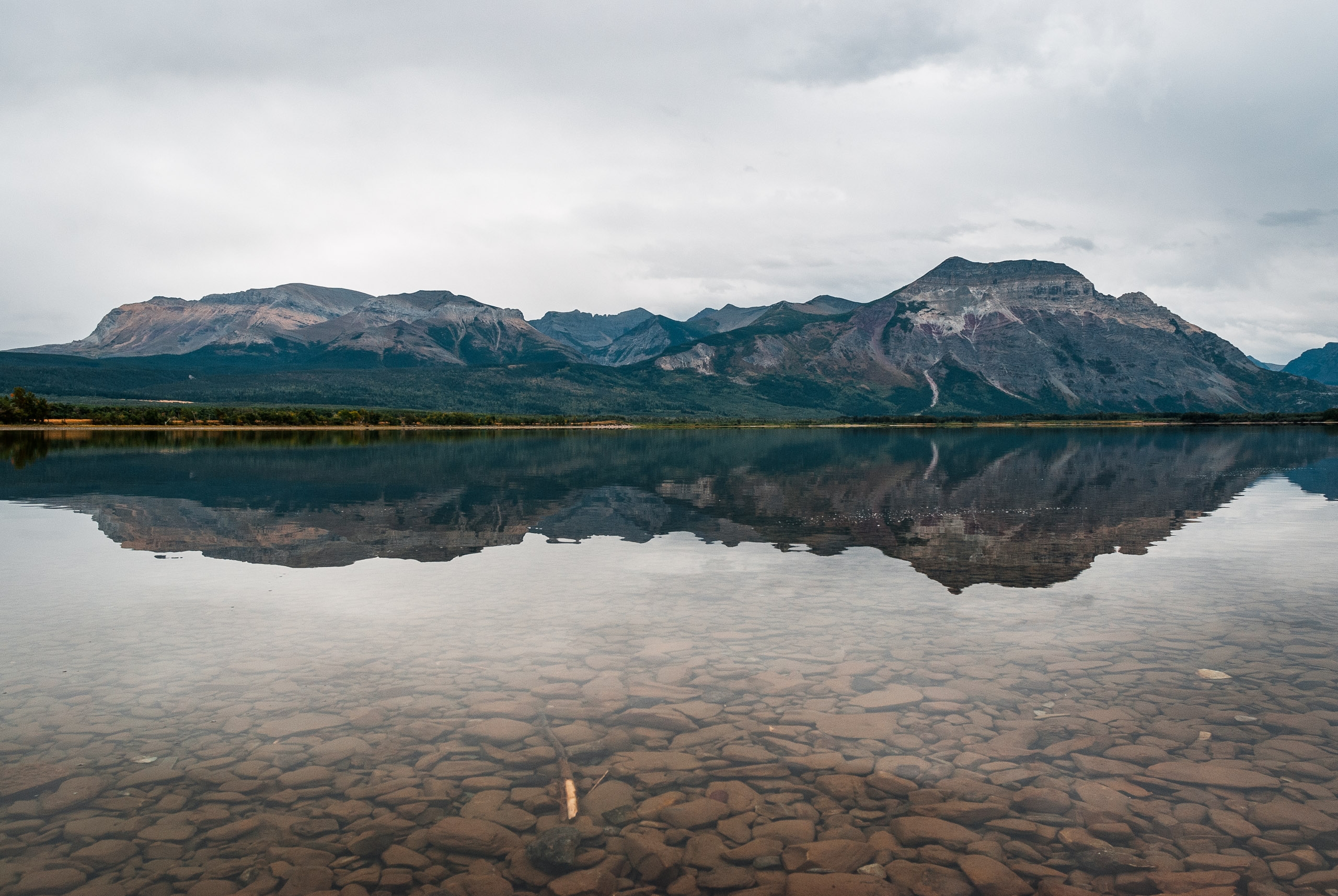 One of the many alpine lakes

The Canadian side of the park, while nice, wasn't as impressive. Essentially, there are a number of pretty alpine lakes and rest is very much just the backside of the peaks seen on the US side. I had lunch at the Prince of Wales Lodge, which was fun, and did some easy hikes around the area. It was a bit rainy, very cold and I was pretty sore from the previous day's hikes. What I did notice right away about Canada's parks is that they are far more developed that those in the US. The city of Waterton is in the park, and has busy streets full of restaurants, hotels and souvenir shopping. I thought this was odd, until I got to Banff which I'll talk about later. 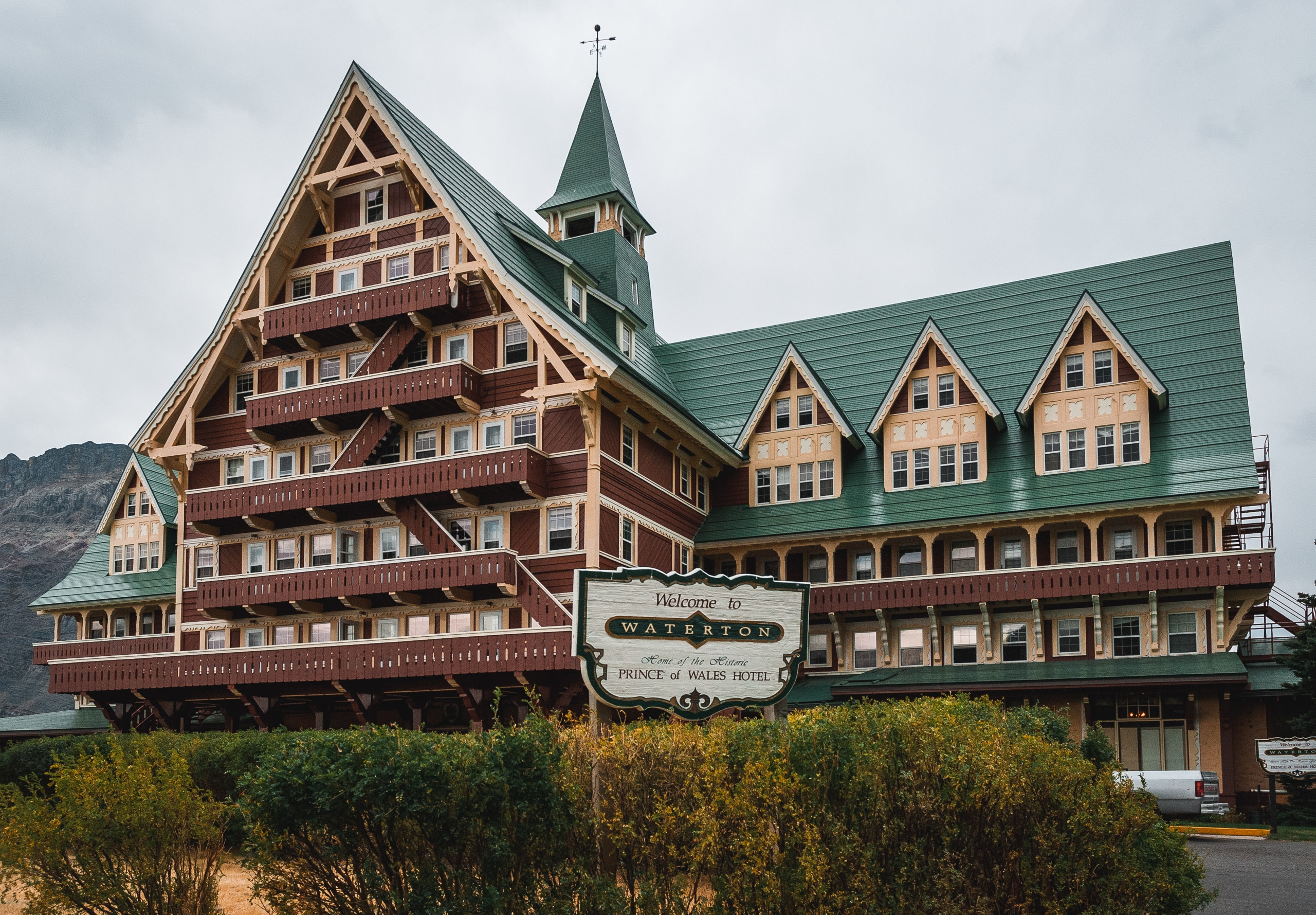 The Prince of Wales Lodge

From Waterton Lakes I drove north to Calgary. I spent most of the drive staring at my speedometer trying to figure out how fast I was going in comparison to the signs which of course were both in French and English, but all in kilometers per hour. I also picked up some of that funny money with the picture of the Queen on it. Last time in was in Canada, the exchange rate was about 1.4 to the dollar. Today its about 1.06. Thanks alot, George W. Bush. 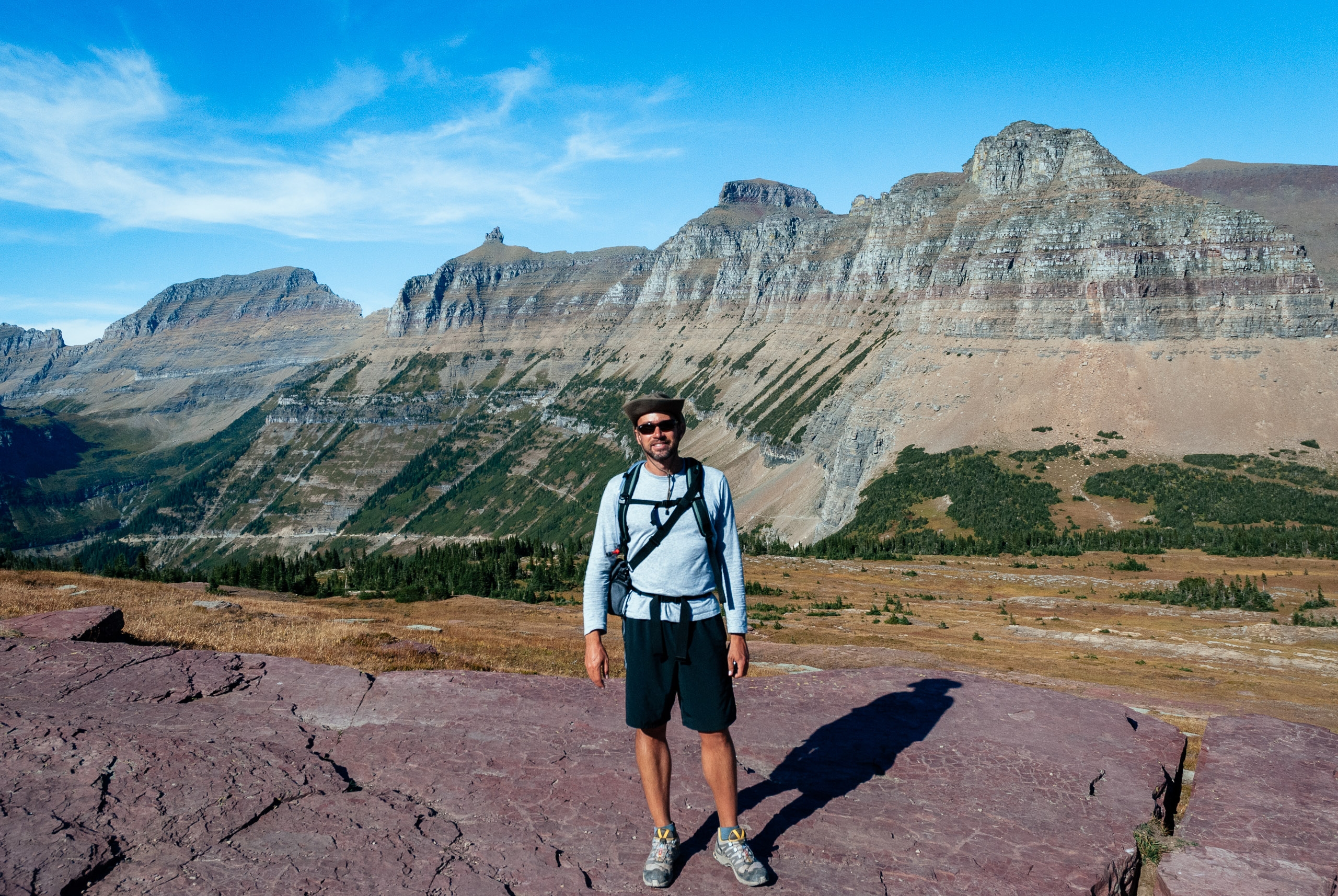