dark mode
Touring London - Day 3: Birthdays, the Tower of London & the London Eye
April 15, 2008
Today was more touring around London's more notable tourist destinations. The day started early with a surprise breakfast of chocolate cake and champagne. Not a surprise to me, though. I had snuck off the night before and arranged with the concierge some sort of surprise for breakfast on Jessica's birthday. The original thought was some kind of continental breakfast with candles and a glass of champagne. Given the last minute nature of my request, all they could muster was an amazing ganache cake, a bottle of French of champagne and some muffins. The chef did write a nice birthday note in chocolate on the plate, and the surprise was greatly effective. If you've never had chocolate cake and champagne for breakfast, do so soon. 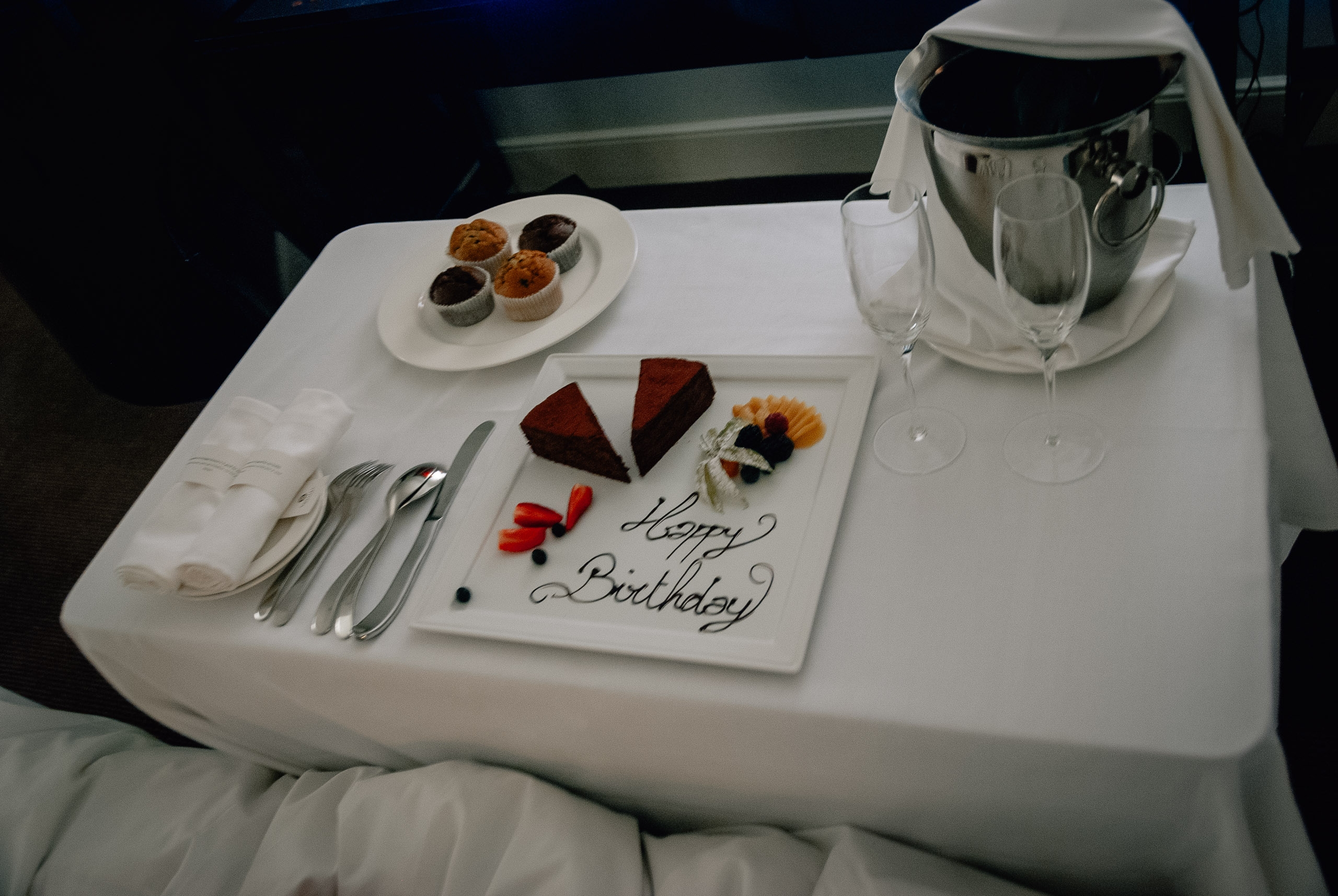 The first stop was the short walk back to Buckingham Palace for the actual changing of the guard ceremony. As I mentioned yesterday we showed up only to learn that he ceremony is done every other day in the off season. The crowds were immense, far larger than the day prior so we knew we were on the right track. We weren't able to get very close, despite arriving a half hour early. Many of the guide books are loathe to recommend attending this event, and I would now have to agree. I suppose if you're front and center and can see all the pomp and circumstance, then maybe, but otherwise the whole experience is pretty exhausting from the crowds. We agreed the Changing of the Guard is a bust. 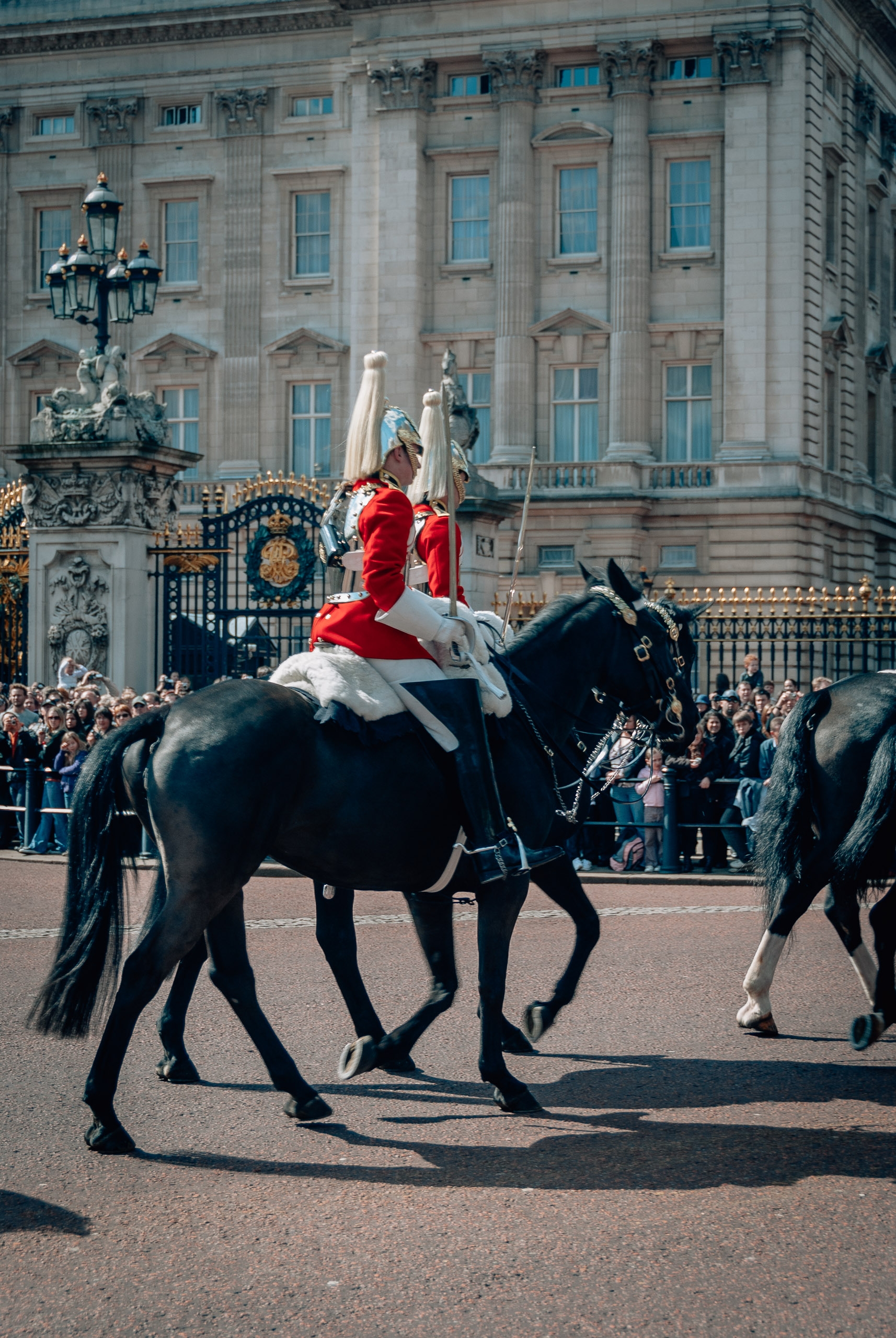 About all we saw of Changing of the Guard

After that disappointment, we got back on track by checking off another culinary pursuit, Indian food. We headed up to SoHo and had two chicken thali dishes that were both delicious and reasonably priced (for London). Full of curry, we headed off the next big tourist stop of the day, the Tower of London.

The Tower is a must see, for tourists, history buffs or people who like castles and big ancient buildings. Originally built around 1000AD, the tower evolved into a series of fortresses and castles serving various uses over the past 1,000 years. Prisoners were held (and tortured) there, kings waited out sieges and conducted royal business and the military established its armories. Today the main draw is the storage place for the Crown Jewels, on display to the general public. These include the Queen's various crowns, the Scepter of the Sovereign, orb, swords and various other jewel-encrusted implements. The largest cut diamonds in the world are on display here as well, including the Star of Africa, the Cullinan I and others looted from India. If the Royal Family derives its power from its implied wealth, that wealth is on display here. 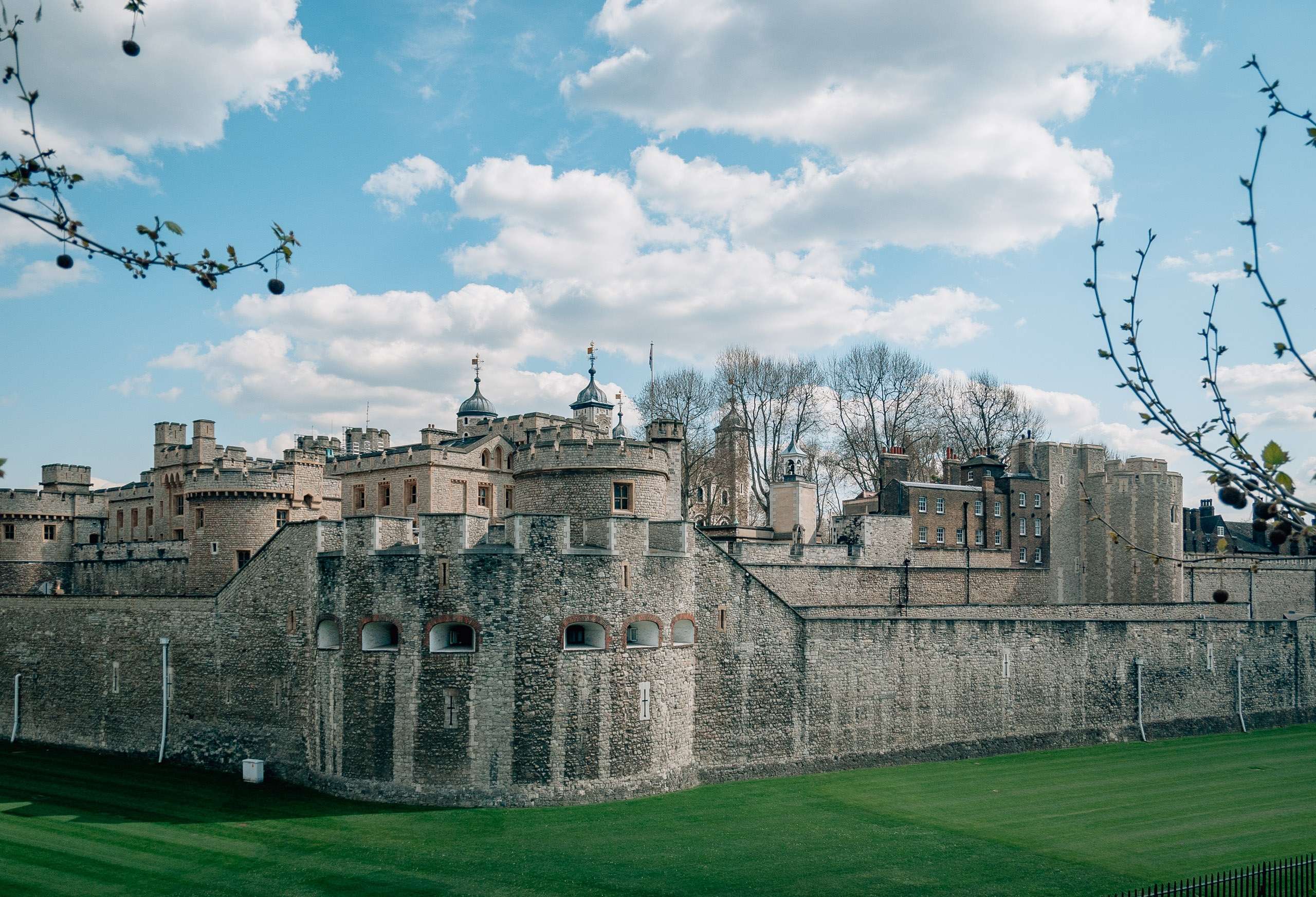 Outside the Tower of London

Since the Royal Family has become more financially independent from the State of Great Britain, they've been pimping out the display of these jewels as a means of income. Today the cost of supporting the Monarchy is about 60 pence ($1.20) per British subject per year. As the official head of State, the Queen is paid this amount from taxation, but is left to raise funds by whatever means necessary. (Displaying the jewels, tours of private residences such as Kensington Palace). Much was made when JK Rowling, author of the Harry Potter line of books, recently exceeded the Queen's net worth. The role of the Monarchy, while comfortably questioned openly, probably won't be changing soon. The Brits love their queen, and American tourists eat this stuff up as well. 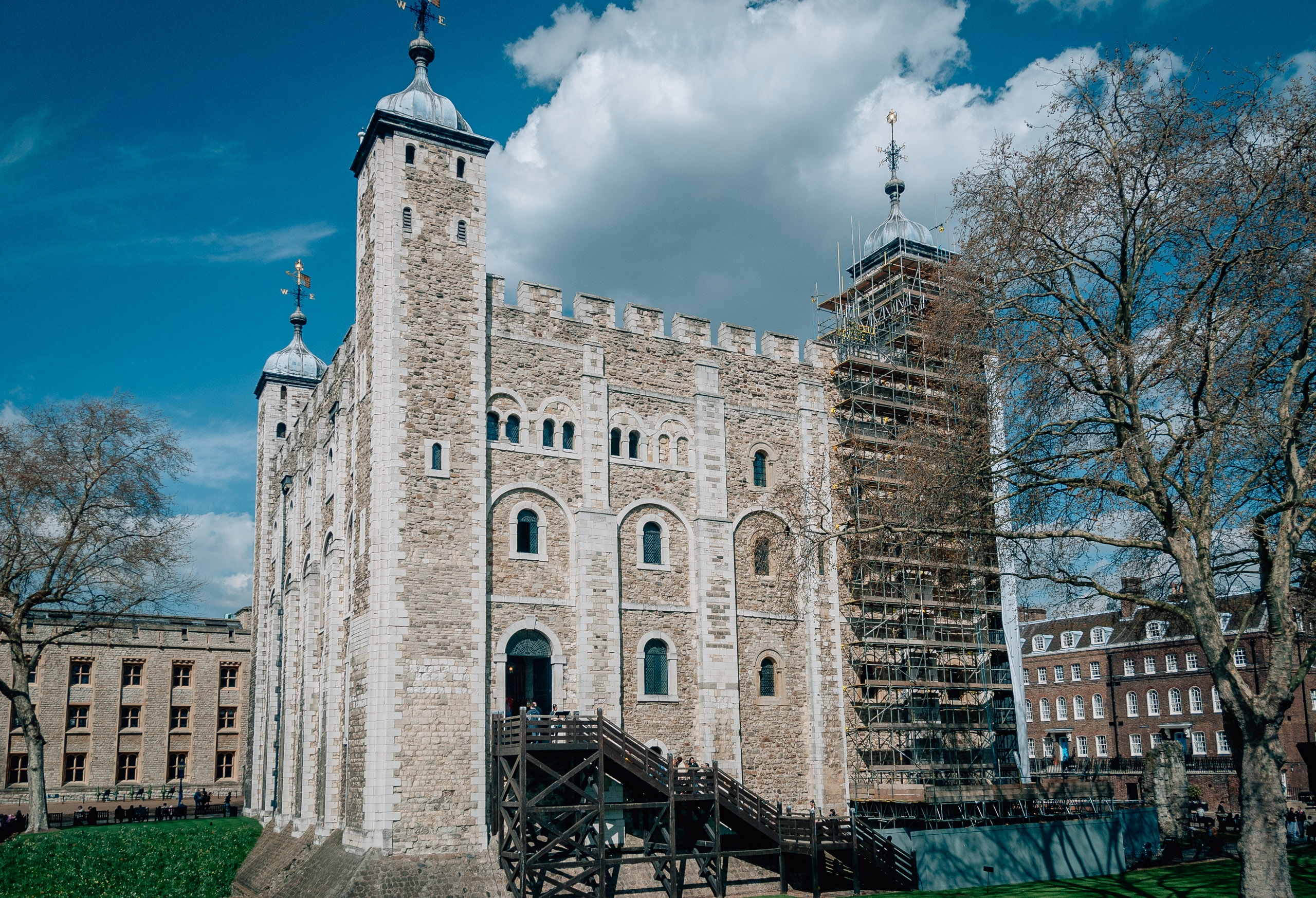 The White Tower inside the Tower of London 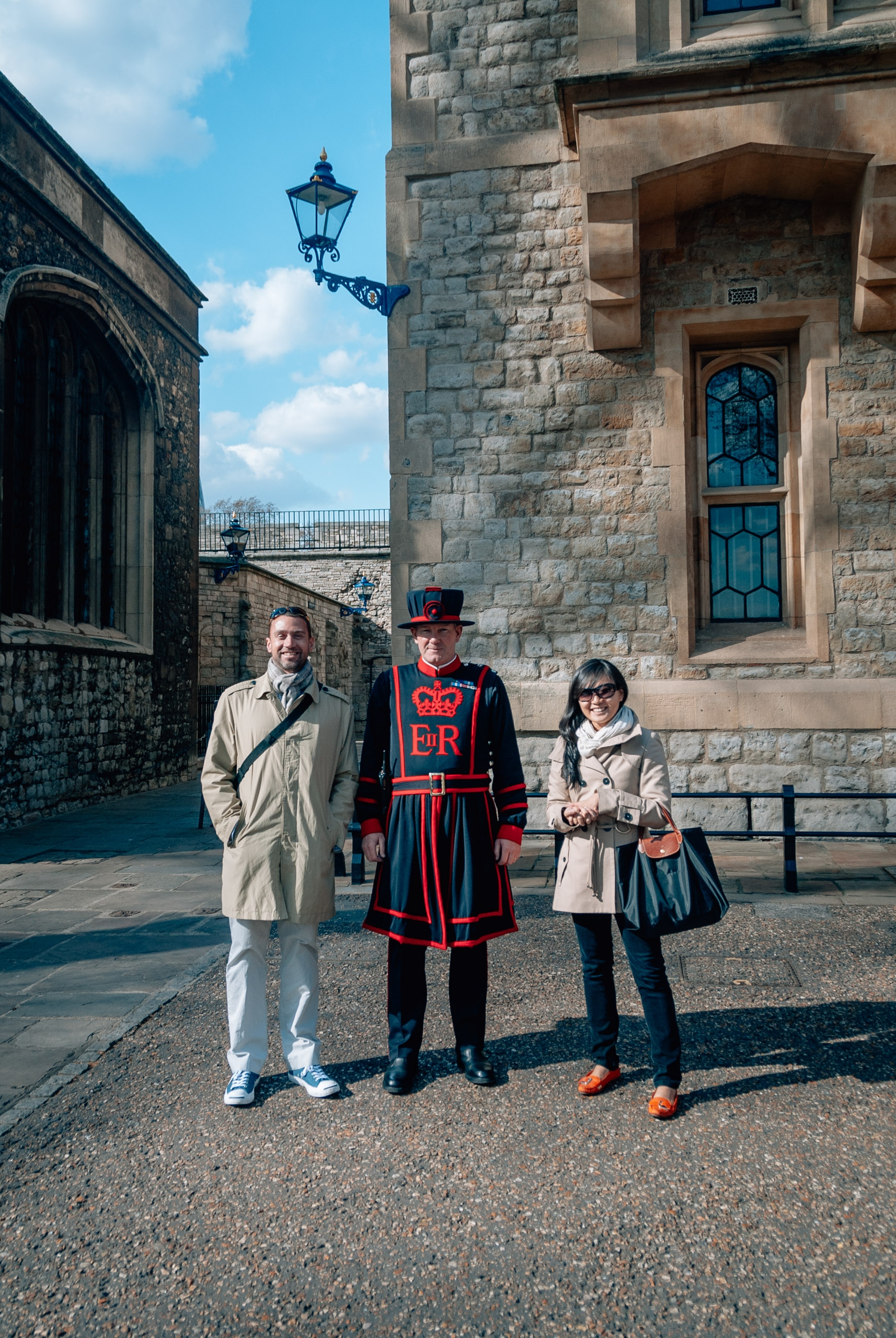 Yeoman Ward at the Tower of London

Back to the Tower, they've done a great job of making the Tower of London an enjoyable and educational visit. There's lots to see there, but it can be a bit much. One American tourist, it might have been me, remarked, "I'm a little a towered out". There are lots of stairs, and if you don't like heights or cramped spaces or scaling heights in cramped spaces, you might want to choose your Tower tours carefully. We stopped nearby to see the Tower Bridge, a pretty remarkable historic feat of engineering. Later we took the subway back over to Waterloo to ride the British Eye. 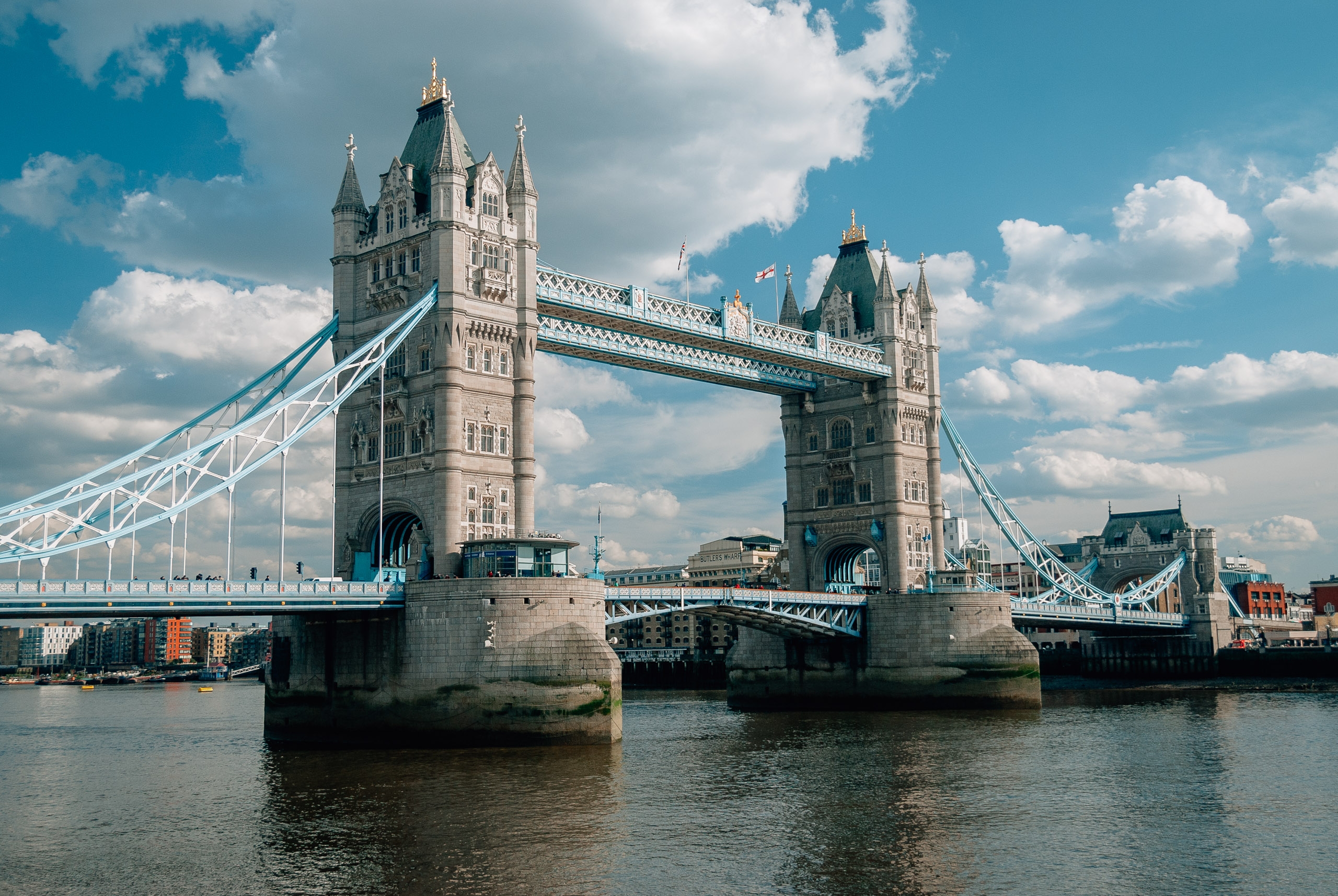 Built for the millennium celebrations by British Airways in 1999, the Eye as supposed to remain for 5 years, but has been such a hit with tourists that it remains a busy attraction today. I highly recommend it. You ride in a very large and spacious glass and steel bubble high over the River Thames and the ride affords great views of London. The ride takes about a half hour, and is best enjoyed in the morning or late afternoon with the sun is less direct. We bought tickets and walked right on, but I hear in the high season you can wait a few hours. Still, I recommend it. London is beautiful city, but not so much from the air. Hong Kong is amazing from about 20 feet up and higher, but London is the same from about 100 feet down. Hard to describe, but looking out over the city you can't help but think, 'Eh..." 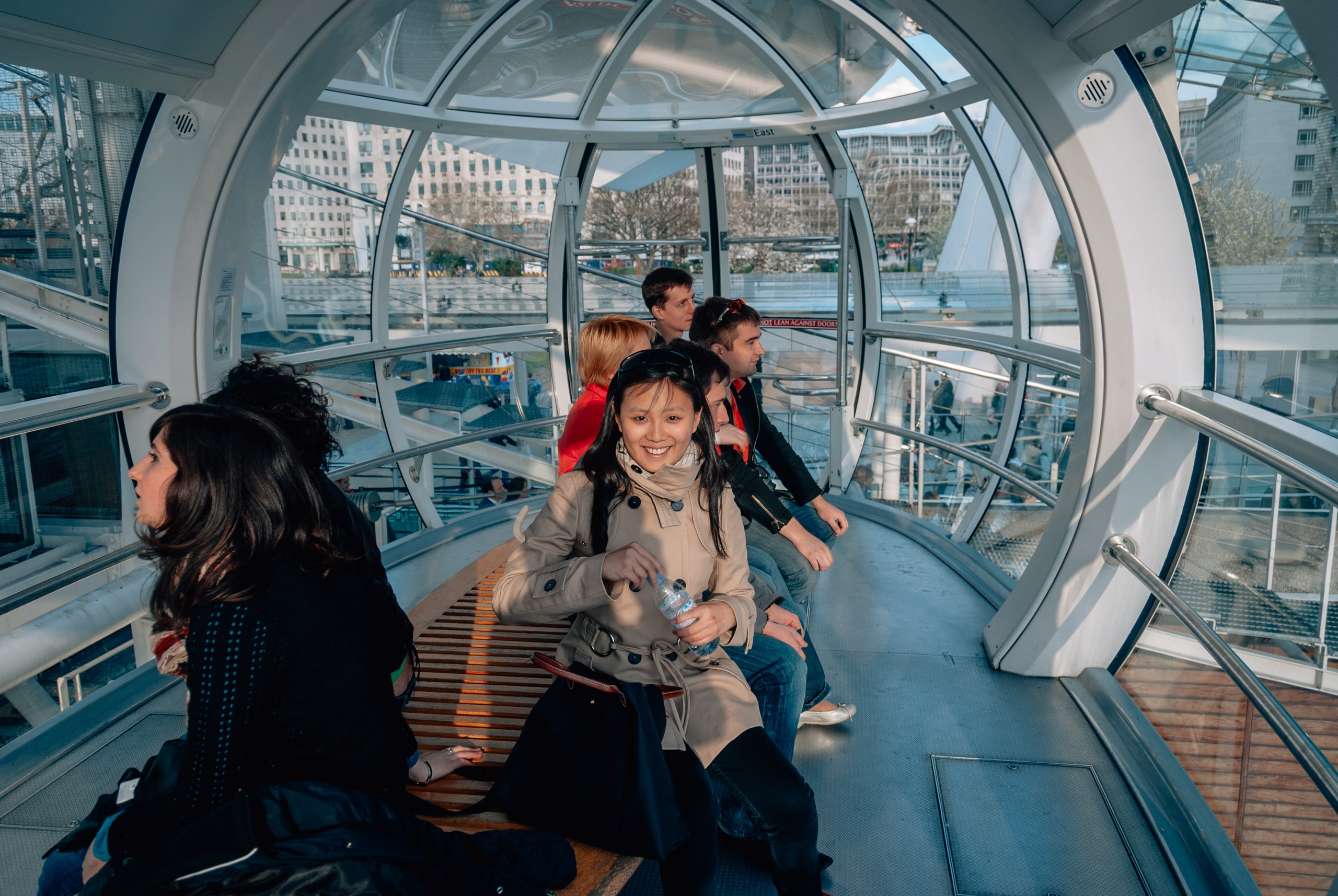 Inside the Glass Bubble at the Eye 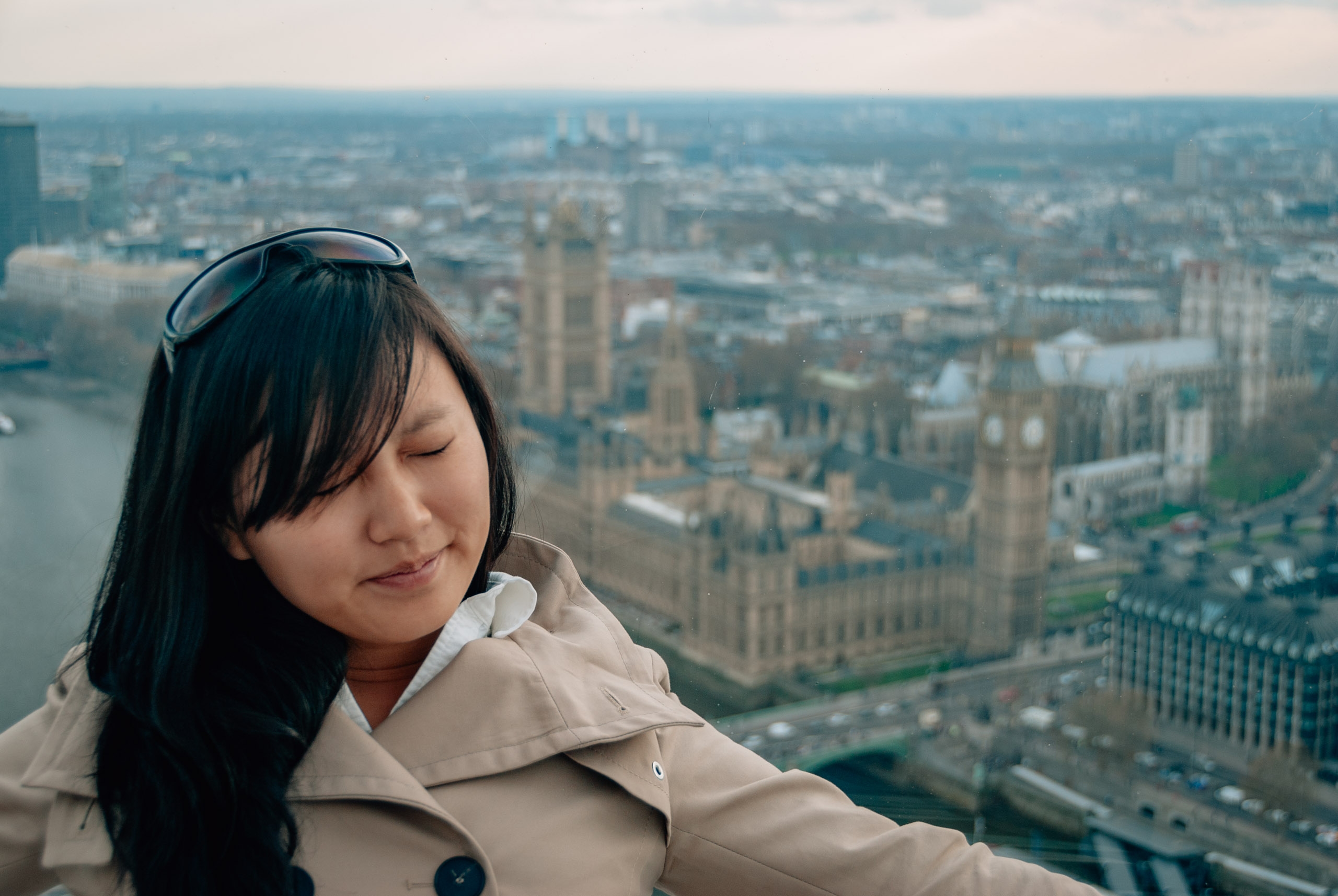 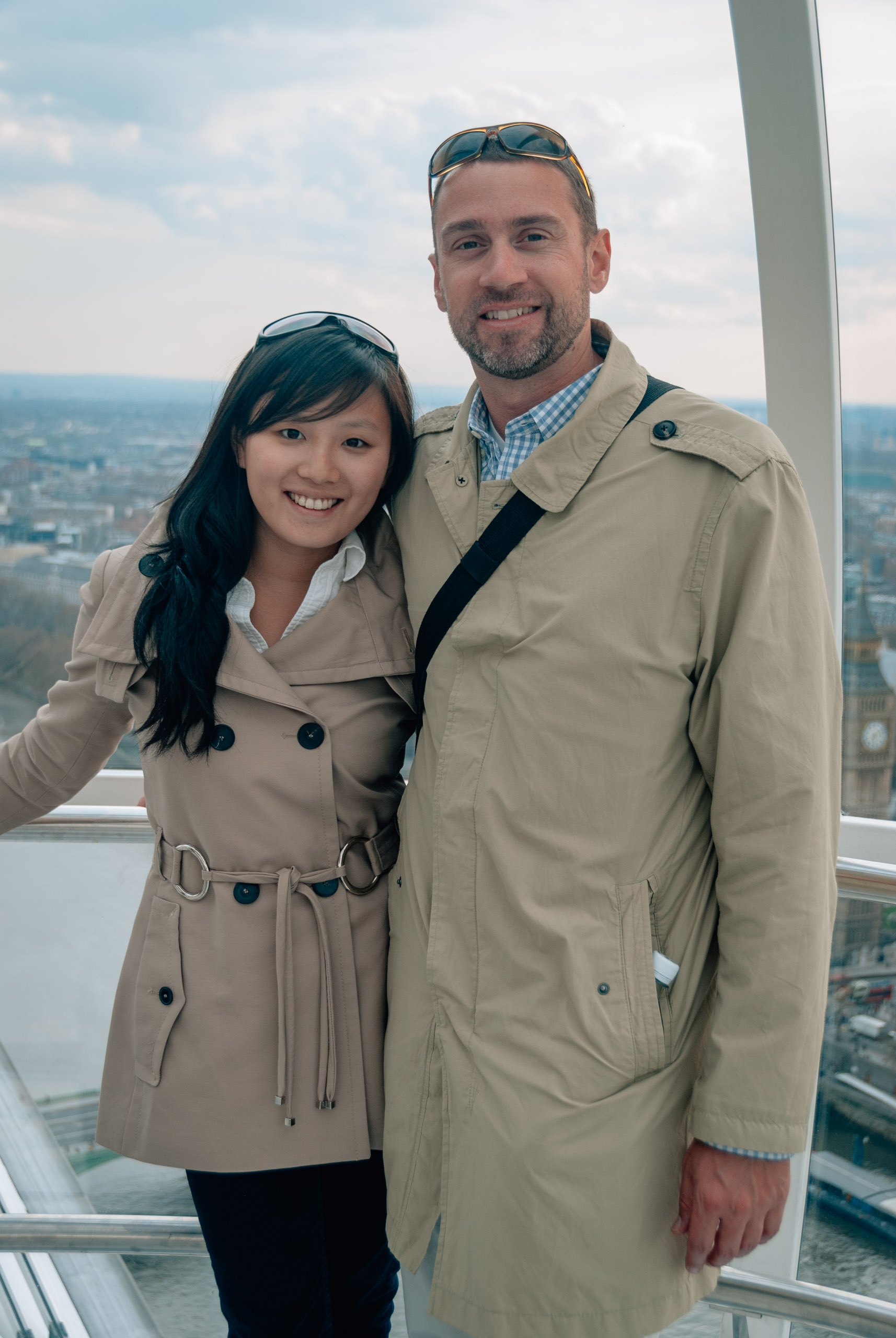 Jessica and I on the Eye

Later the birthday festivities continued with some really good Chinese food at HK Diner in London's Chinatown. Two types of crispy duck and beef proceeded by corn and crab soup. Afterward, we went out to a few pubs but kept getting last call within 10 minutes of arriving. The bars go all night, but the pubs shutter around 11. Probably a good thing, after a long day of being a tourist, it was nice to turn in early, and it was pouring down rain. 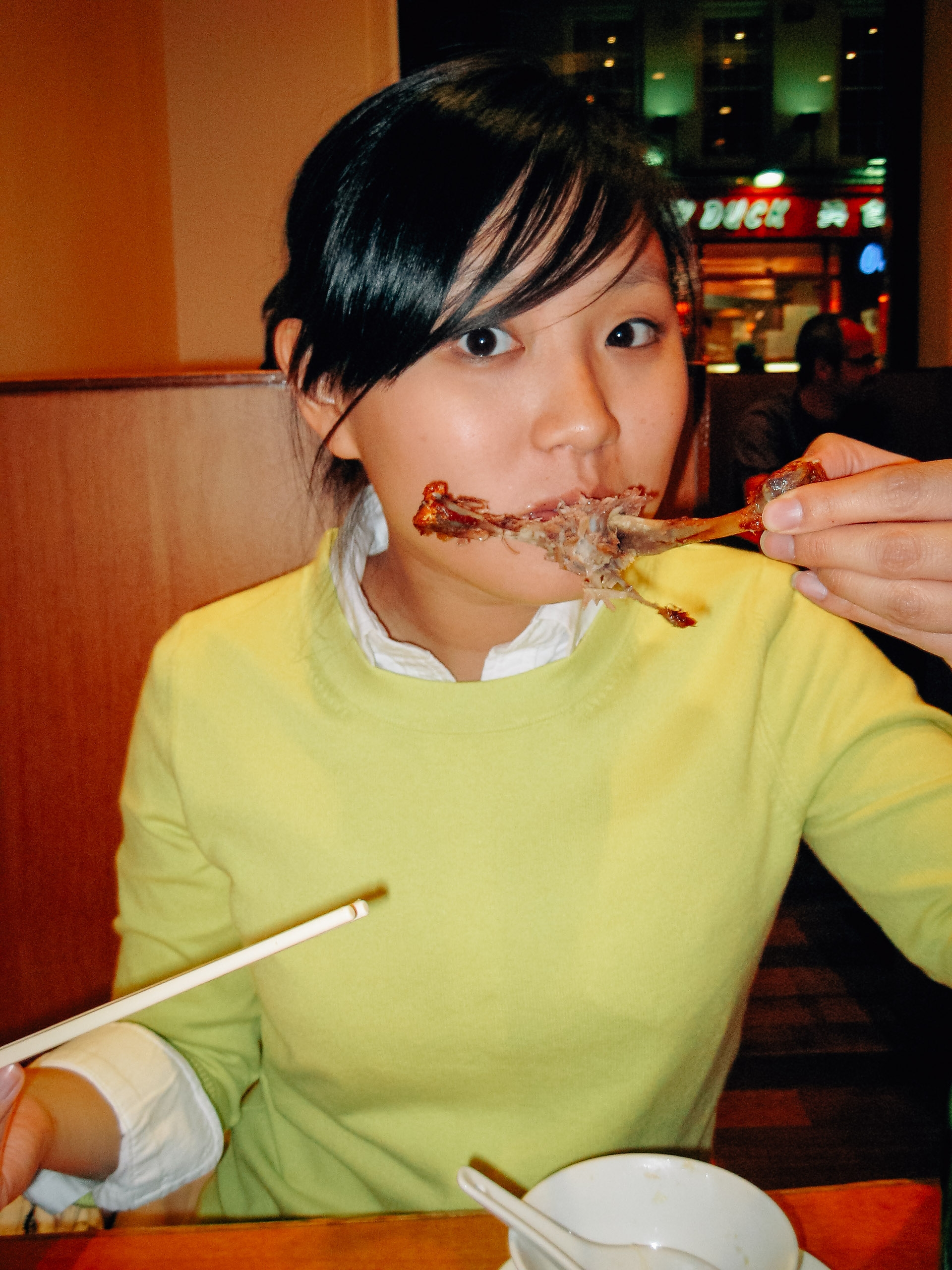 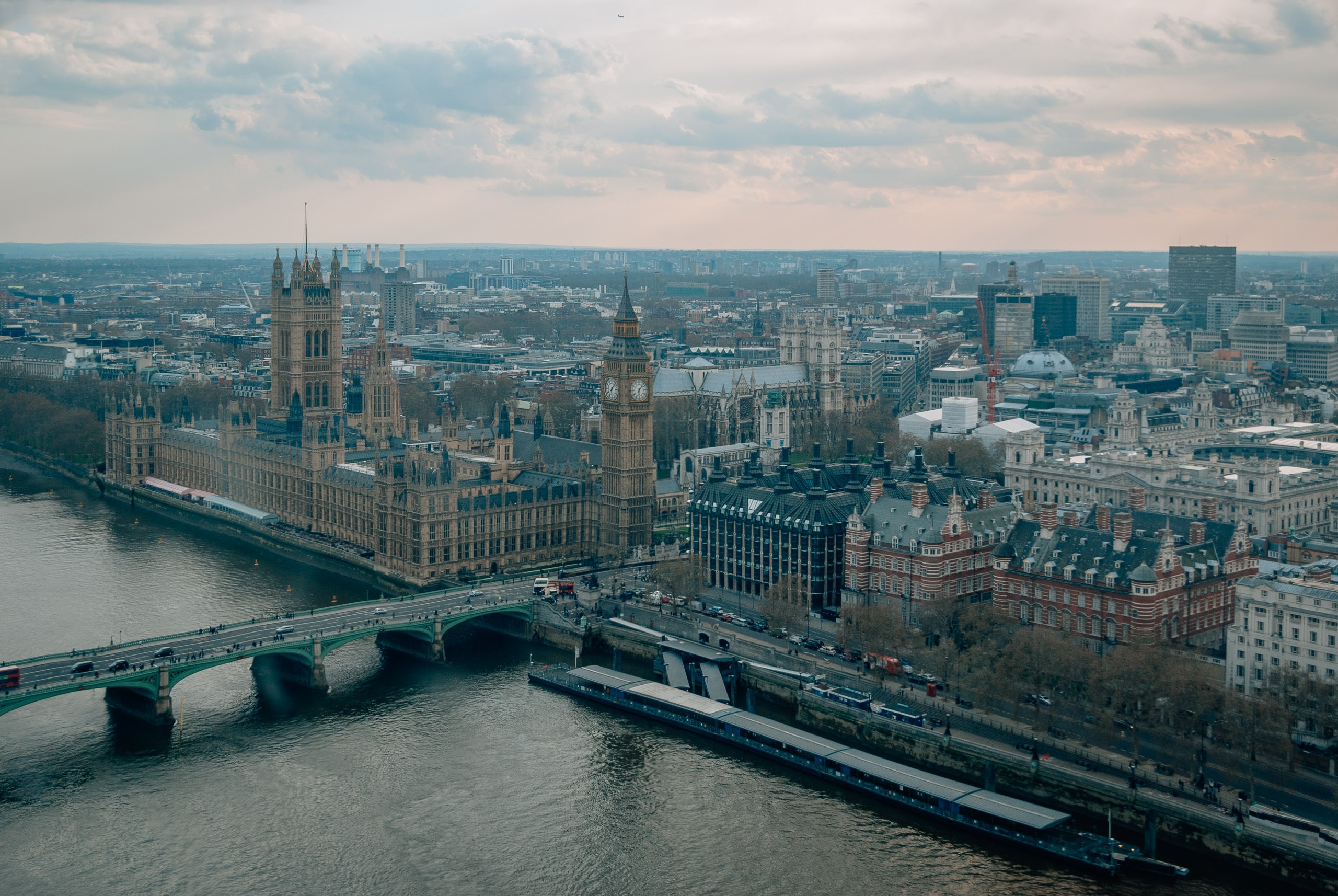