dark mode
Touring Paris - Day 4: Notre Dame, Eiffel Tower & The Louvre
May 05, 2008
Day 4 in Paris was the Parisian chamber of commerce tourist greatest hits day. As such this post is primarily pictures as they speak for themselves. The weather had been mostly gray and gloomy all week, but the forecast for this day was calling for sunny and warm skies. The plan was to get up early to hit the Eiffel Tower before the crowds, then do other things from there. At 9:30AM, the fog was just lifting off the ground and there was no blue sky in sight. So, change of plans, we decided to walk down to Notre Dame, a perfect setting for a gray day. 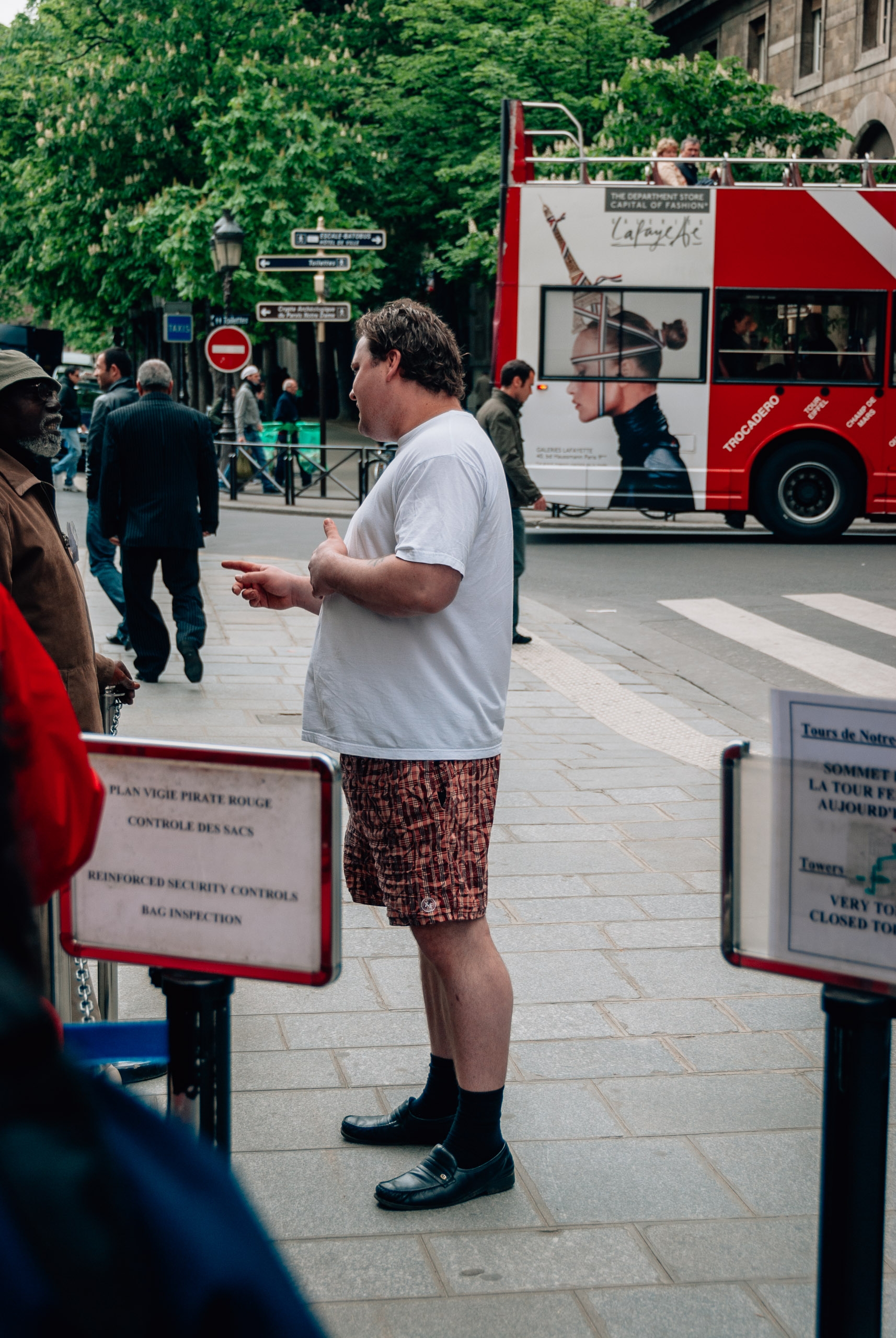 Some jackass outside Notre Dame 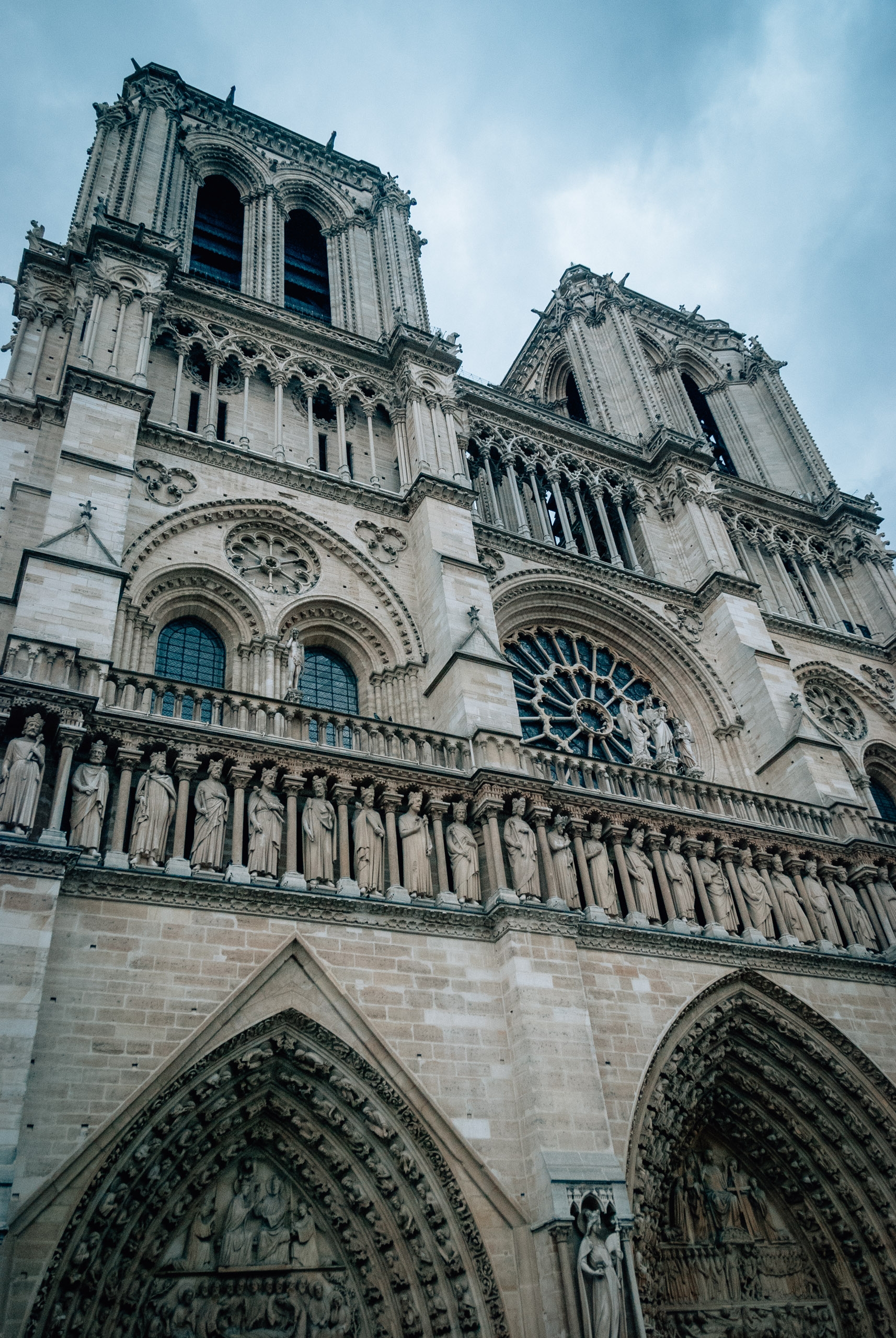 On both of my previous trips to Paris, Notre Dame was undergoing some work and kept visitors from climbing the steps to take in the view. Since it was open, and we had the museum pass, we decided to check it out. The wait was about a half hour but well worth it. 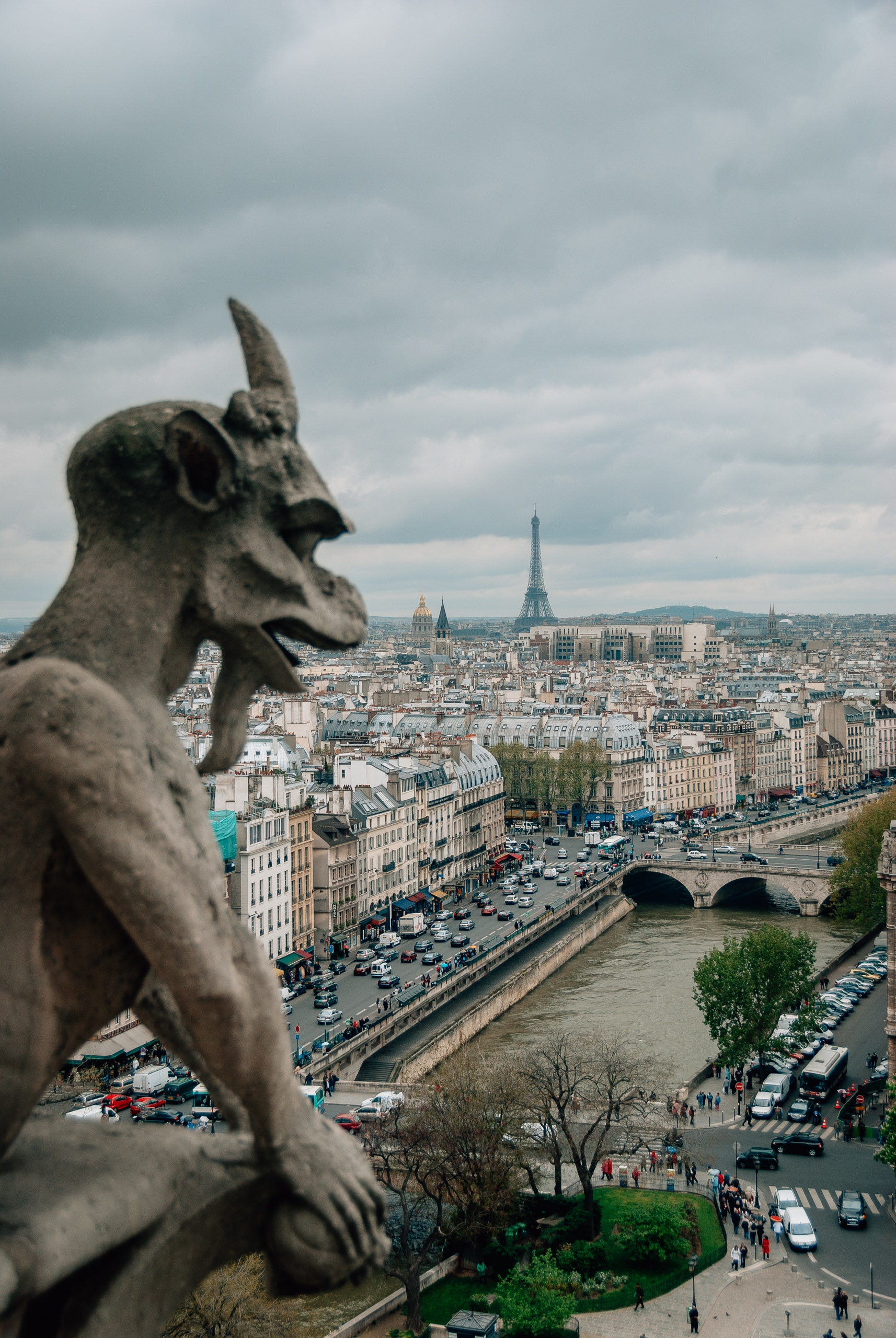 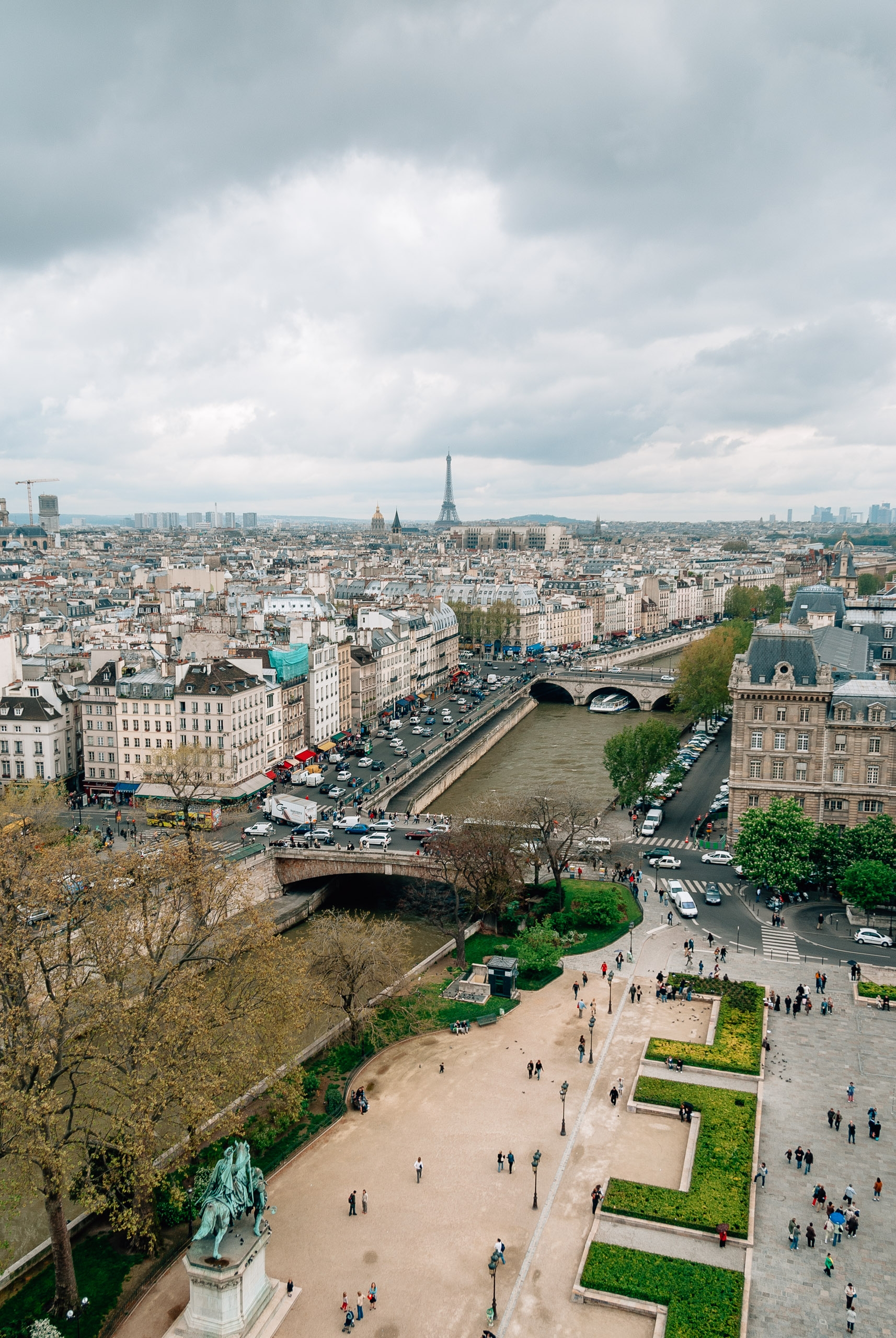 The View from Notre Dame

The outside of the church is lined with gargoyles, thought to protect the building by scaring off evil spirits. They seem effective, as they're pretty creepy. Time and acidic water have dulled their features a bit, but their poses and expressions are still visible up close and worthy of closer inspection. 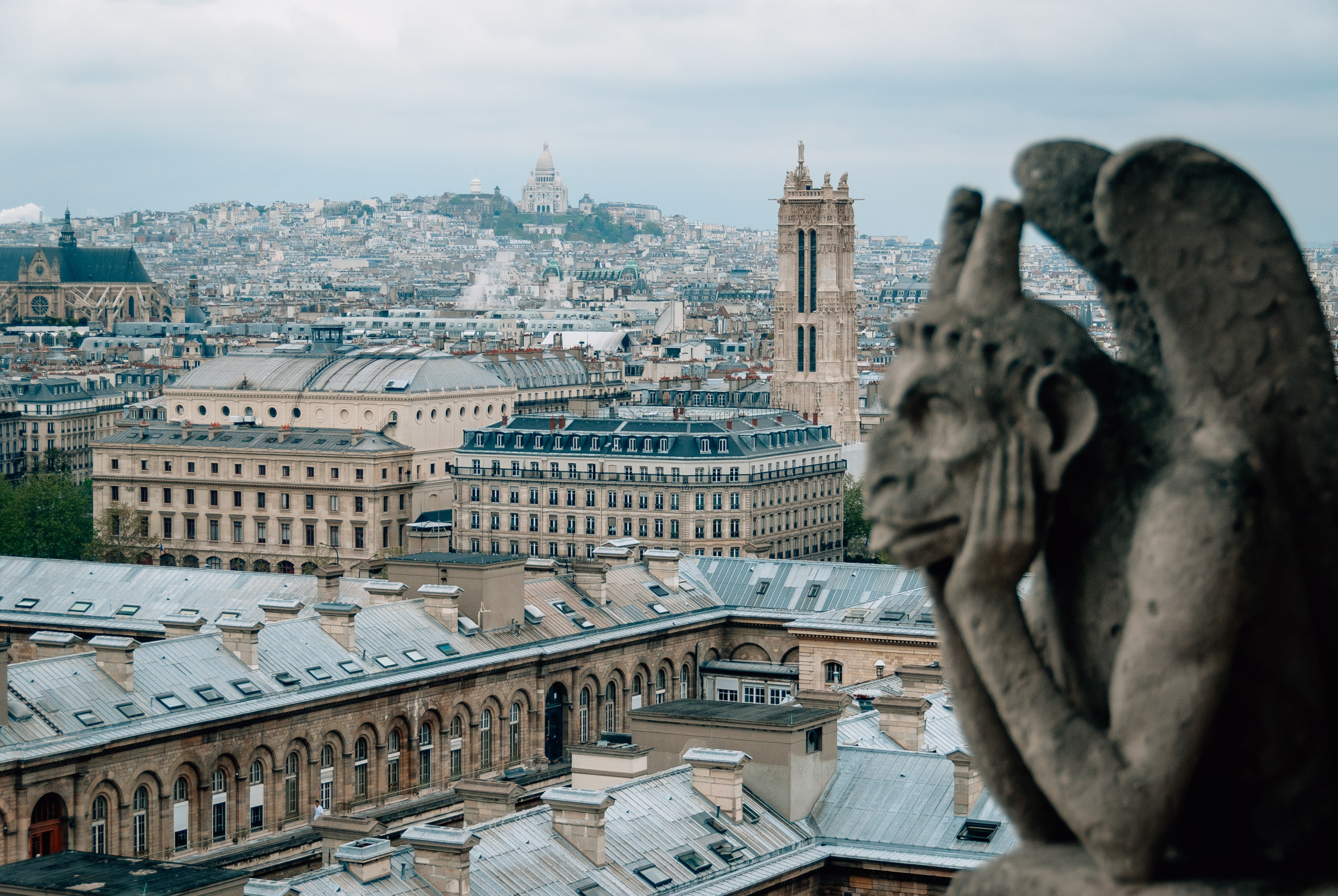 The bored gargoyle with a view of Monmarte in the background

From Notre Dame, we boarded our tour bus and headed over near the Opera House to browse some of the famed department stores, including Galleries Lafayette, and to have some lunch. We dined on pretty respectable Chinese food, and re-boarded our tour bus just as the sky was beginning to clear.

By the time we got to the Eiffel Tower, the sky was nearly completely clear for the first time in a few days. We waited in line about 45 minutes, mostly due to some mechanical delay, before heading to the top of the tower. In my opinion, the views from the lower deck are better as you can more easily see and make out various structures around town. The top is so high its like riding in a plane, but a must-do for all visitors. 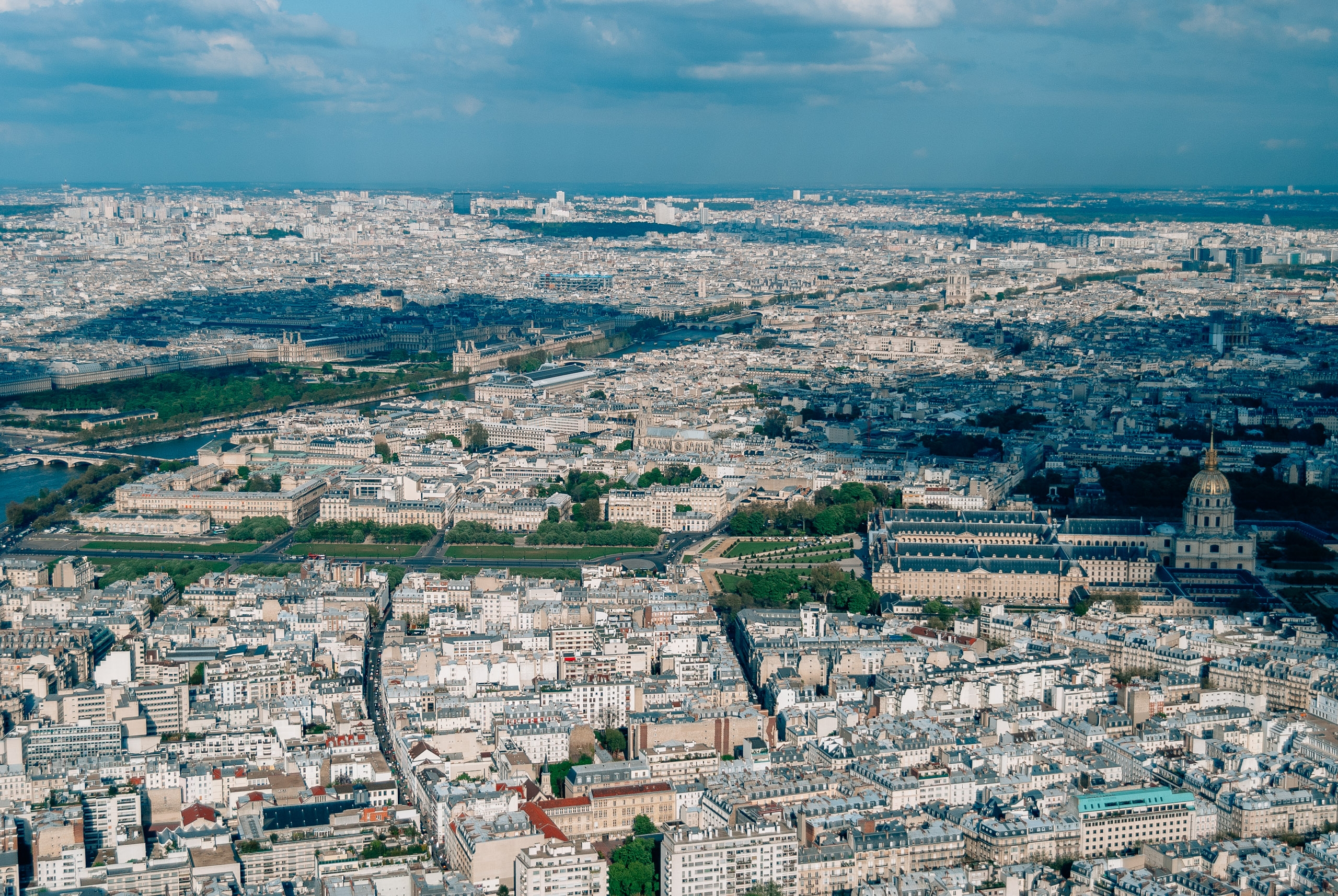 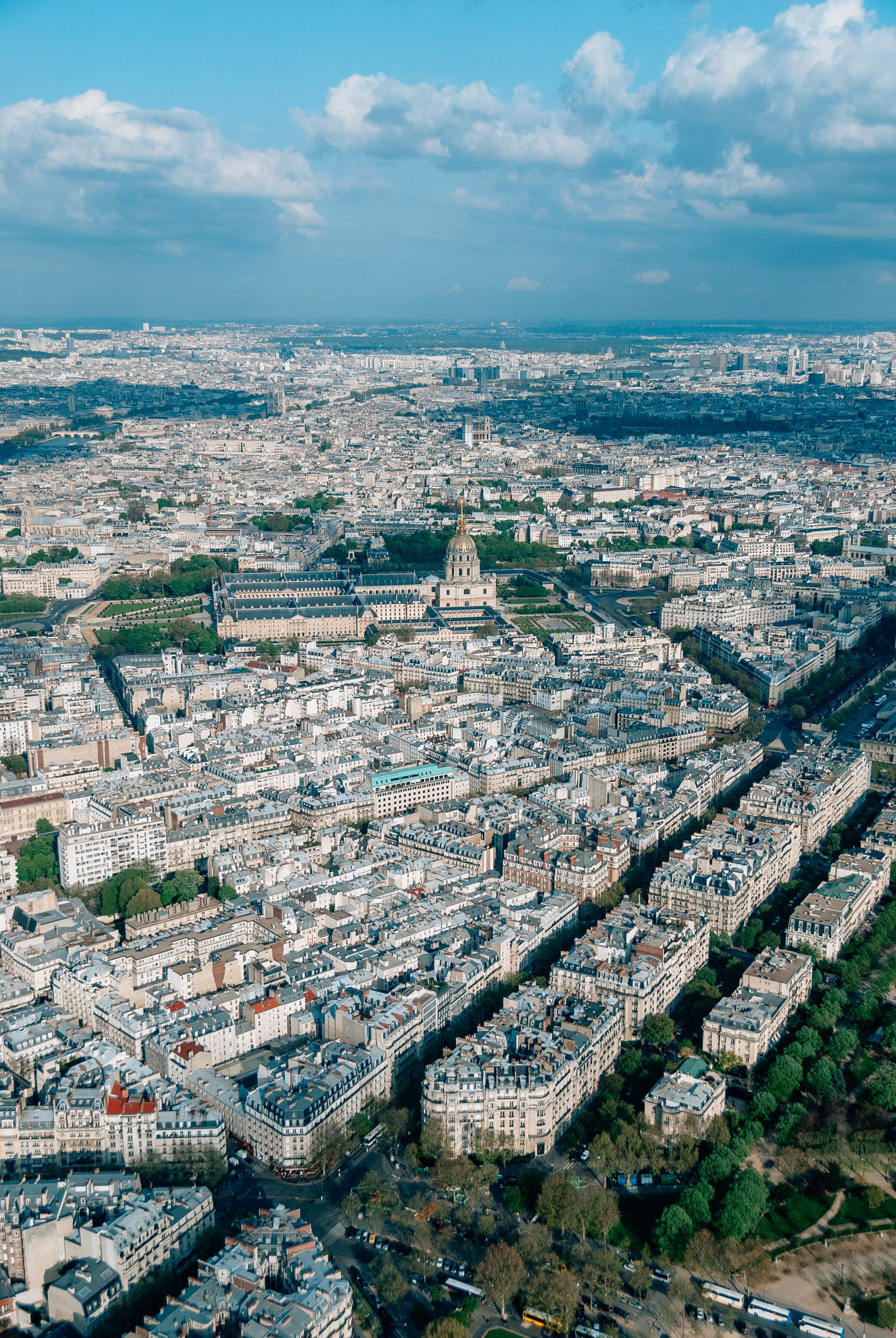 The view from the lower deck 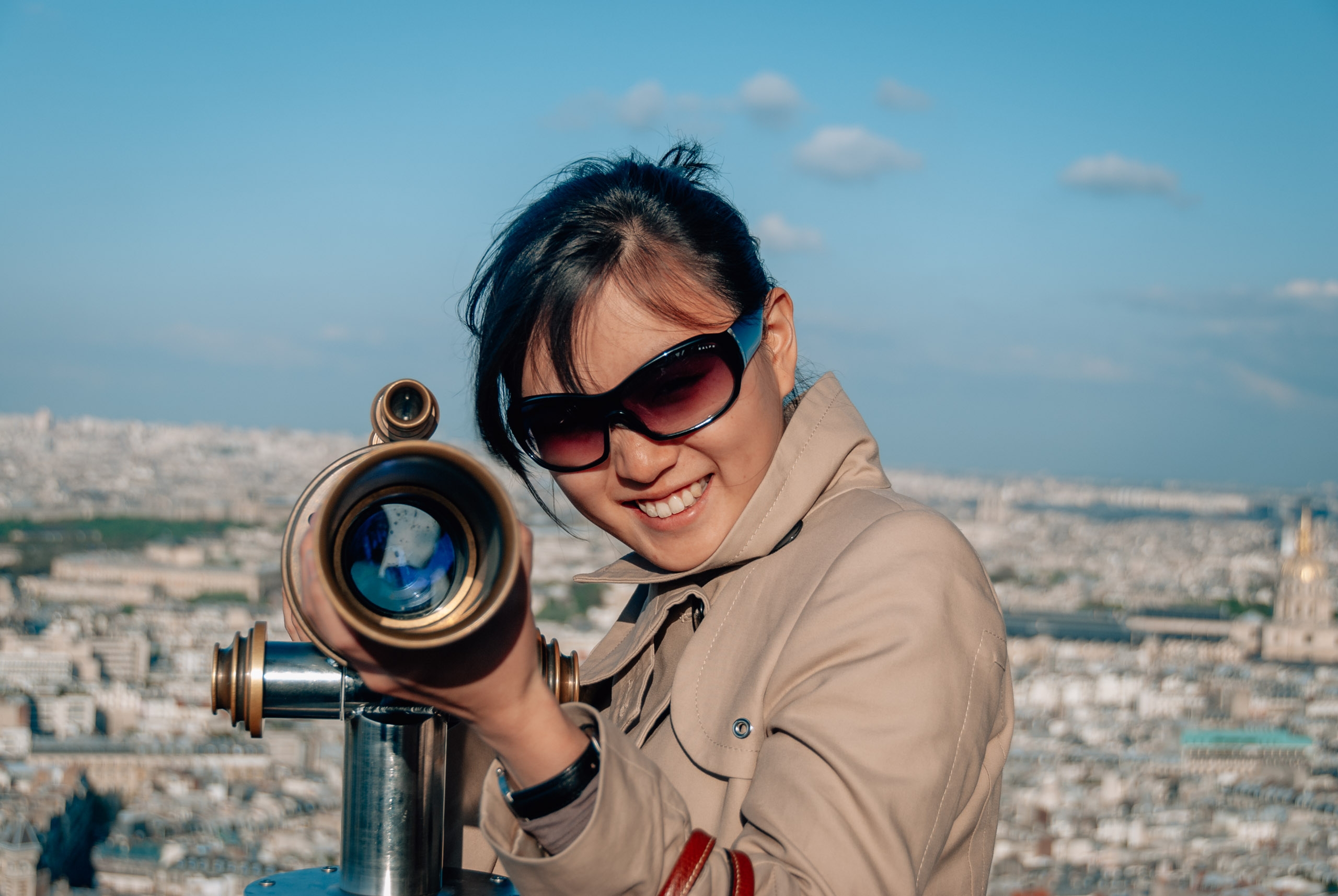 Blasting me with a telescope on the lower deck 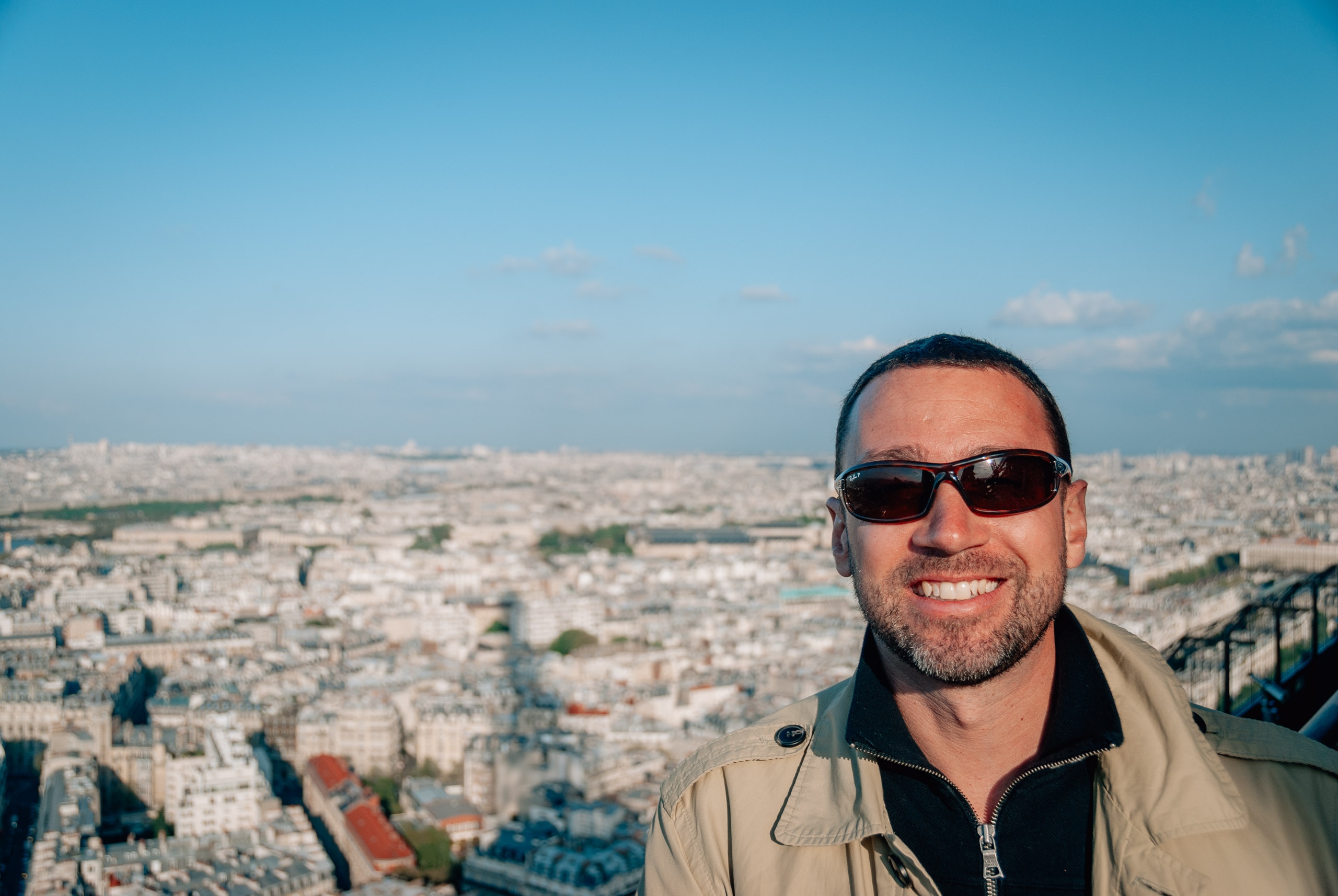 Me on the lower deck

We stayed atop the Eiffel Tower about an hour before heading back down to the river. Our plan was to take a river boat tour while the sun was shining, but we just missed the last one before the dinner cruises started and weren't interested in lousy food aboard a boat. So, we stopped by the little riverside bar and hung out for a while. The setting was nice with the river in front and the Eiffel Tower behind. We were lucky to get such a great break in the weather, and our timing was perfect as long (and I mean LONG) lines were forming to go up the tower for sunset, easily a 2 hour wait. 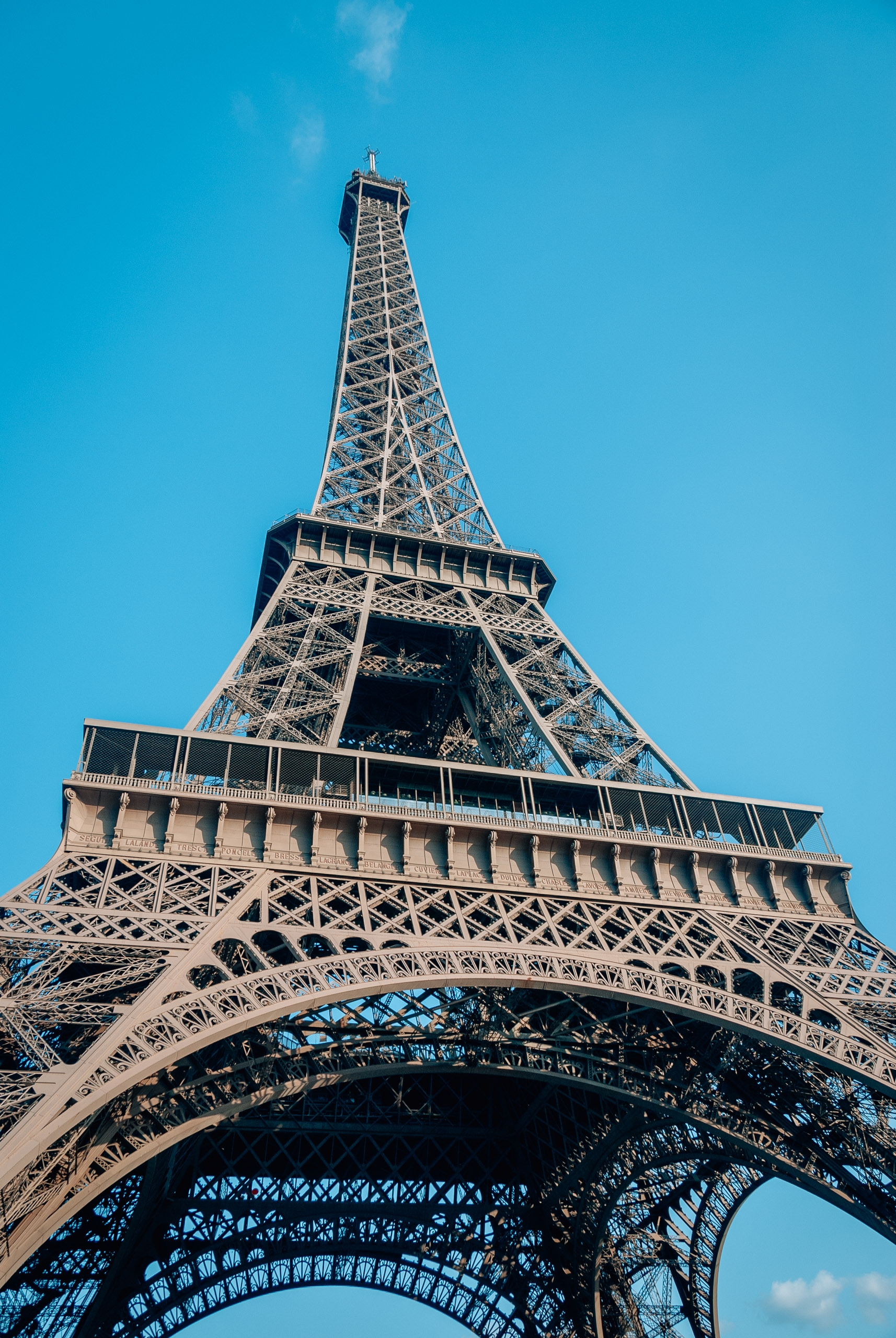 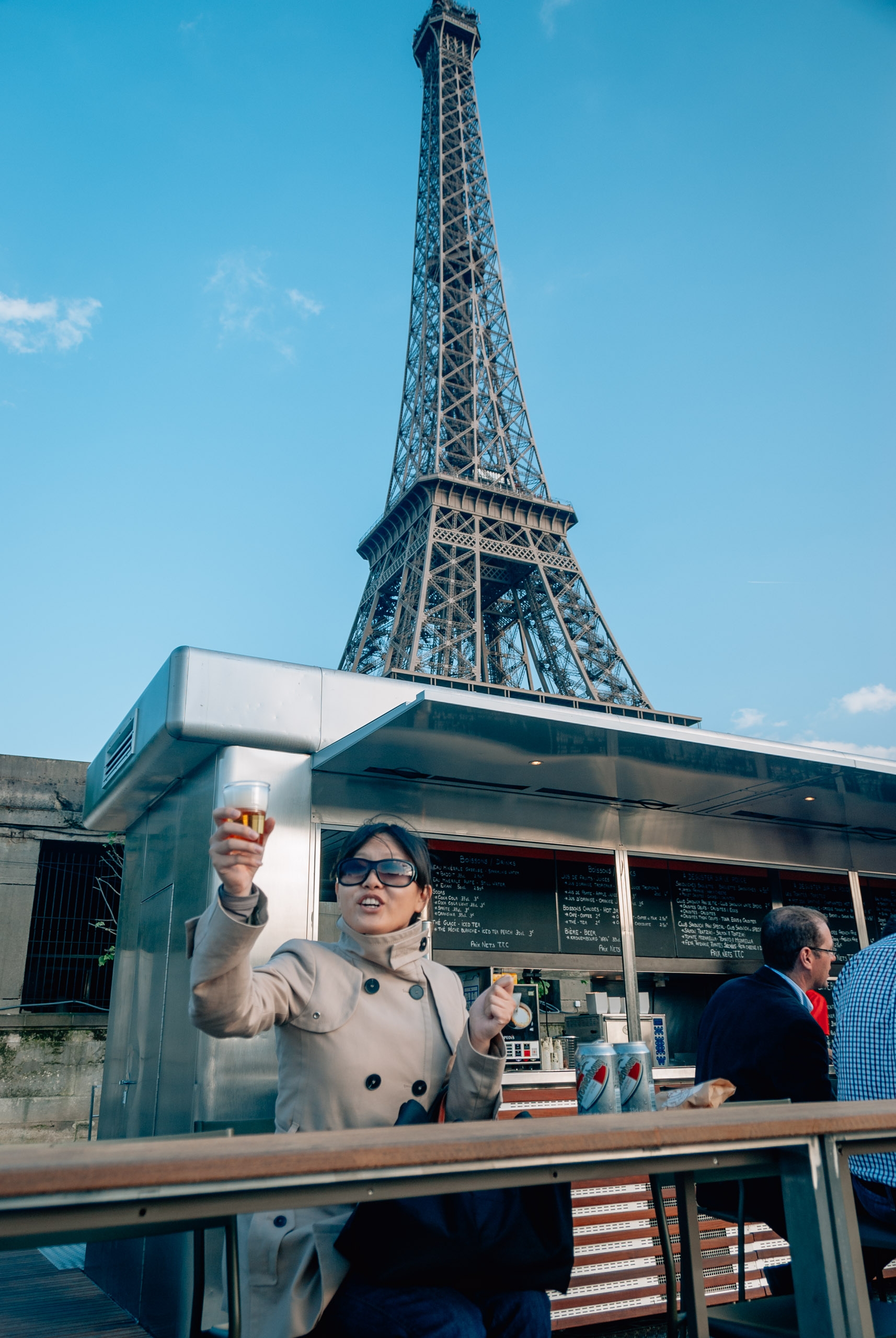 The Eiffel Tower from the River Seine, Cheers!

We walked back to the Metro station and took the RER toward the Louvre before dinner. We decided that since we had both seen the Louvre in its entirety, and we had a museum pass, we would only "stop by" the Louvre and see two of the most famous works of art in the world, the Venus de Milo and the Mona Lisa. Walking toward the Louvre at sunset is highly recommended. 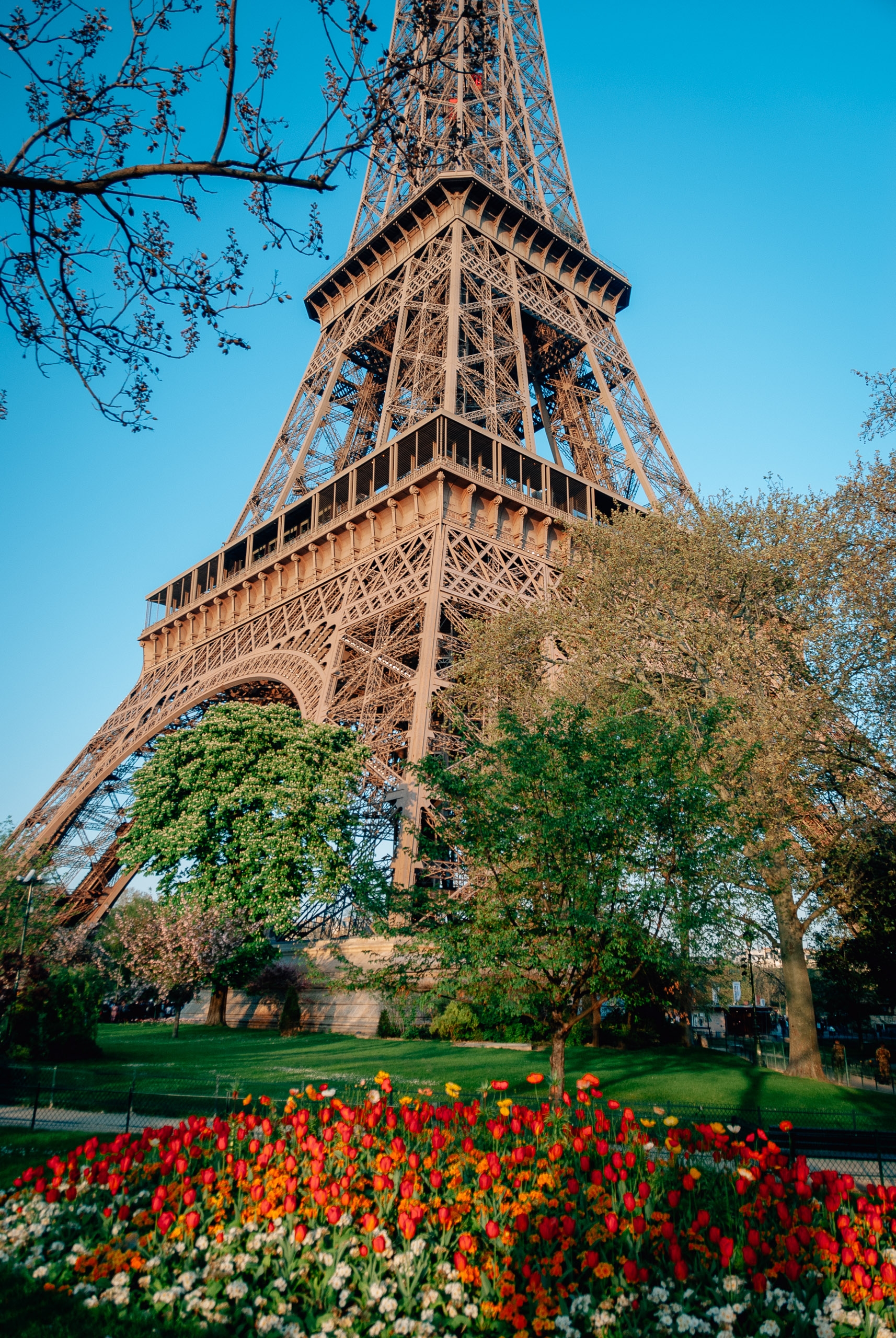 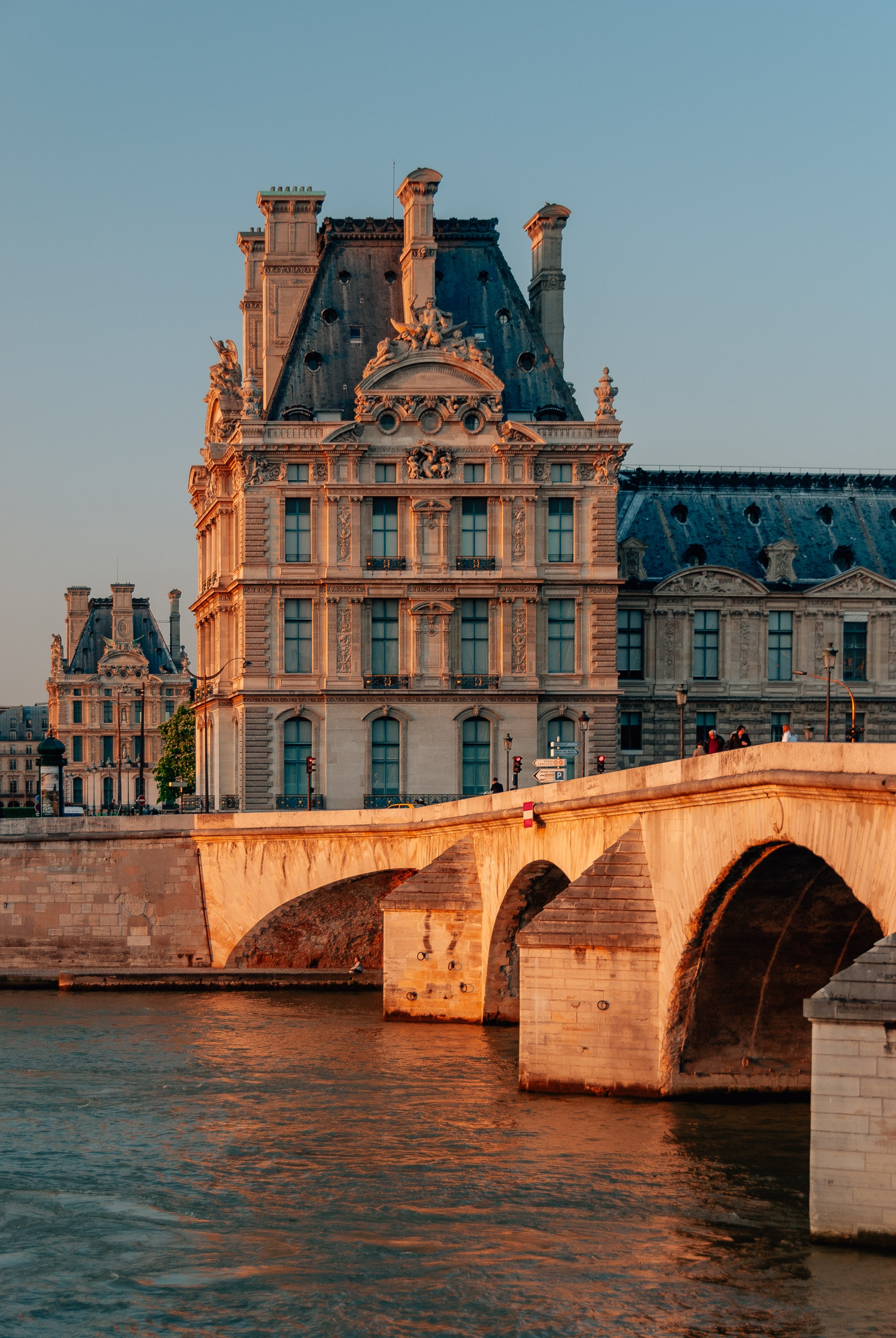 The Louvre is probably the most impressive museum I've seen, outside the Met in New York City. The building itself is magnificent. Next to the Eiffel Tower and the Arc d' Triomphe, the Louvre is one of the City's top tourist attractions, and fittingly so the crowds during peak season can be unbearable. Like most sites, I recommend going early. Getting the museum pass allows you to bypass the ticket line, and you can see as much of the museum as you like and enjoy it at a leisurely pace in bits and pieces. The collection is enormous and you'll grow tired of it if you try to see it all at once. Tip: the museum is open late on Wednesdays and Fridays until 9:00PM. Your best bet to avoid crowds is to arrive around 6:00PM on a Wednesday and stay until closing. I didn't find any hidden messages in the Mona Lisa, nor was I chased by a crazed albino monk, so I count myself among the lucky ones. 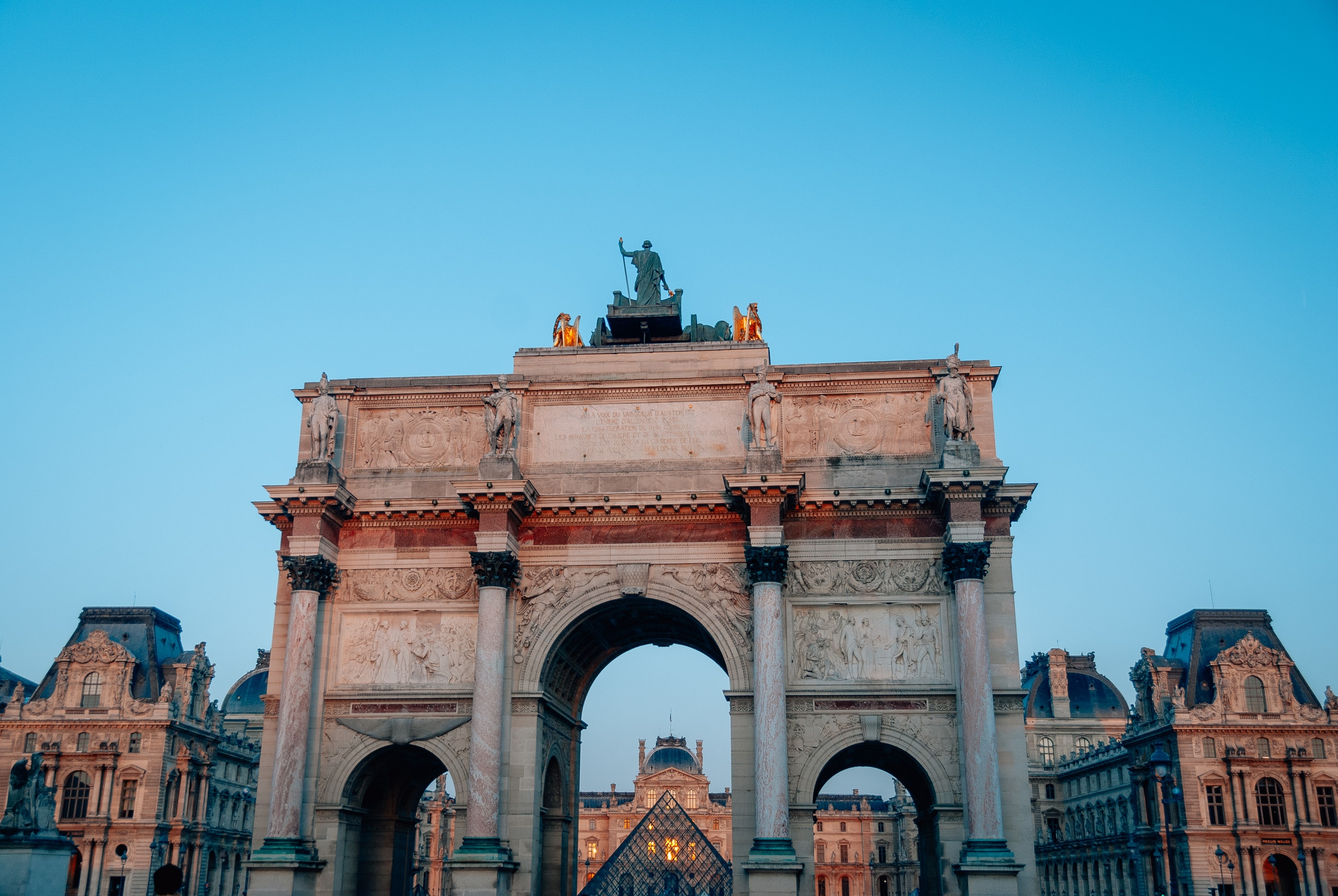 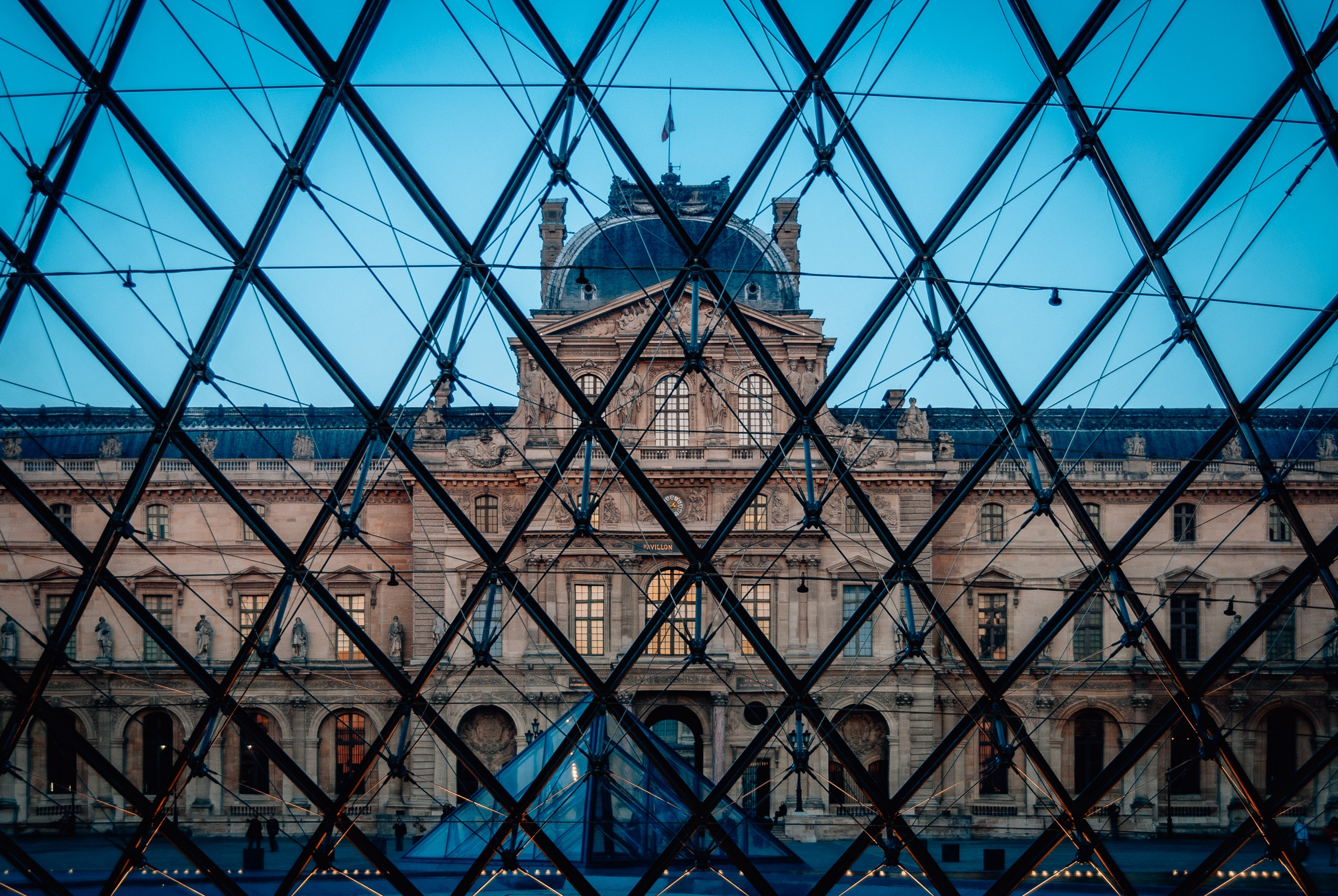 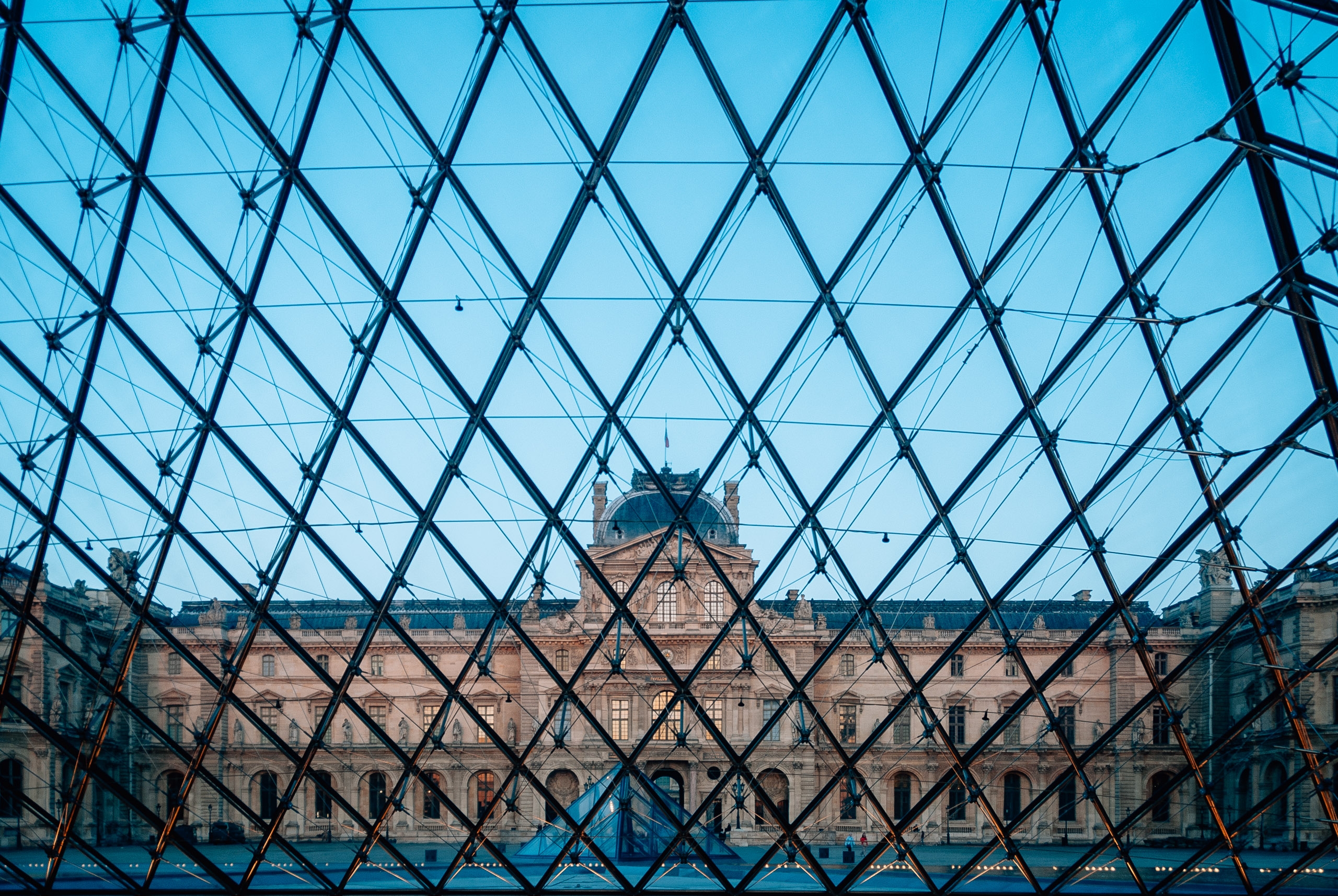 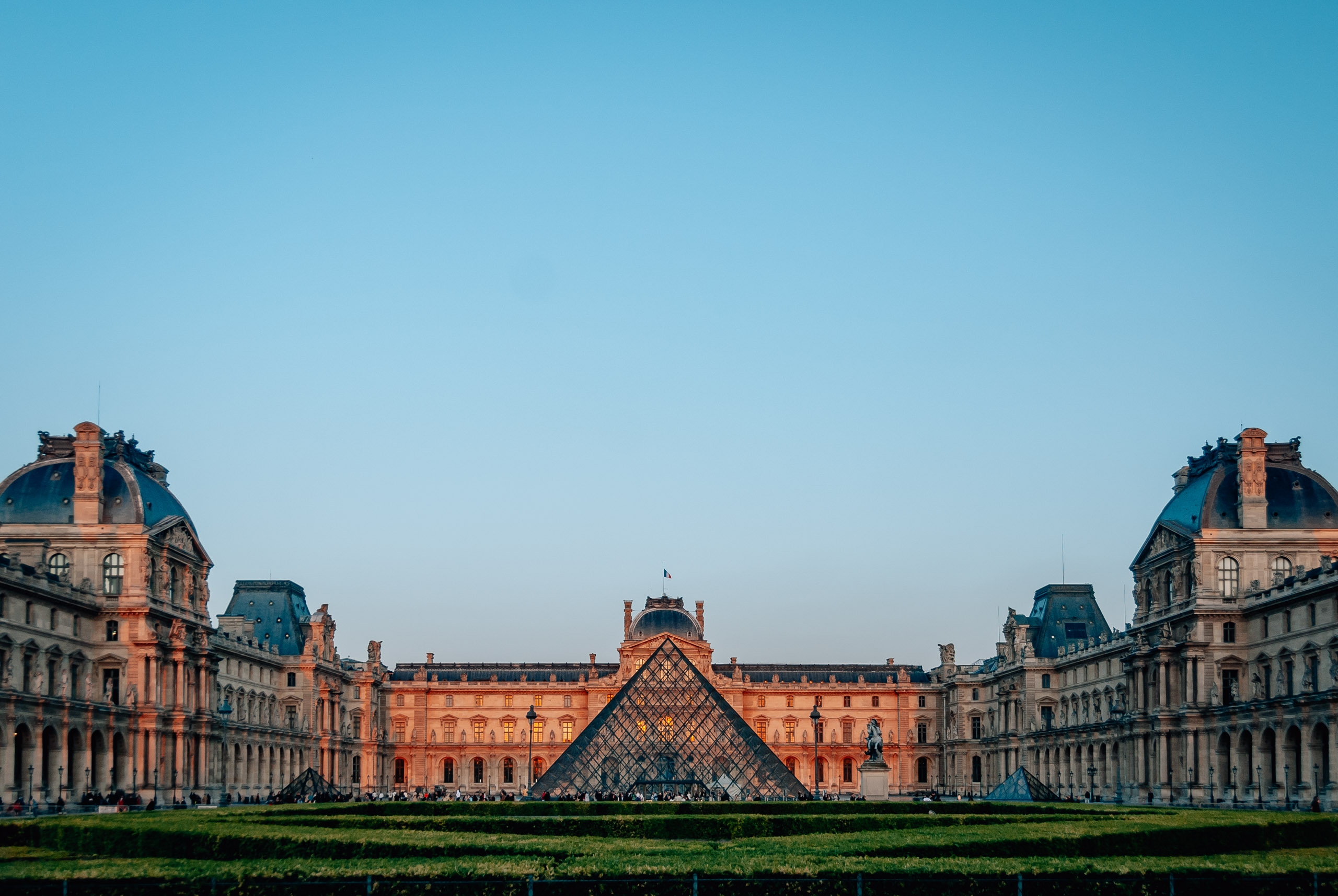 The Louvre at Sunset 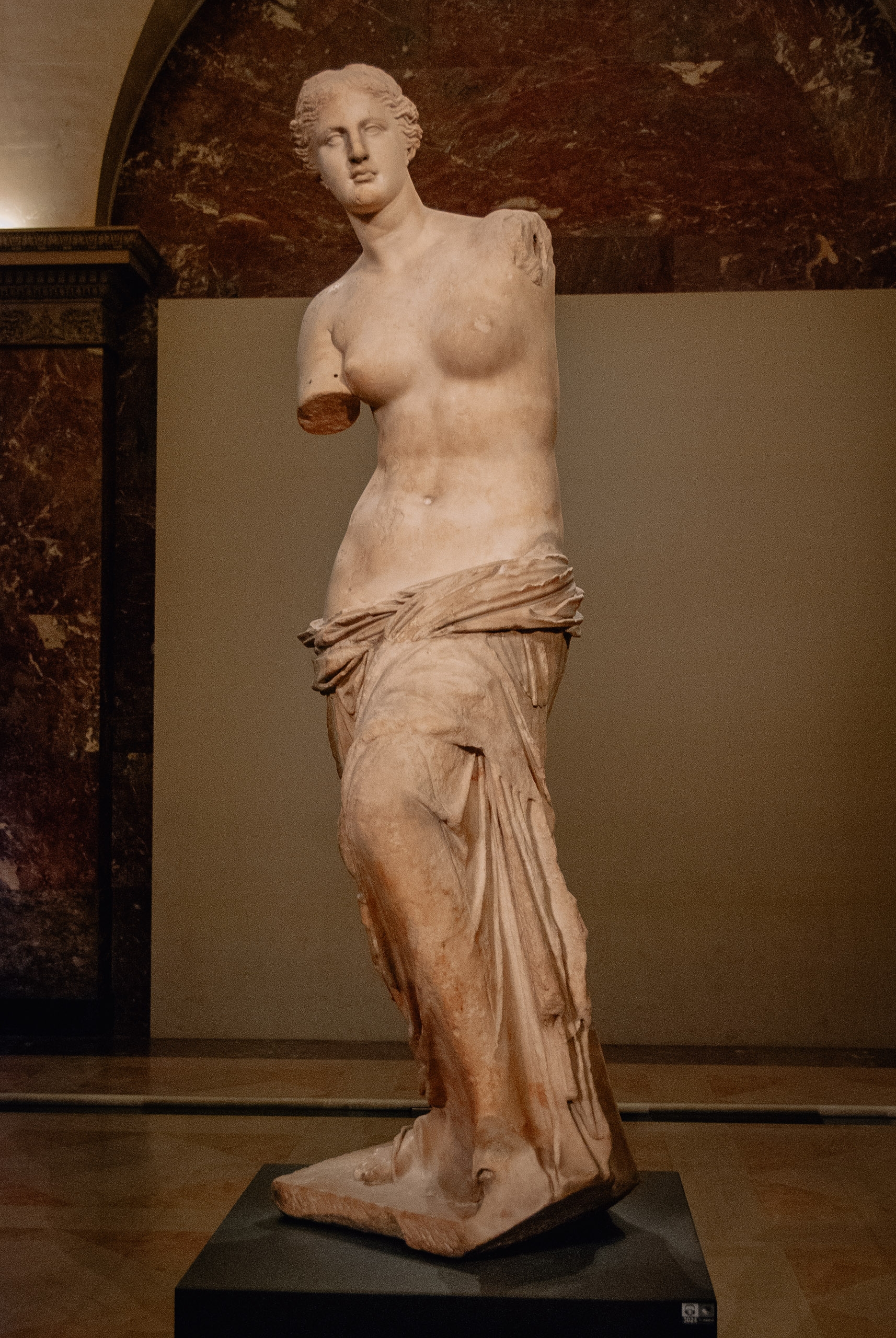 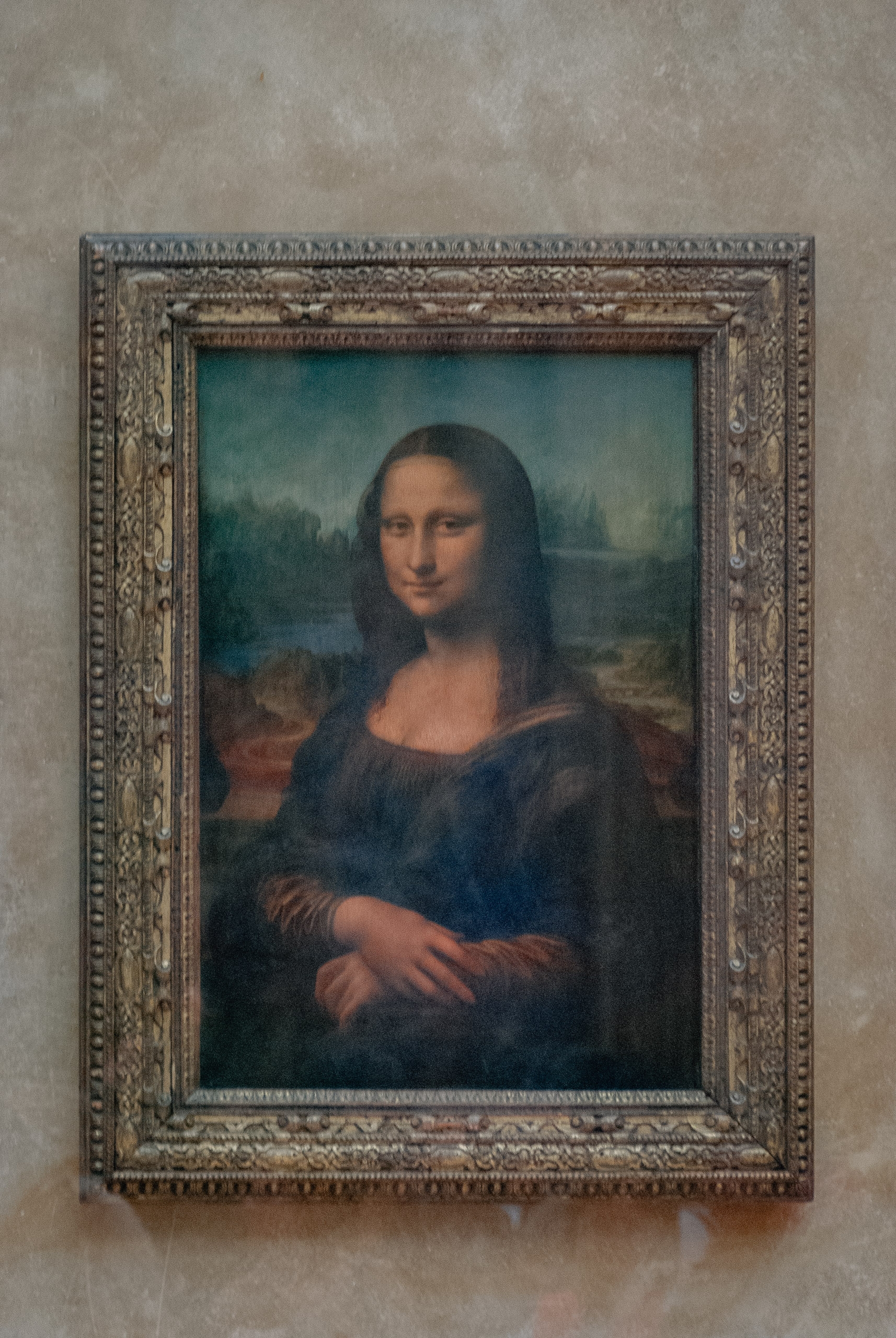 After the Louvre, we went to dinner at a highly recommended restaurant thought to have the City's best French Onion Soup. We both agreed that while the soup was good and different, it was not the best. The rest of the food was quite tasty and the dessert, La Vie en Rose (with little pigs made of pastry) was excellent. If you order your duck "pink", be prepared for duck sushi. This was our busiest day of power-touring yet. The following day was promising great weather so it was off to Versailles in the morning. 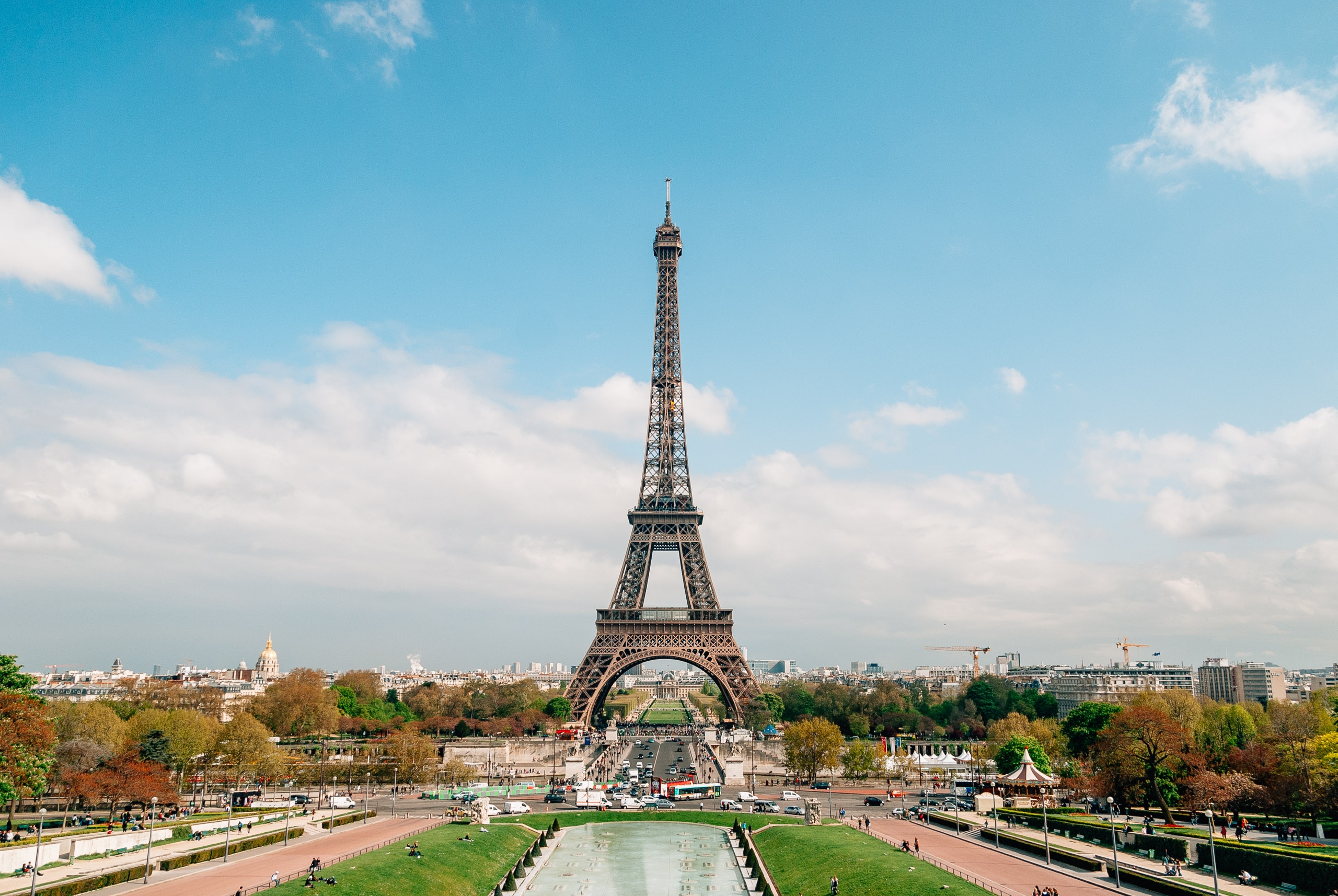 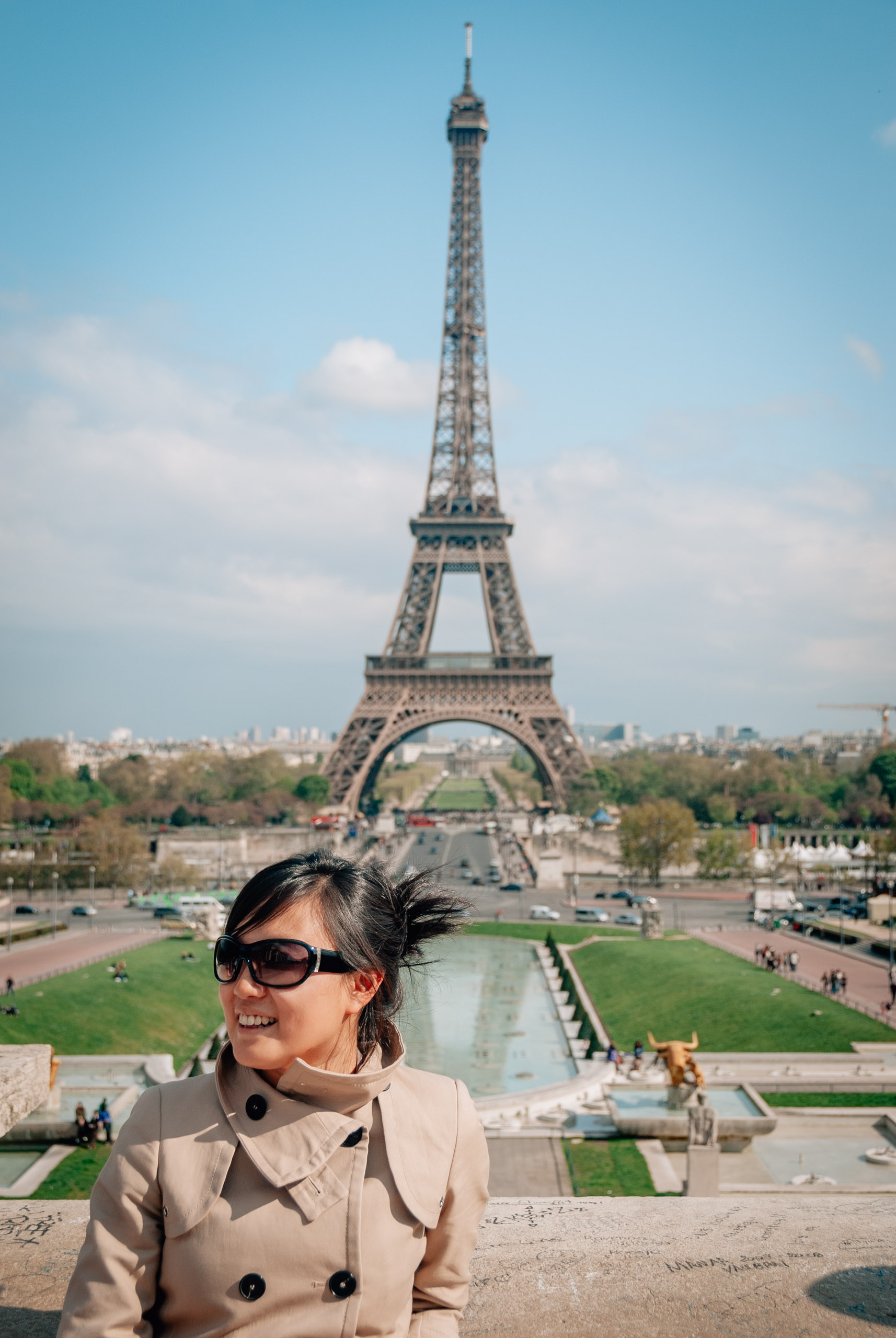