dark mode
Touring Paris - Day 5: Versailles & the Sacre-Coeur
May 08, 2008
Our last day in Paris was another busy one. In hindsight, we probably planned our visit to Paris about one day shorter than necessary. However, adding another day would likely result in us adding even more stuff to do and see. To be honest, when I booked the return train to London, I had the dates wrong in my head and had us returning to England a day earlier than necessary. Since the tickets weren't changeable or refundable, we decided to add a visit to Bath (UK) which turned out to be well worth it.

A visit to Versailles is a must for anyone seeing Paris, but it can be challenging. The RER train ride is short (about 30 minutes) and inexpensive, but the crowds in Versailles can be daunting. Obviously you should do the more popular attractions early, but this one requires a very early start. We watched the weather all week and since the sun came out the afternoon prior, we decided Thursday morning, with its clear forecast, was our best bet. We got up around 7:00 and headed down to the train station, stopping at Starbucks for a quick snack. As I wrote earlier, the Paris Museum Pass is terrific time and money saver, especially at Versailles; passholders can cut the line and enter the museum ahead of the crowds. 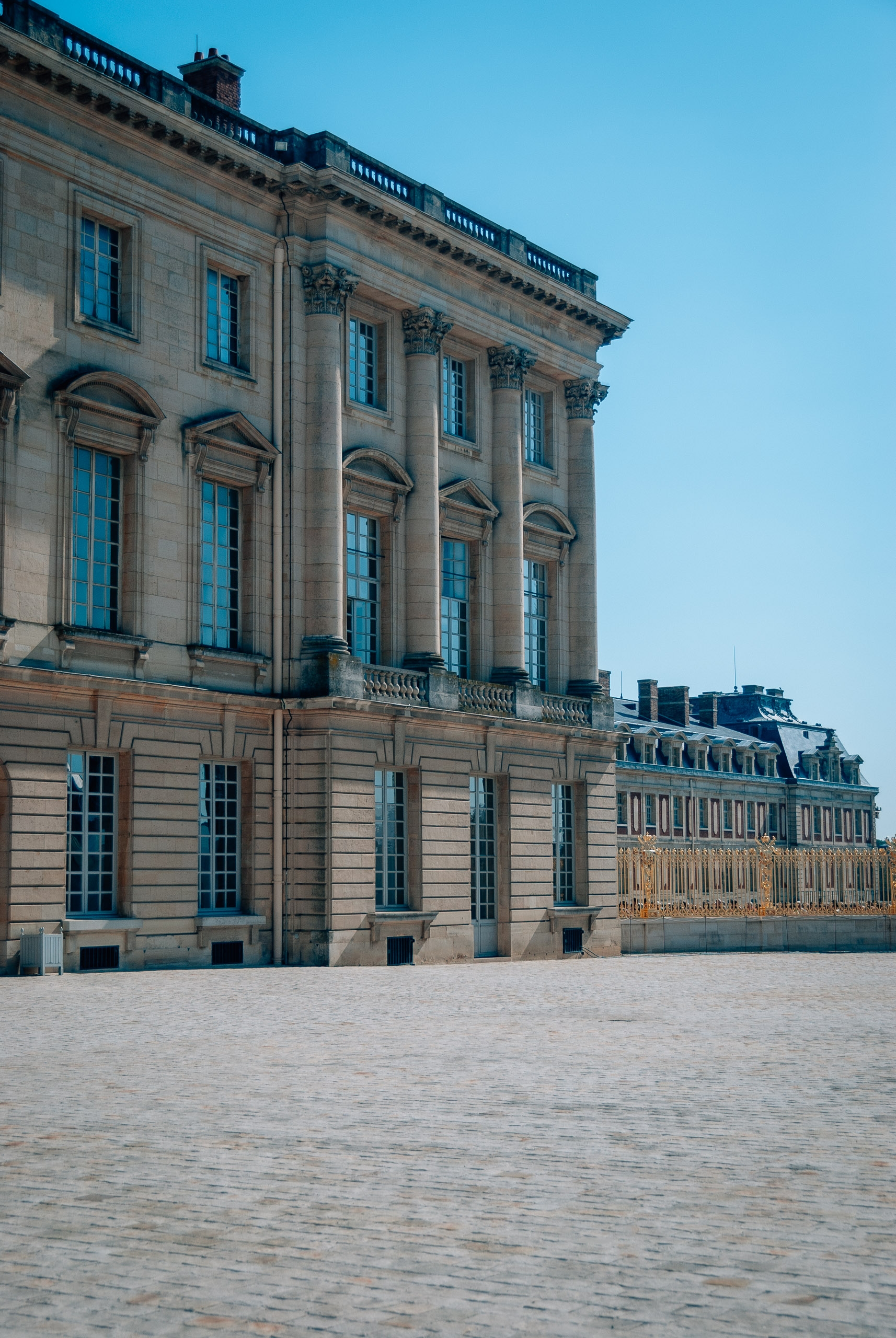 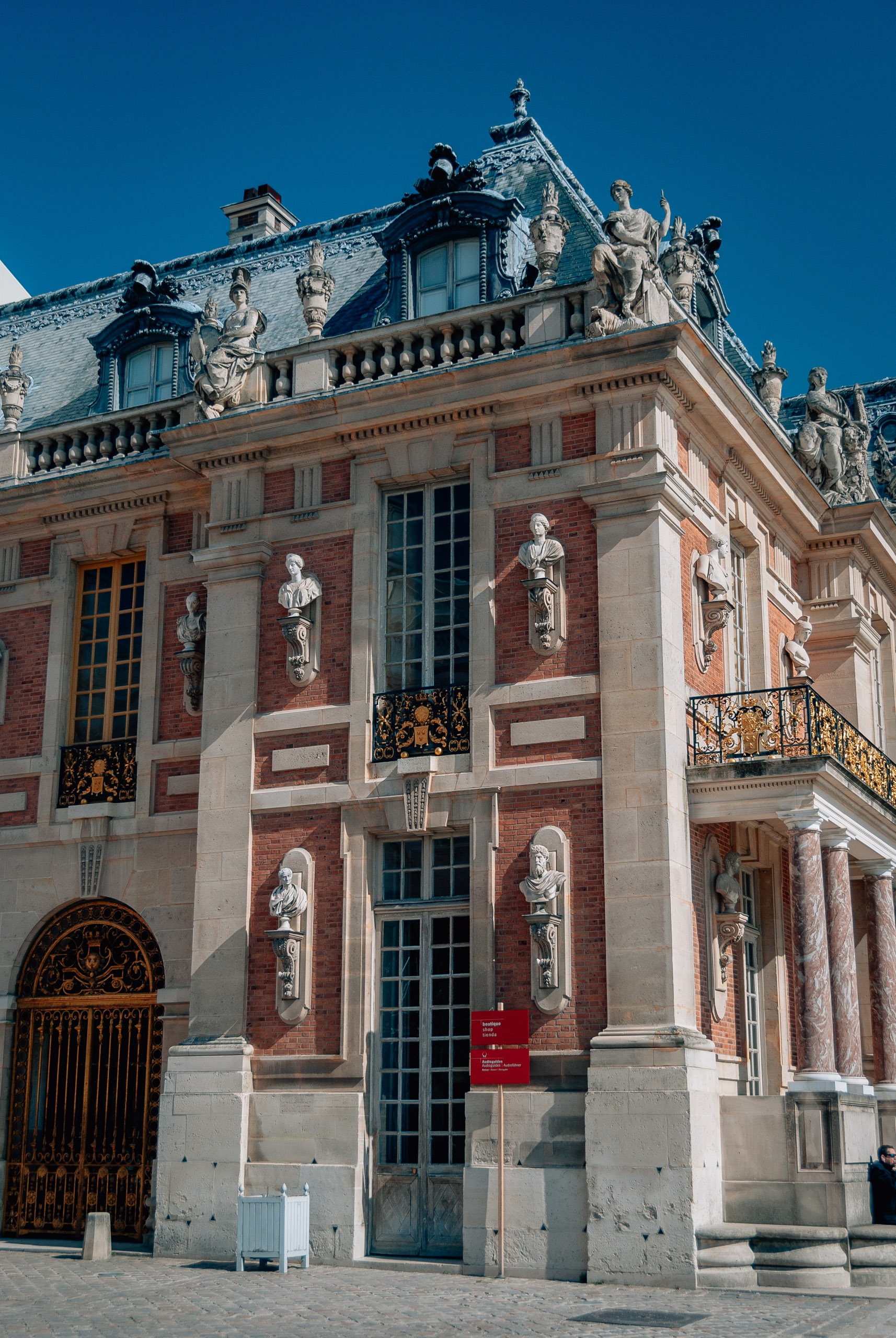 Versailles is about 17 miles from Paris proper, and was the seat of French Royalty for about 300 years until the French revolution in 1789. What started as a royal hunting lodge in the 1600's, the palace at Versailles was envisioned to be an opulent spectacle meant to impress French subjects and visitors, as well as a place for French royalty to consolidate their power by keeping lords and powerful subjects at arm's length. Over the years, the opulence of the palace grew at great expense; impressing foreign visitors while insulting locals living hand to mouth under heavy taxes tough economic times. The last royal occupants were King Louis XVI and Marie Antoinette, later famously beheaded following the French revolution. 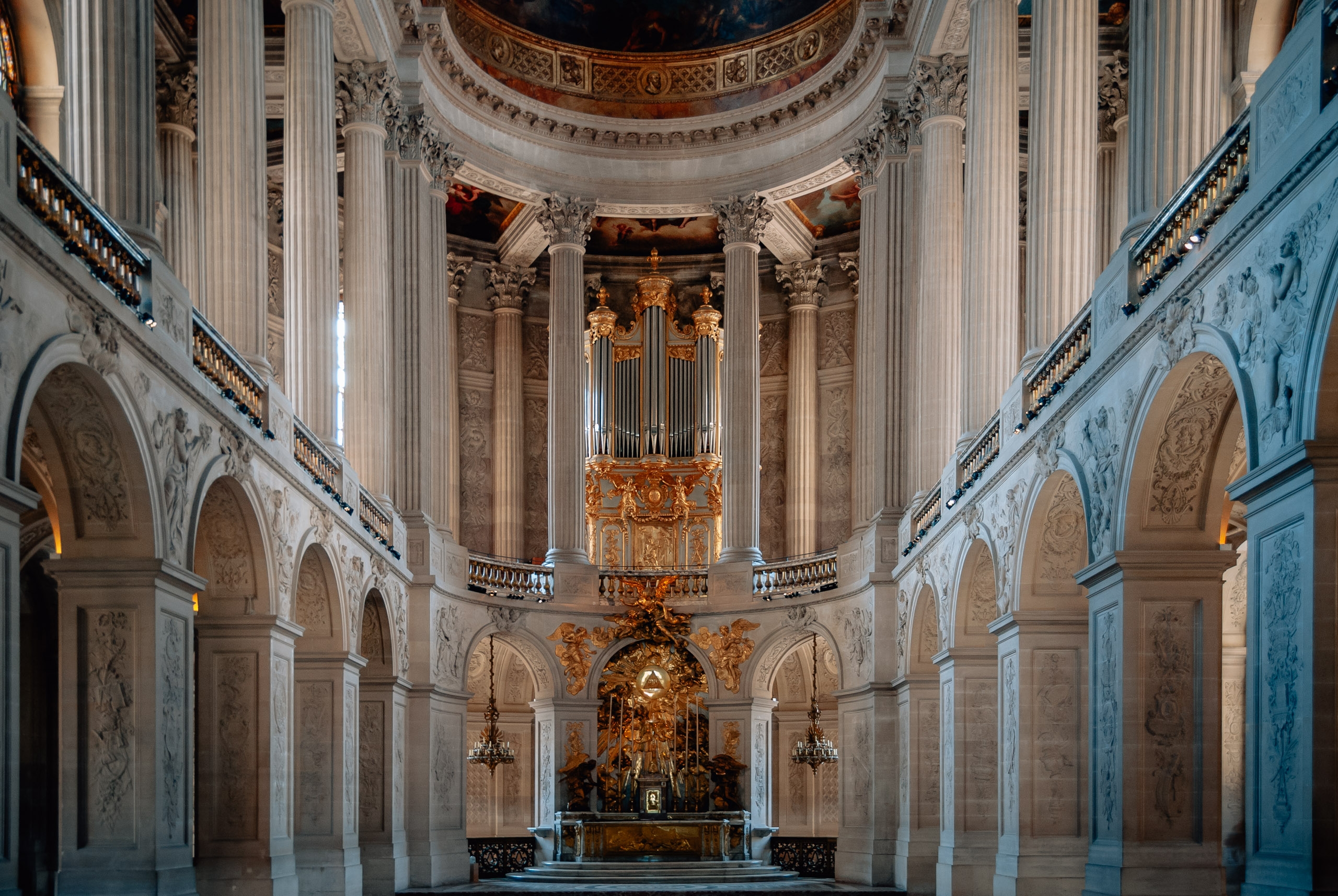 The grand interior of the Chapel

That the palace survived is remarkable considering the resentment it fostered, but steps were taken quickly following the Revolution to preserve the palace as a national treasure and museum. Today the French government is undergoing a $400M renovation over the next 15 years. The front facade was under scaffolding, but the interior rooms were all but completely restored. One room of interesting note was the Hall of Mirrors. High quality reflecting mirrors were rare and expensive, and it was not uncommon for people to live their entire lives without a good look at their own face aside from what they had seen in often overly-flattering portraits. To impress visitors, one of the palace's largest ballrooms was paneled floor to ceiling in large, glass-on-silver mirrors at enormous expense. Visitors would sit in a chair and be paraded by these mirrors to get a good look at their own reflection. I would imagine there were some heartbreaking moments when getting a true look at their own faces for the first time. 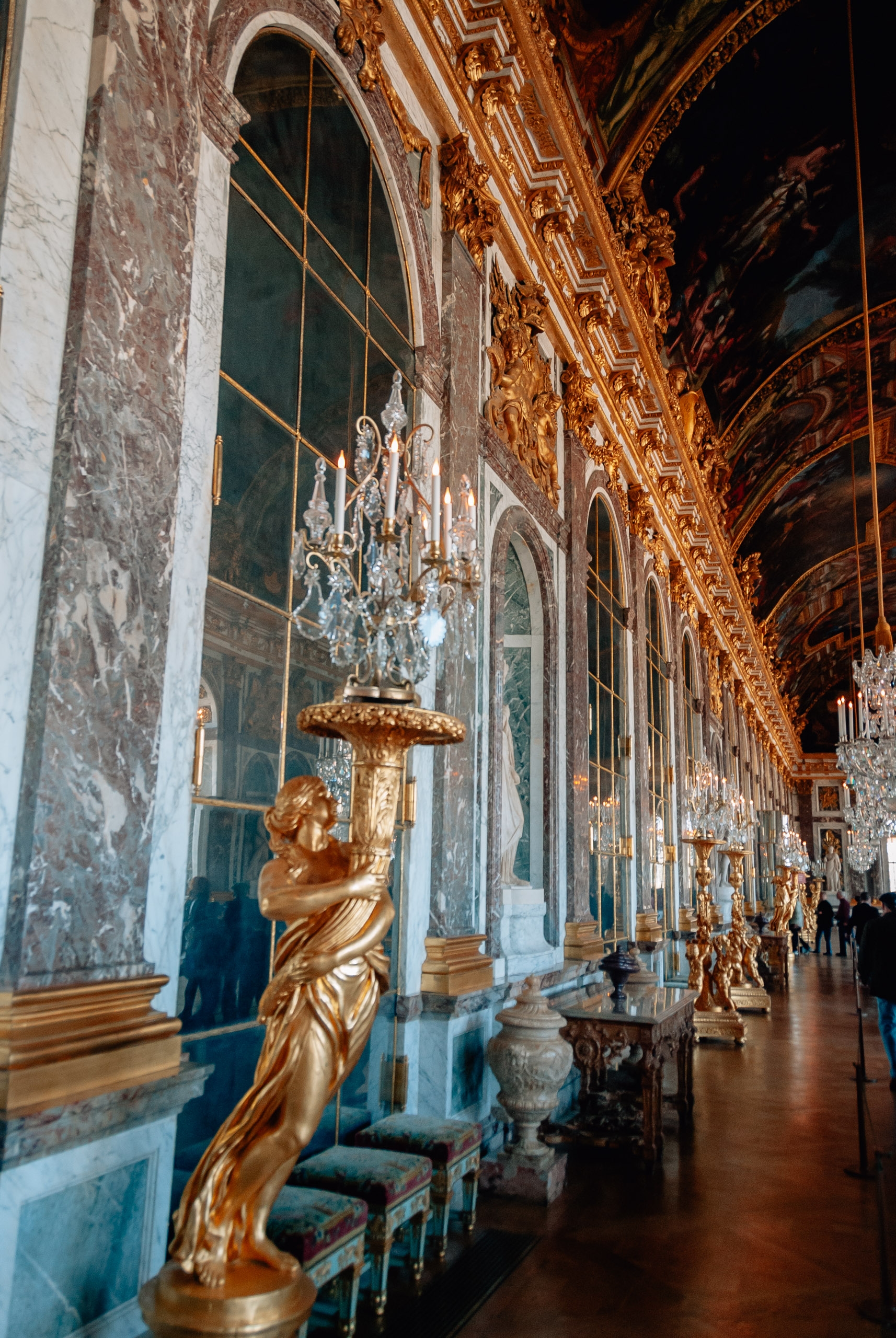 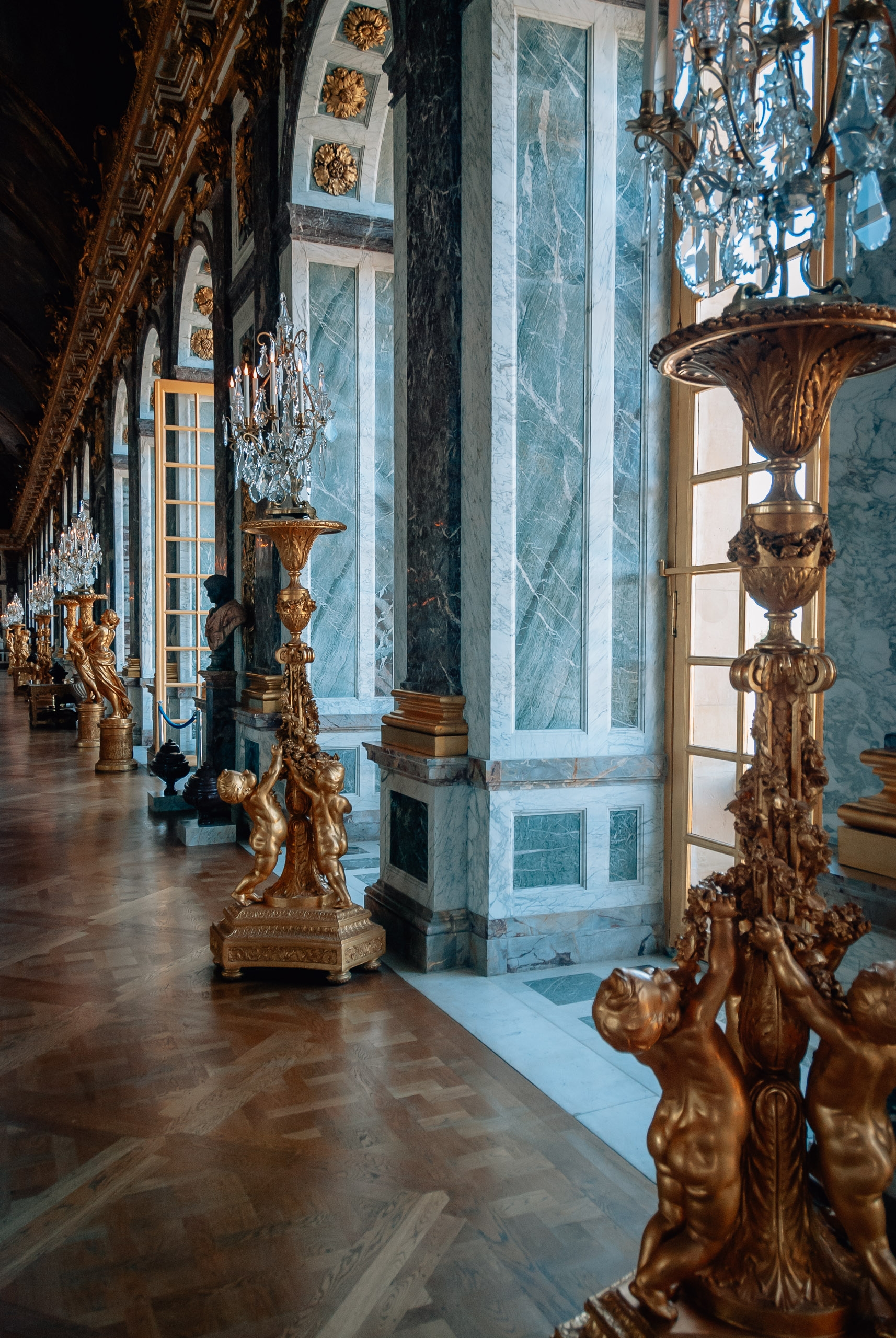 Inside the Hall of Mirrors

Throngs of visitors pack the rooms, each depicting the life of royalty during the 1700's. Even more impressive, in my opinion, are the vast gardens that extend for miles down a graceful hill from the back of the chateau. Grab a picnic and take a long stroll out to the outer buildings and enjoy the park on a nice day. We were fortunate that it was sunny and about 65 degrees. 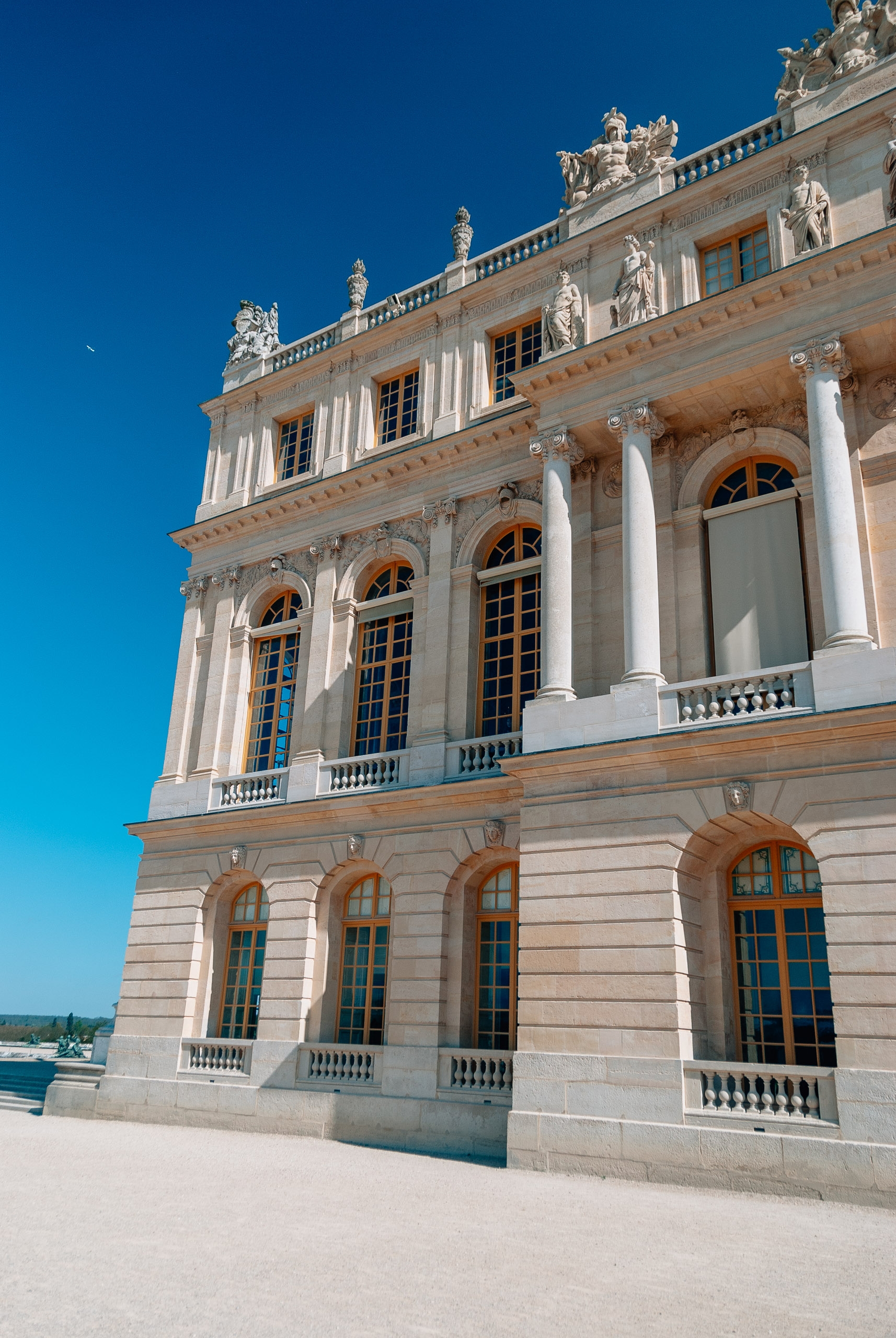 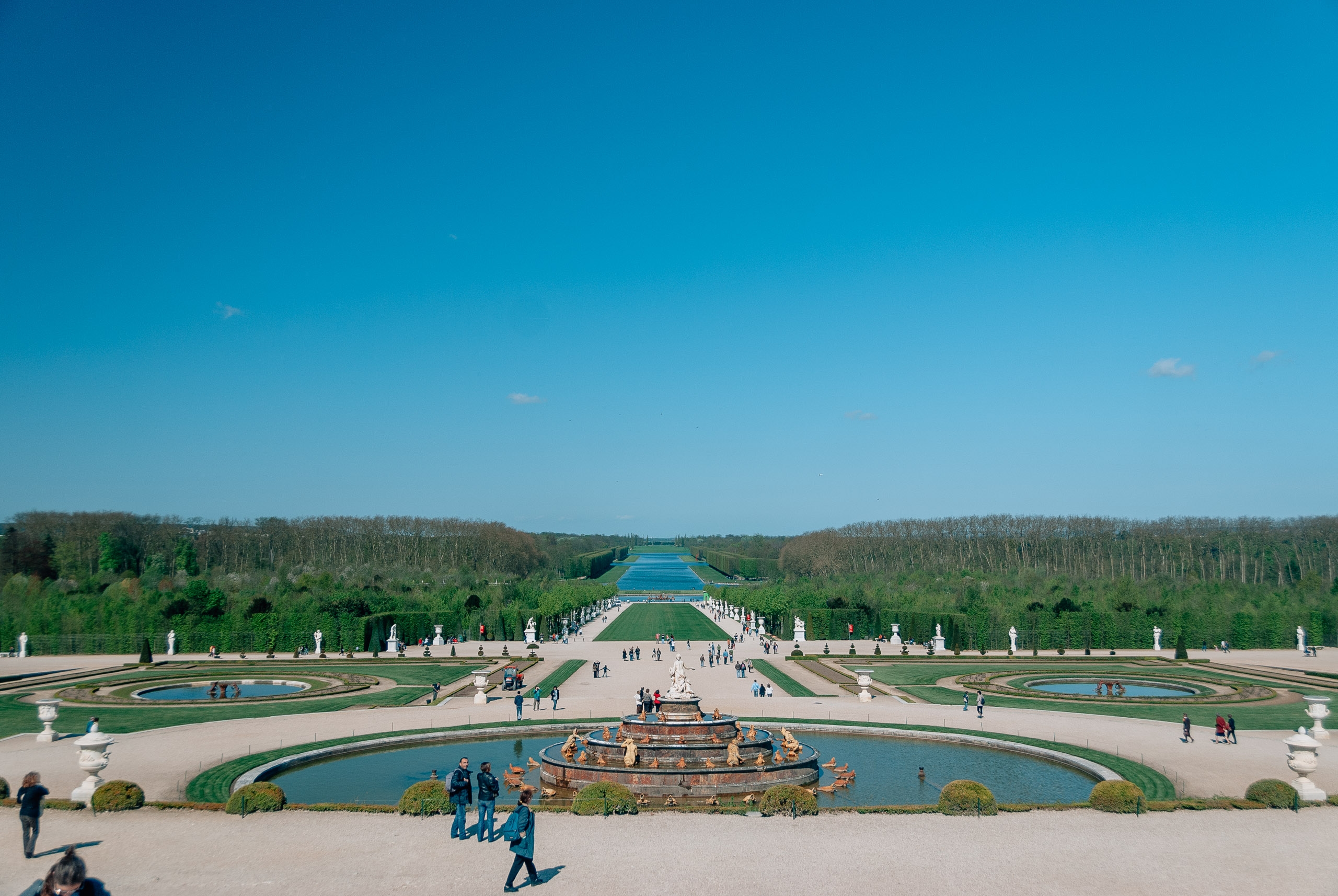 A view of the gardens

We took a walk down through the gardens toward some of the outer buildings on the palace property, the Grand Trianon, the Petite Trianon and the "cottage" (4000 square feet) built by Marie Antoinette to escape the stuffy formality of the main palace and to entertain her many male visitors. The cottage was closed for renovations, but the surrounding gardens were quite nice to see. 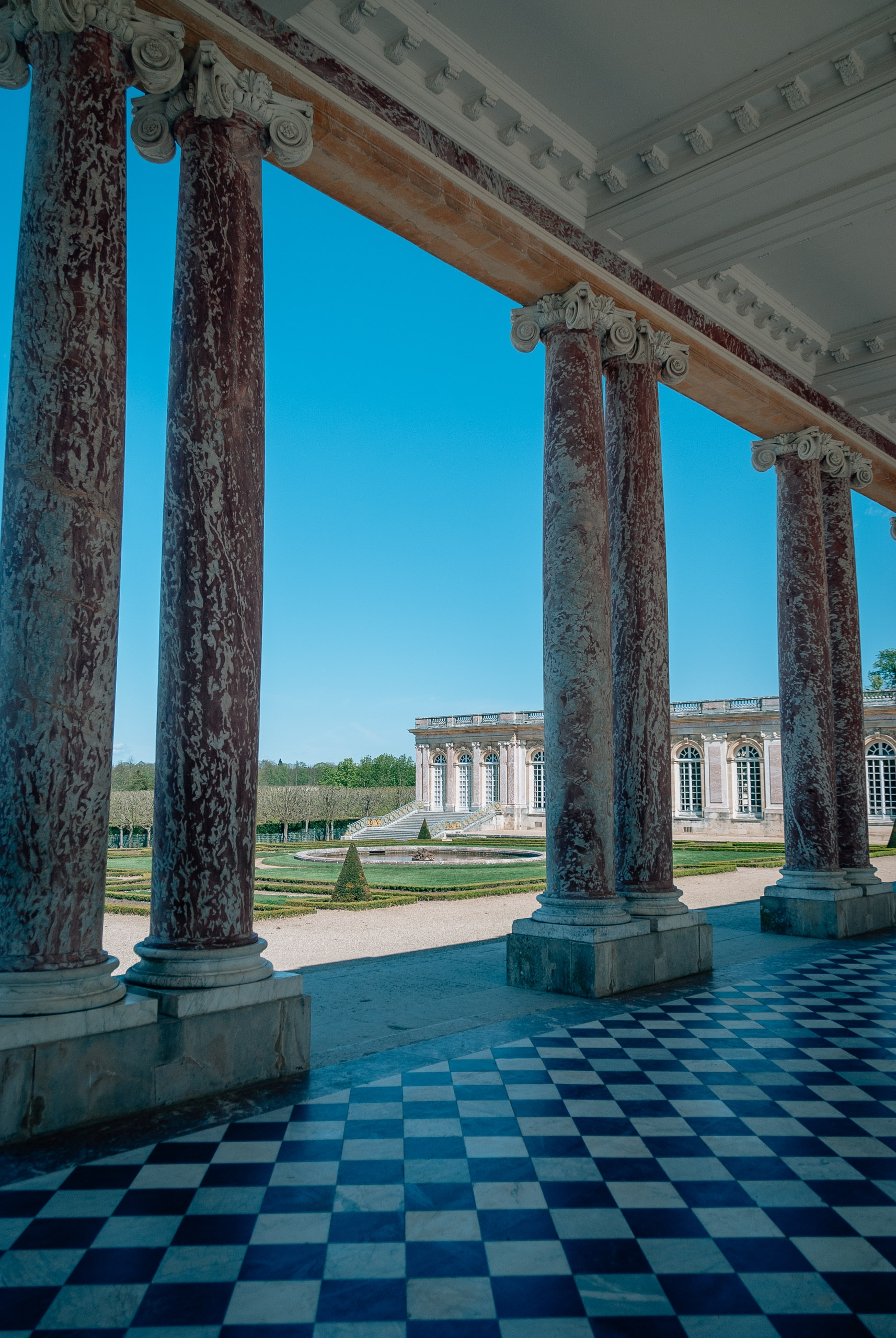 Outside the Grand Trianon 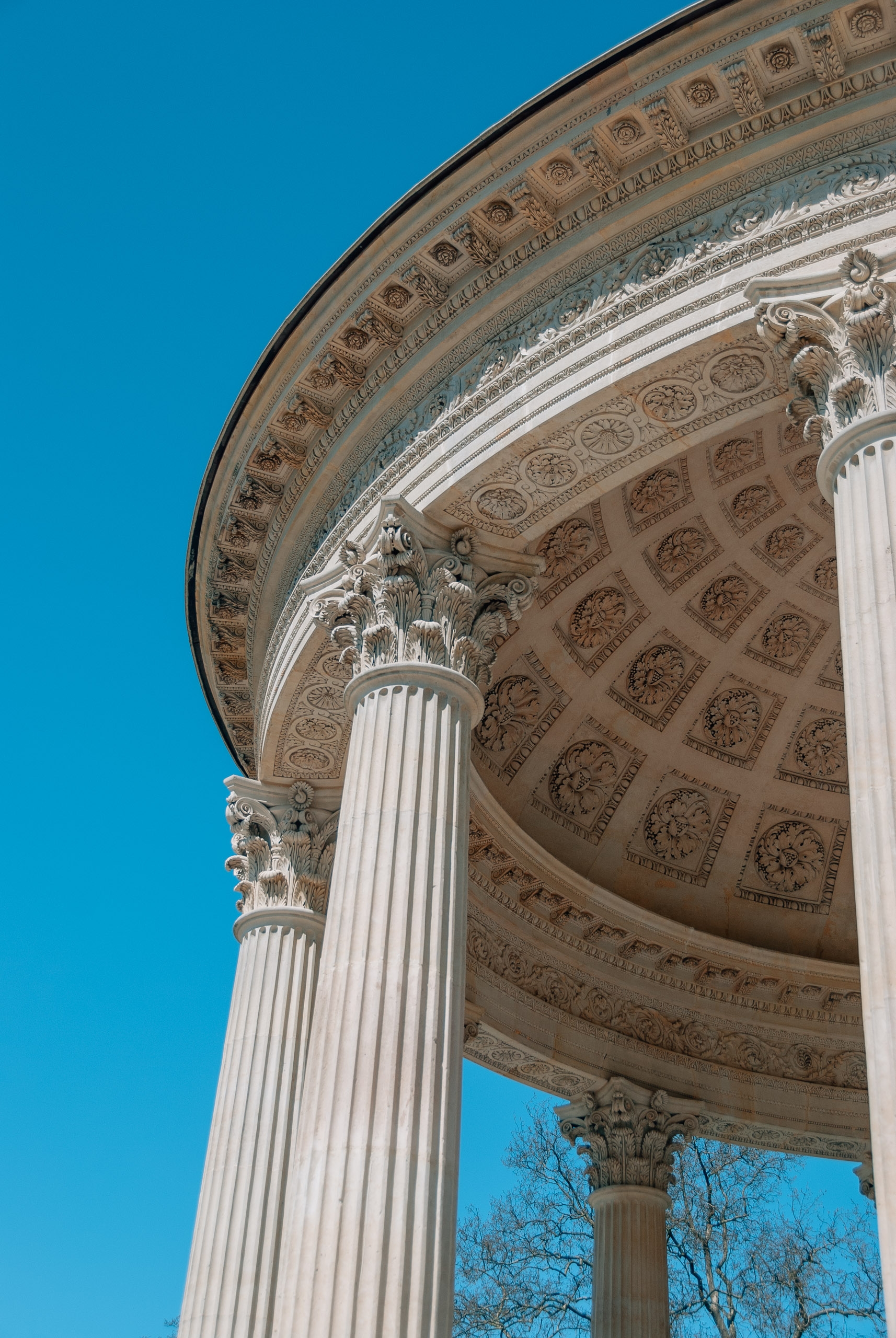 In the cottage gardens

We headed back to the palace along the main reflecting pond, stopping for a picnic lunch of sandwiches and beer. The fountains and statuary around the gardens are amazing to see. In the gardens you can rent bikes, ride horseback or even hire a golf cart that blasts classical music whenever the cart is in motion. If you hear Brahms coming up behind you, step aside. 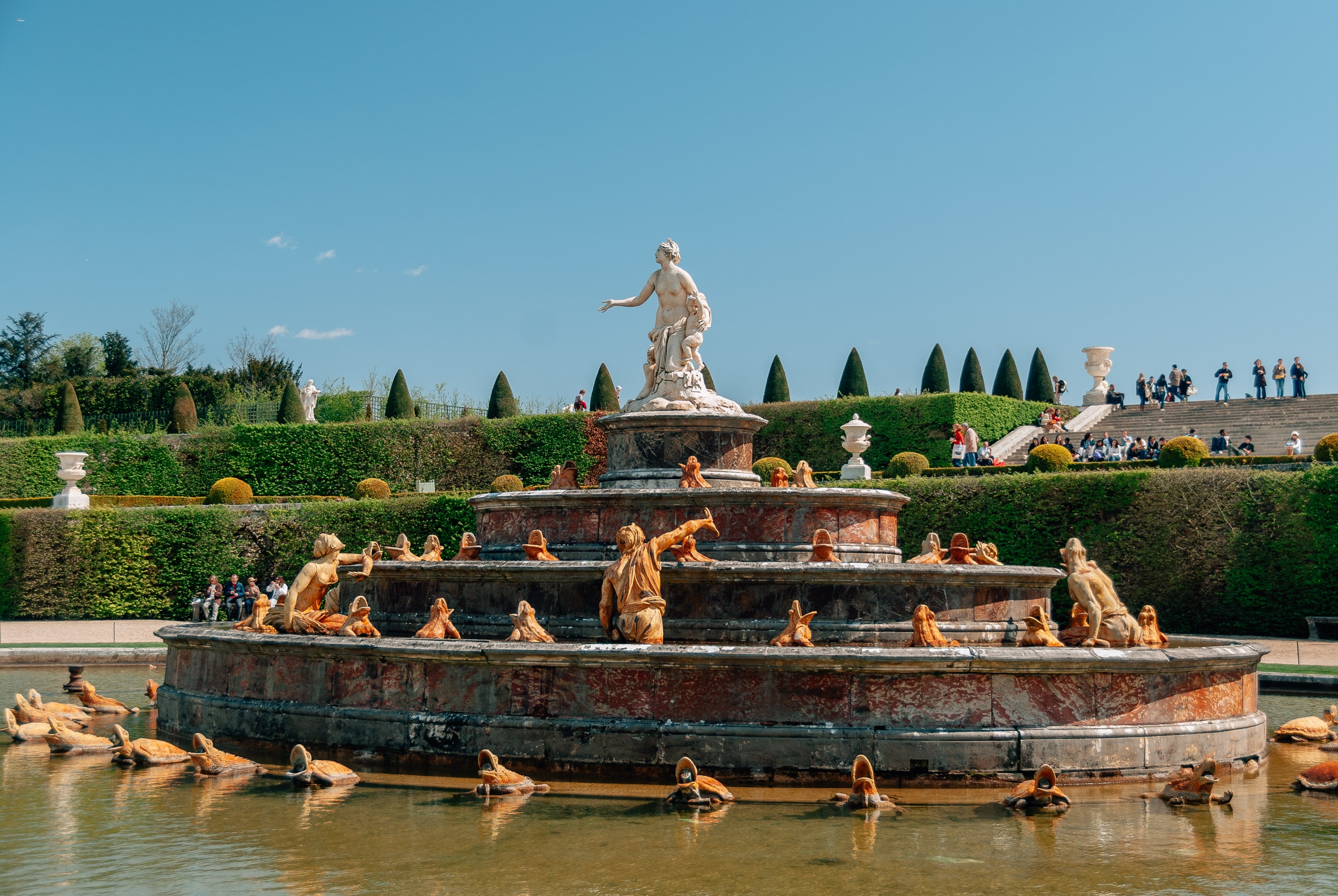 The main fountain in the Versailles Gardens

By the time we neared the palace on our way back to the train, the crowds were growing immense. The line to enter was at least an hour and wound around the block. I'm glad we got there early and had our passes because waiting in that line in the sun looked like no fun at all. The walk back to the train was an easy 10 minutes and we headed back into Paris. 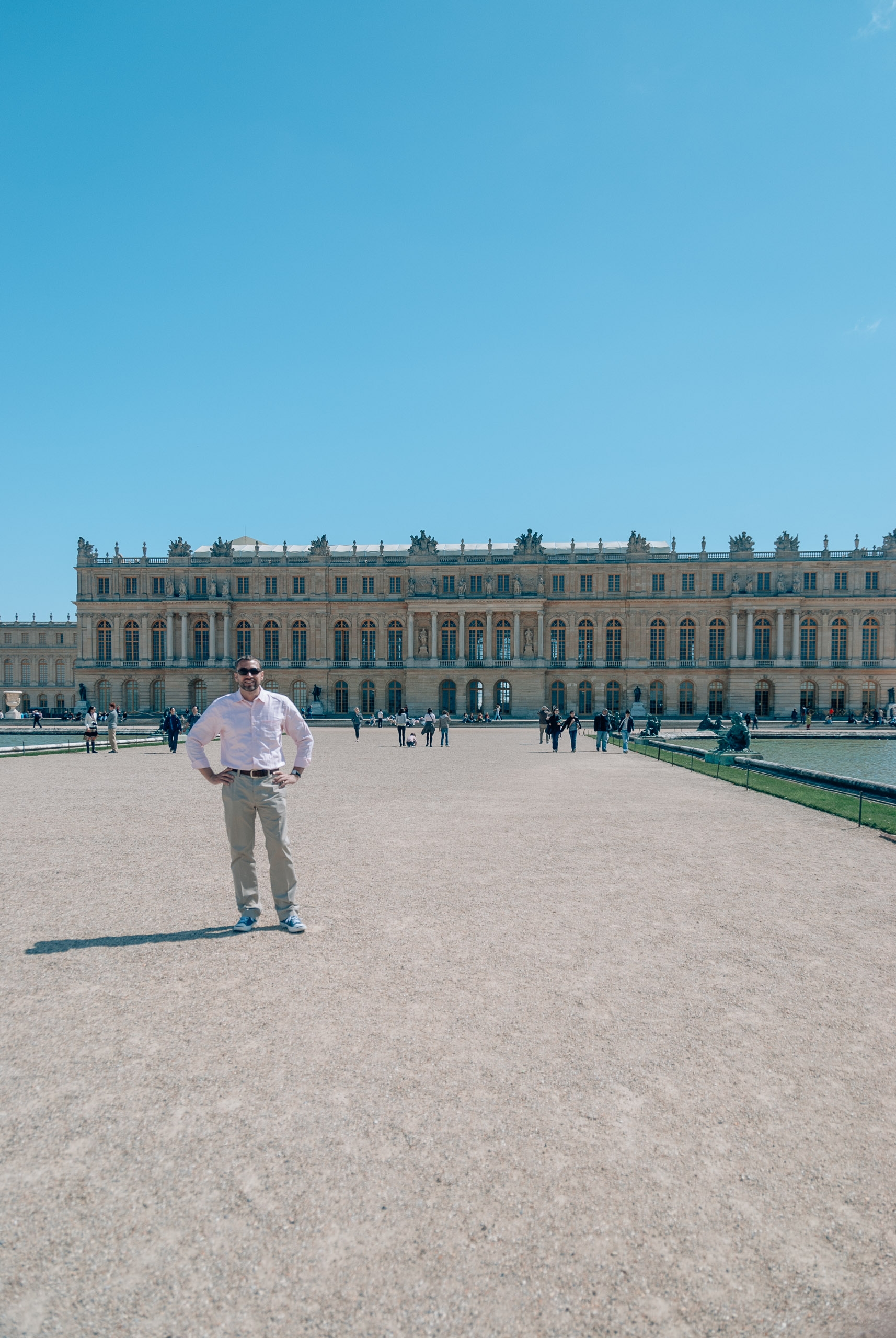 Me (wearing khakis) at the back of the chateau

We arrived back in Paris about 30 minutes later and got off the RER around the Eiffel Tower to take a boat tour along the River Seine. It was a nice and relaxing hour and a great way to see the city and hear some "interesting" tidbits of information. The tour was being done in 6 languages so all of those announcements grew a bit tiresome, but it was fun to kickback and enjoy the remainder of the nice weather, which was slowly turning cloudy and cool. 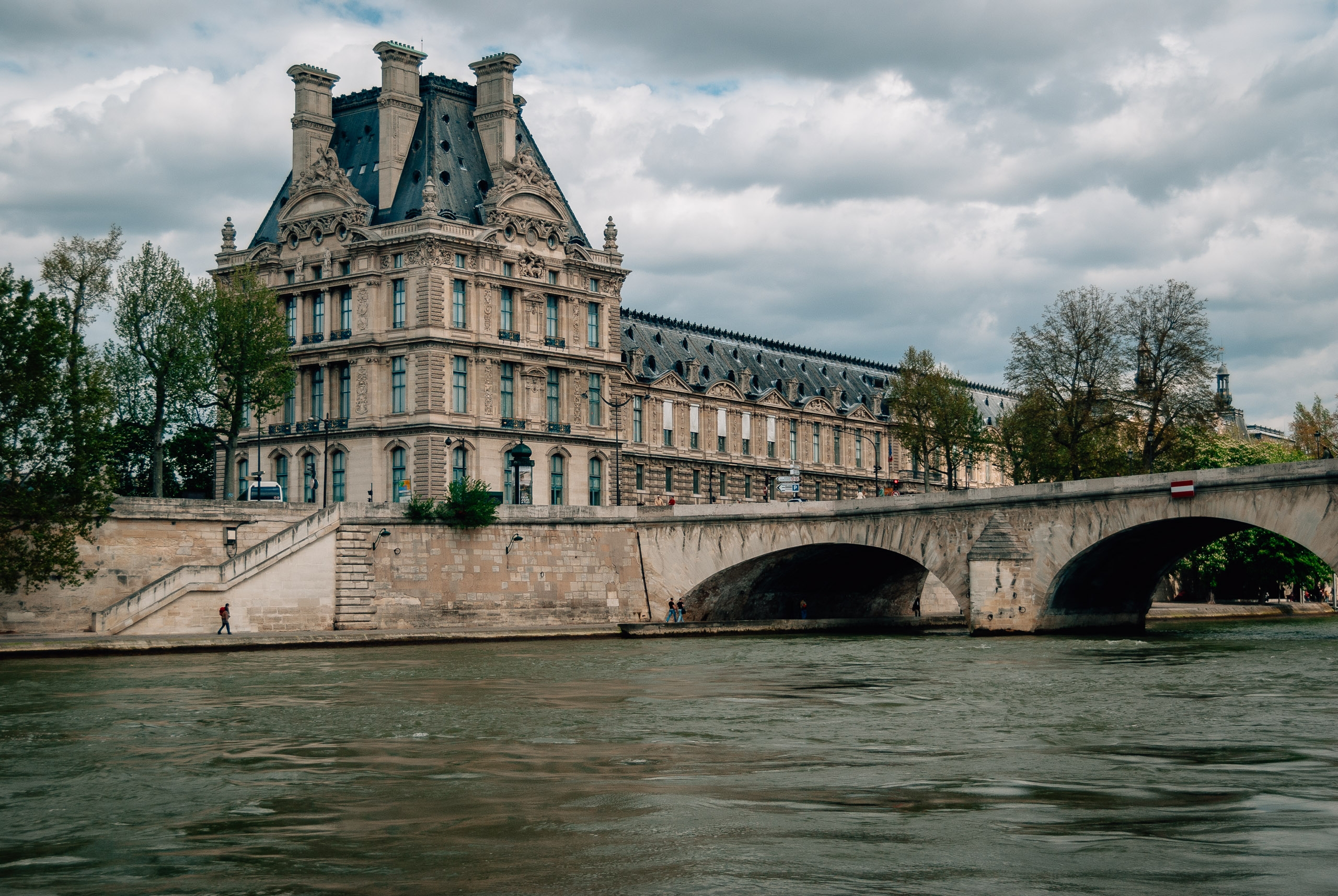 Outside the Louvre from the River Seine

After our boat tour, our next stop was Montmarte to visit the Sacre Couer (see photo at the bottom) and see a bit of that neighborhood. Montmarte is famous as the seedy birthplace of the bohemian revolution, and home to the Moulin Rouge. It lives down to its reputation, the lower-east-side equivalent of Paris, full of pickpockets and hooligans. Its a little less comfortable than other parts of town, and the Moulin Rouge, though famous, is sort of a dump. We went to the Basilica and to take in the views of Paris, but didn't stay long. 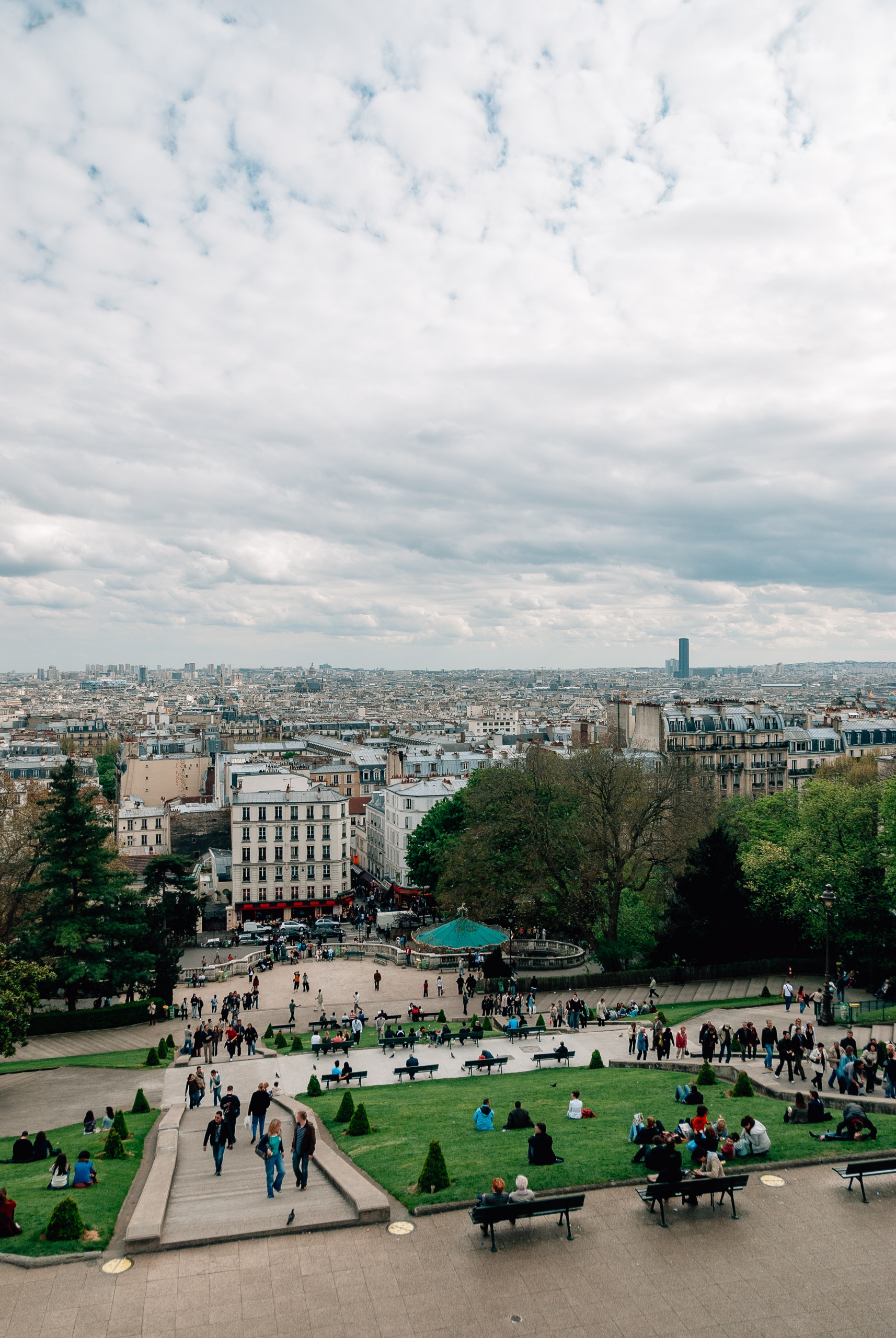 The view of Paris from the steps of the Sacre Couer

Our last and final stop of the day was a visit to the Bar Hemingway at the Ritz Hotel. Cesar Ritz started the luxury hotel business by building three original Ritz hotels; one in London, one in Madrid and the most famous in Paris. Ernest Hemingway used to hangout and write in one of the hotels three bars, which has now been restored to what it looked like then and houses some interesting Hemingway memorabilia. Drinks start at 28 Euro, so we didn't stay for too many rounds. In fact, the Bar Hemingway is home to the Guinness Book of Records' most expensive cocktail, the Hemingway Sidecar which goes for about $334. I don't know why, and we didn't order one to find out.

This was our last day in Paris before heading back to the UK the next day. I've been to Paris 3 times now and really love it more each time I visit. I hope to be back this Fall on my way to a wedding in Spain, and I can easily see this becoming an annual visit. Having done nearly all the tourist attractions at this point, I'm looking forward to relaxing more and concentrating more on local pursuits such as good food, good wine and whole lot of sitting around. 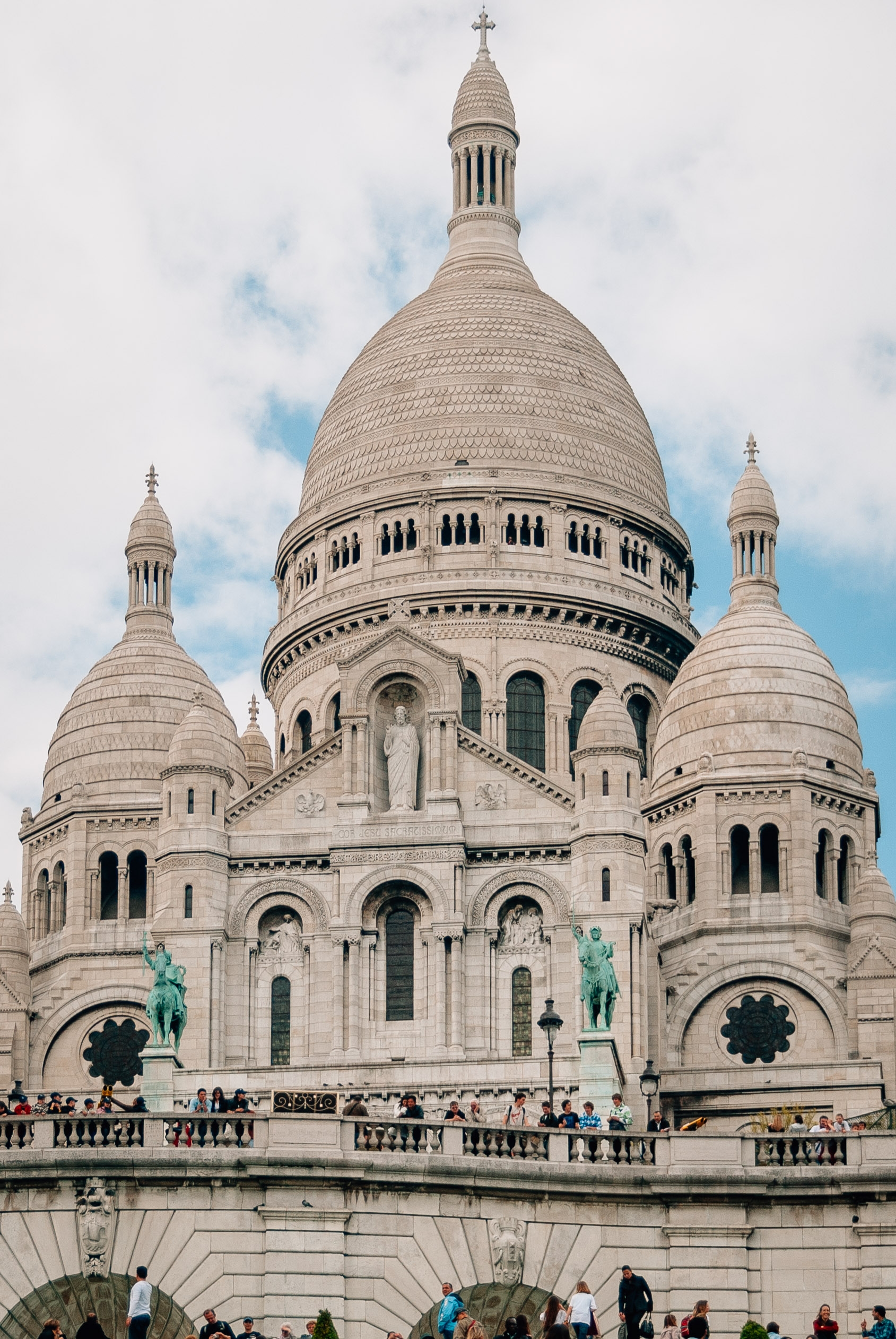