dark mode
Touring Barceolona - Gaudi, La Sagrada Familia and Tapas!
September 01, 2008
Day 3 in Barcelona was spent doing more sightseeing, though planned to be not as strenuous nor treacherous as previous days.  We hadn't planned a Gaudi day, but it sort of worked out that way. 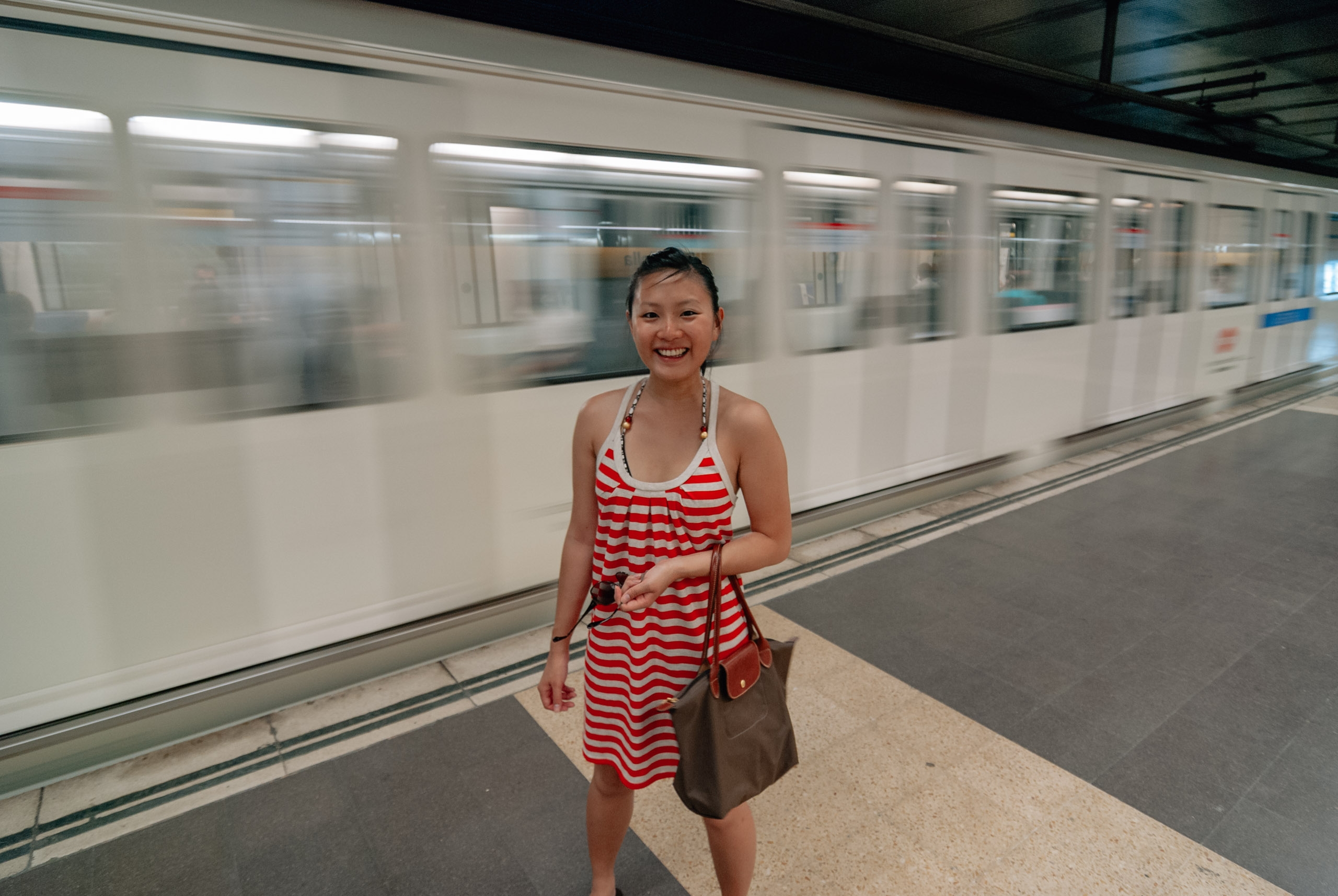 Antoni Gaudi is one of Barcelona's most famous sons, a renowned architect whose works in the naturalist style can be found all over the city.  Naturalist architecture is very organic in appearance, and has at times a somewhat creepy look.  Columns are skeletal in shape, and the turrets, windows and doorways resemble skulls.  Gaudi's most famous work is the temple of the Sagrada Familia, an enormous Gothic cathedral in the center of the City. 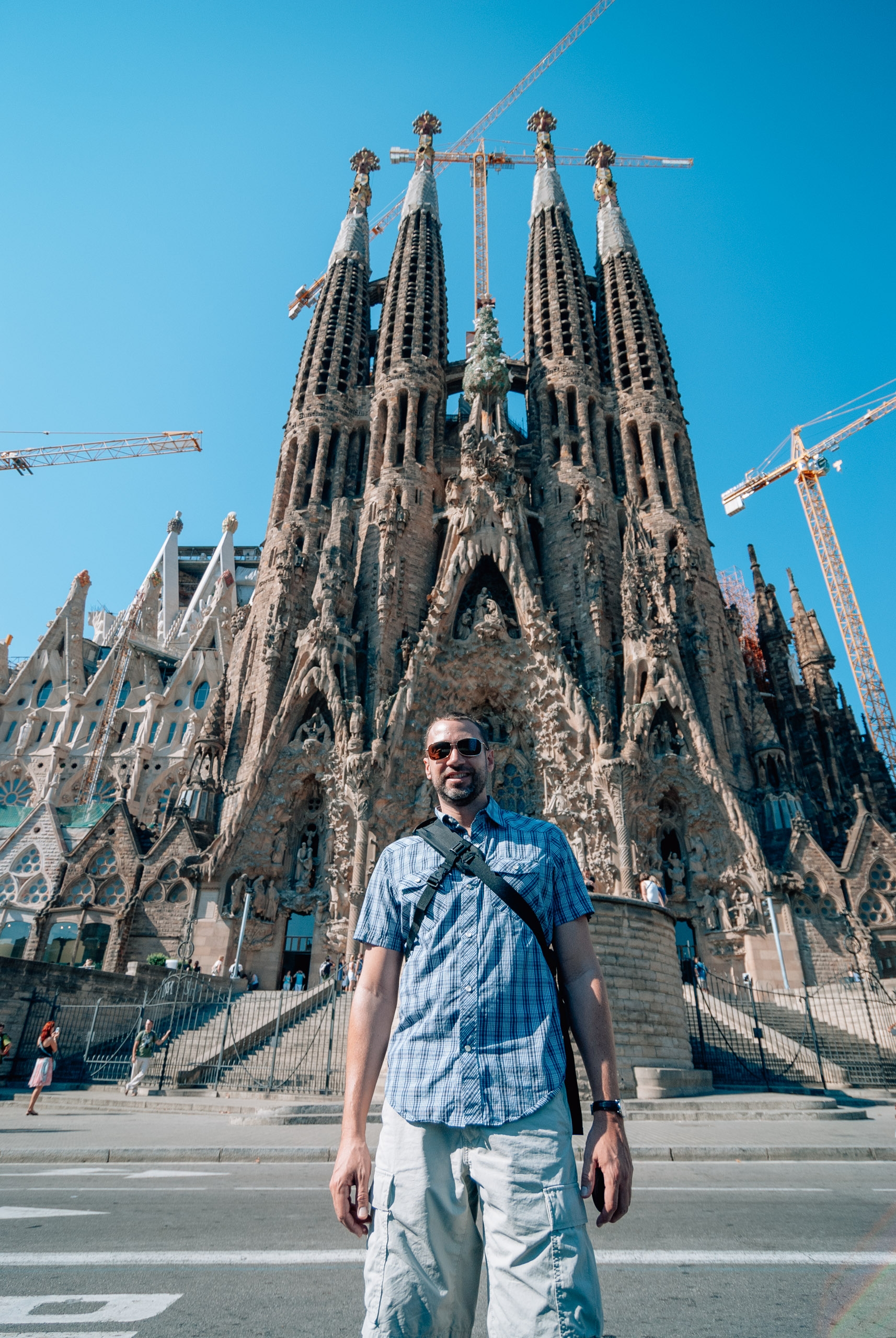 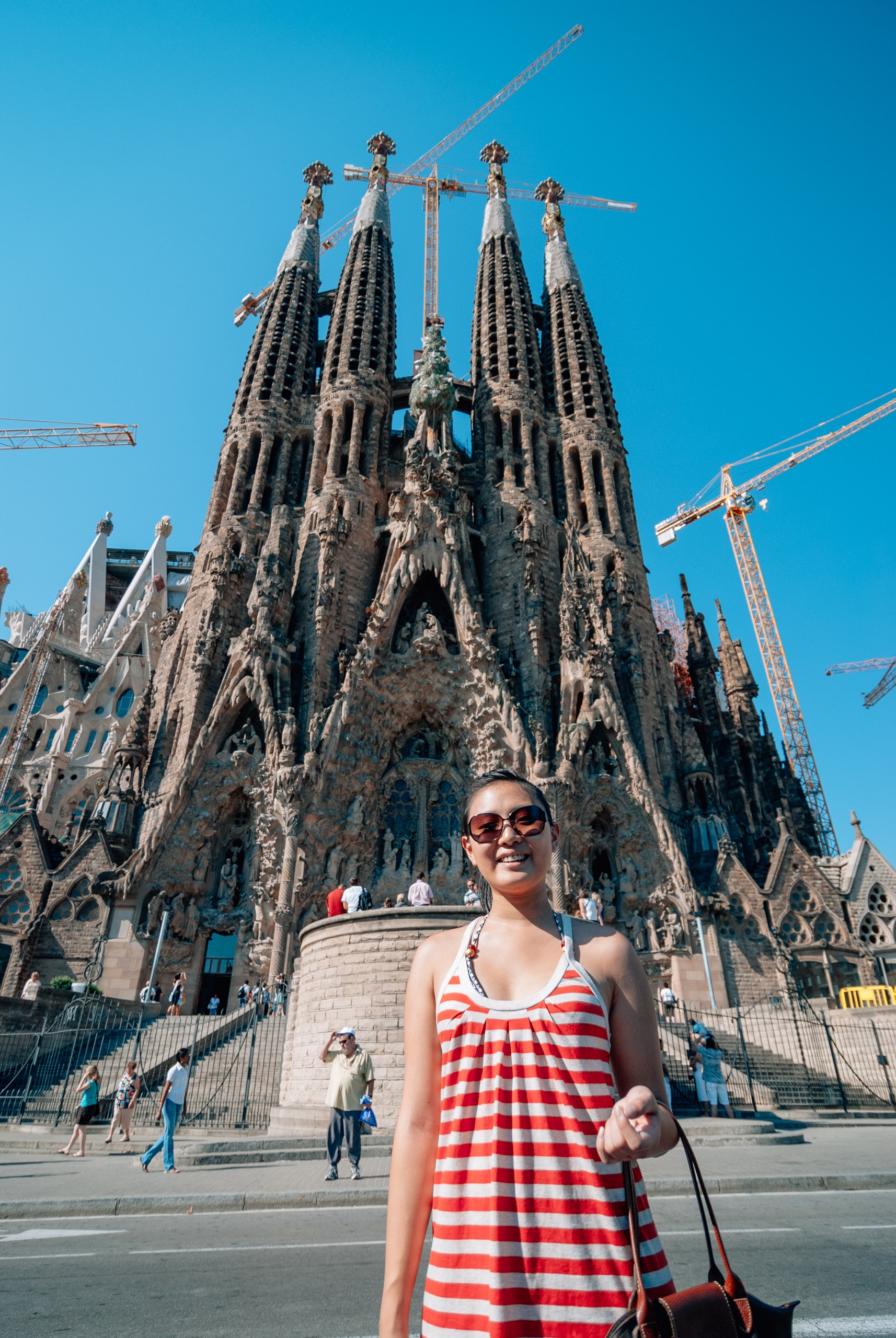 Outside the Sagrada Familia

Construction on the Sagrada Familia began in 1882, based on Gaudi's models yet most of the vision of this structure was in his head.  Given his penchant for hallucinogenic drugs, this was a risky approach to his work.  The cathedral was to be built with funds sourced entirely from donations and alms. Given the source of financing and the lack of detailed architectural plans, work progressed slowly.  Gaudi was killed in 1926 after being struck by a street car.  His untimely death left the future of the project uncertain, yet work progressed based entirely on his models (many of which were incomplete), sketches and even conversations he had with other architects.  Others were brought in to design parts of the church that were completely unknown, and this has led to some controversial choices on the construction of one facade, who's cubist design is in stark contrast to the rest of the church and Gaudi's vision. 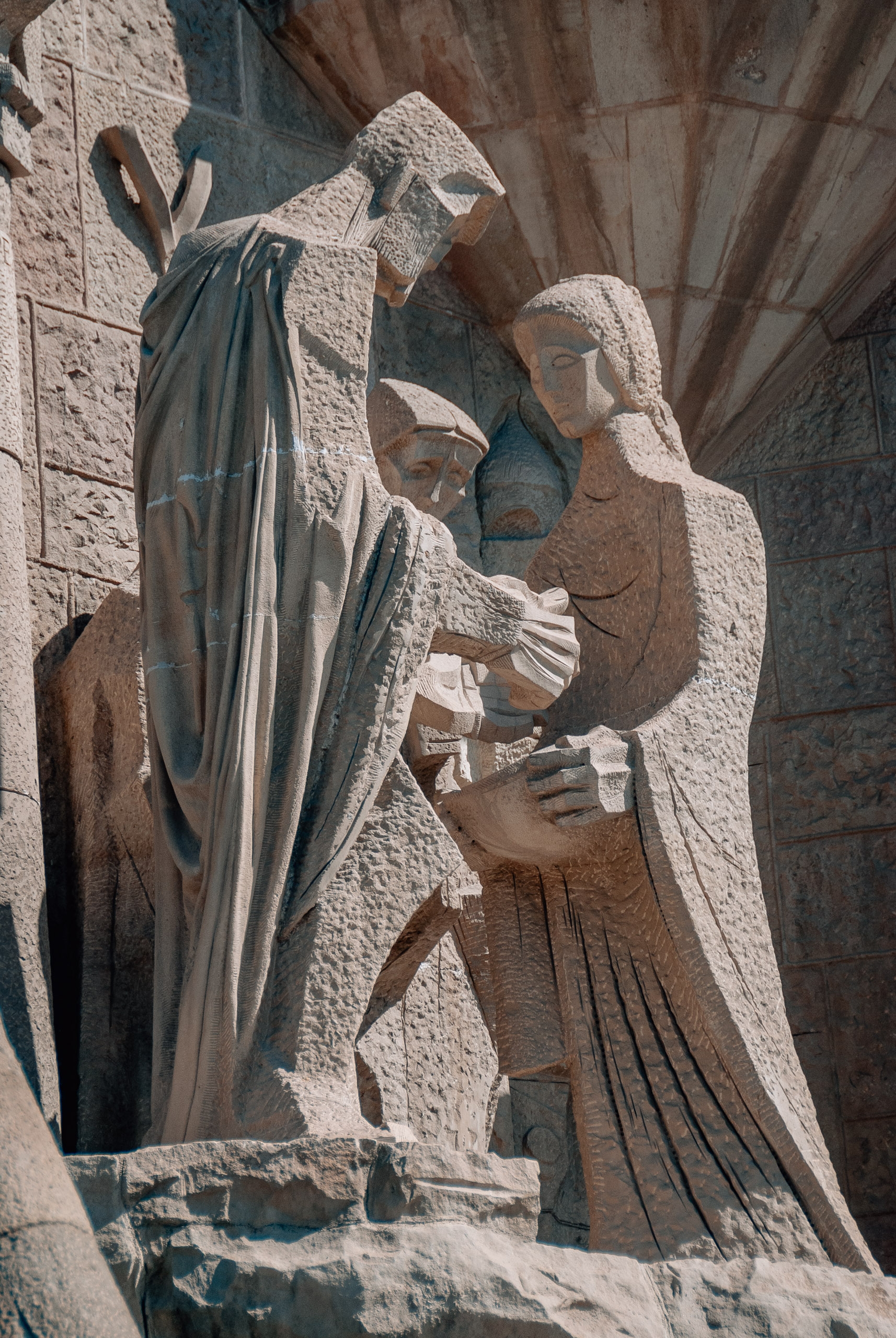 We took the subway (fast, clean and efficient) from our hotel to the church.  We stopped at McDonald's so Jessica could once again sample the McNuggets here and compare them to the rest of the world.  They passed, as did the fries and the Big Mac.  Its also notable that one of the least expensive items on the beverage menu is beer, which at 11:00AM goes well with your burger and fries. 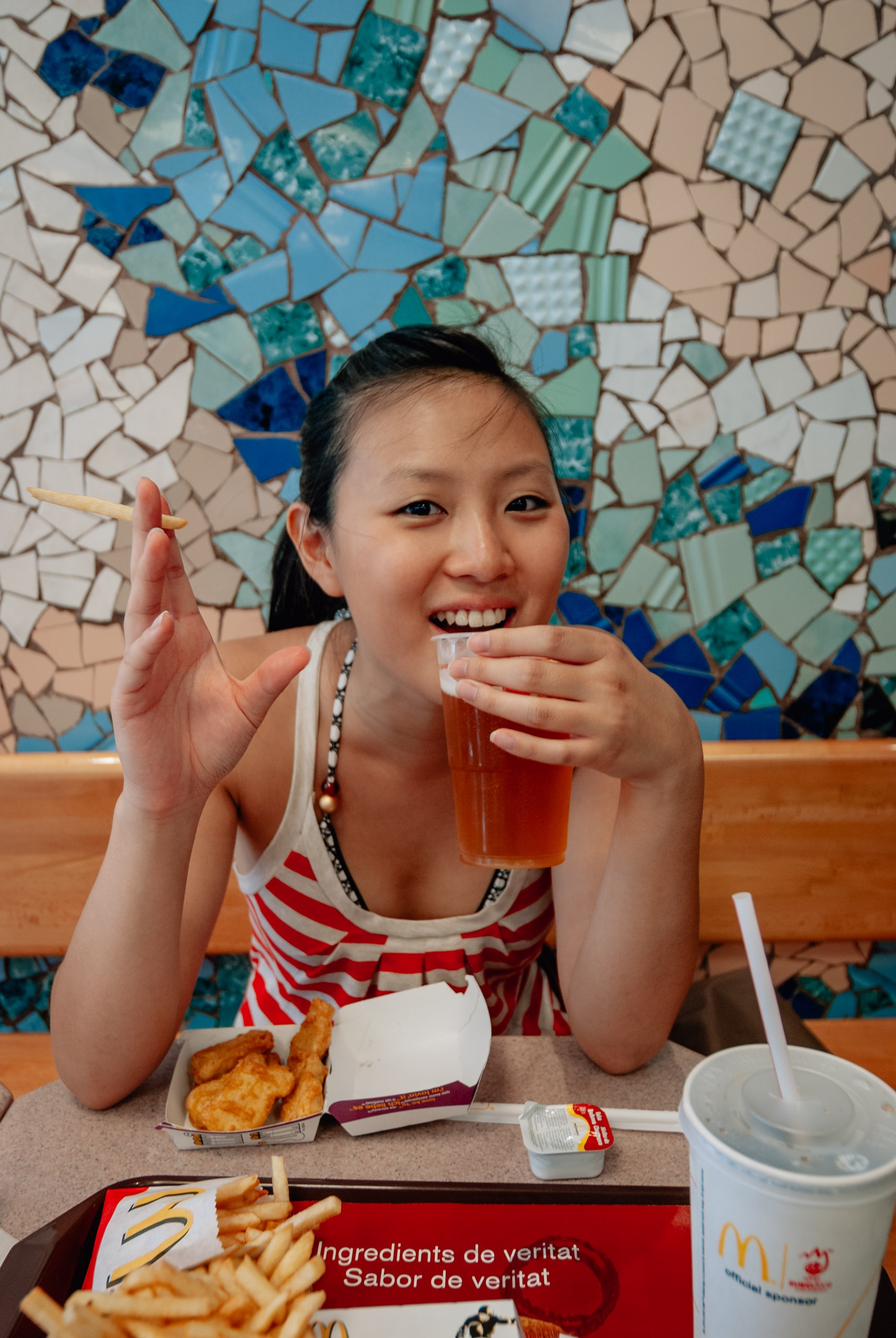 Enjoying a nugget and  fries 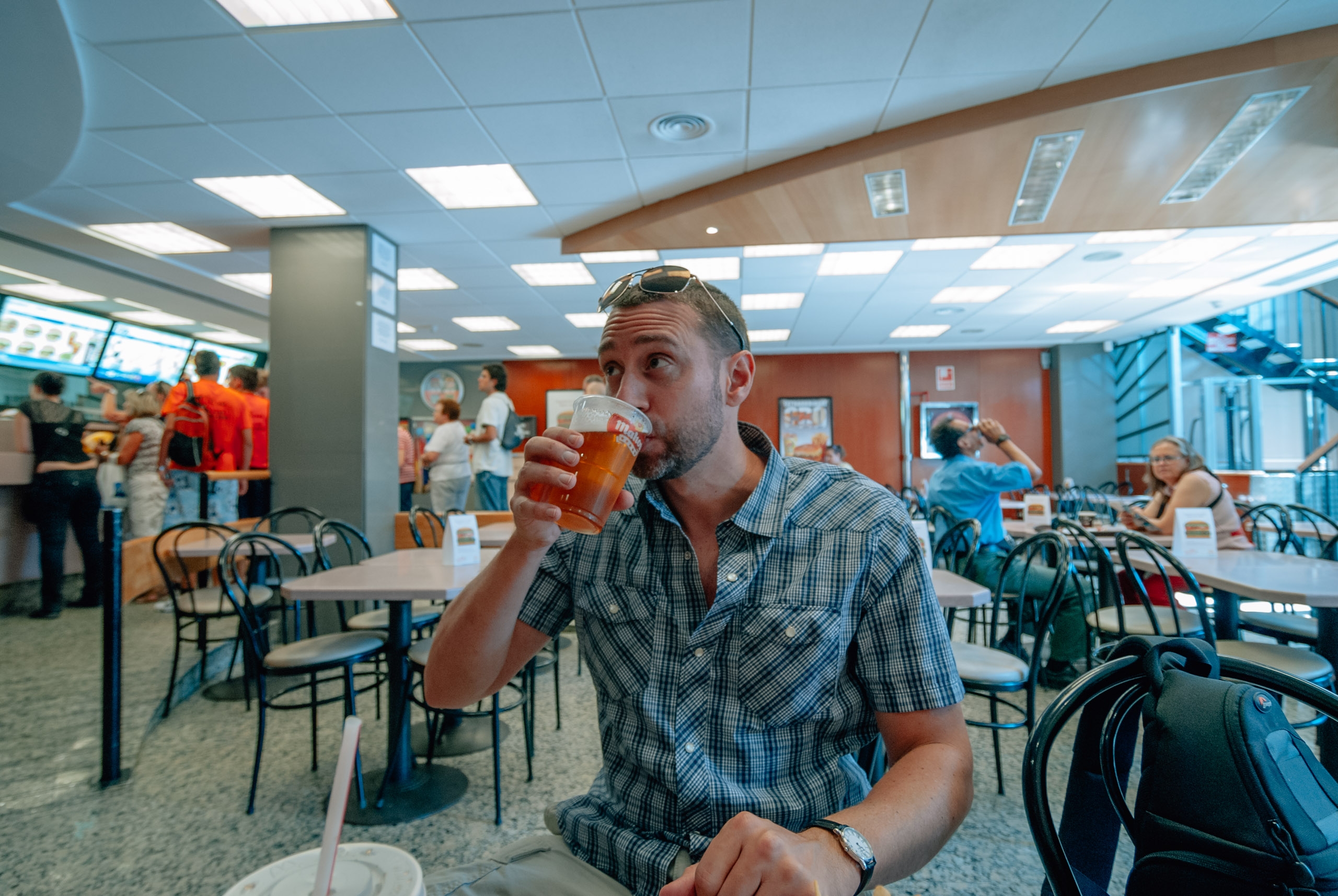 We toured the inside of the church, which is a massive construction project, and quickly got on queue for the lift to the top of the spires.  When I was last here in 1989, you could only walk up about 600 steps.  The elevator, while about a 45 minute wait, was a big improvement.  From the top you could see the entirety of the city all the way to the coast.  The views were amazing.  I hope to return when the church is complete, which is supposed to be around 2026 (yikes).  Much has been done since I was there 19 years ago, so I guess I can be optimistic they'll complete it. 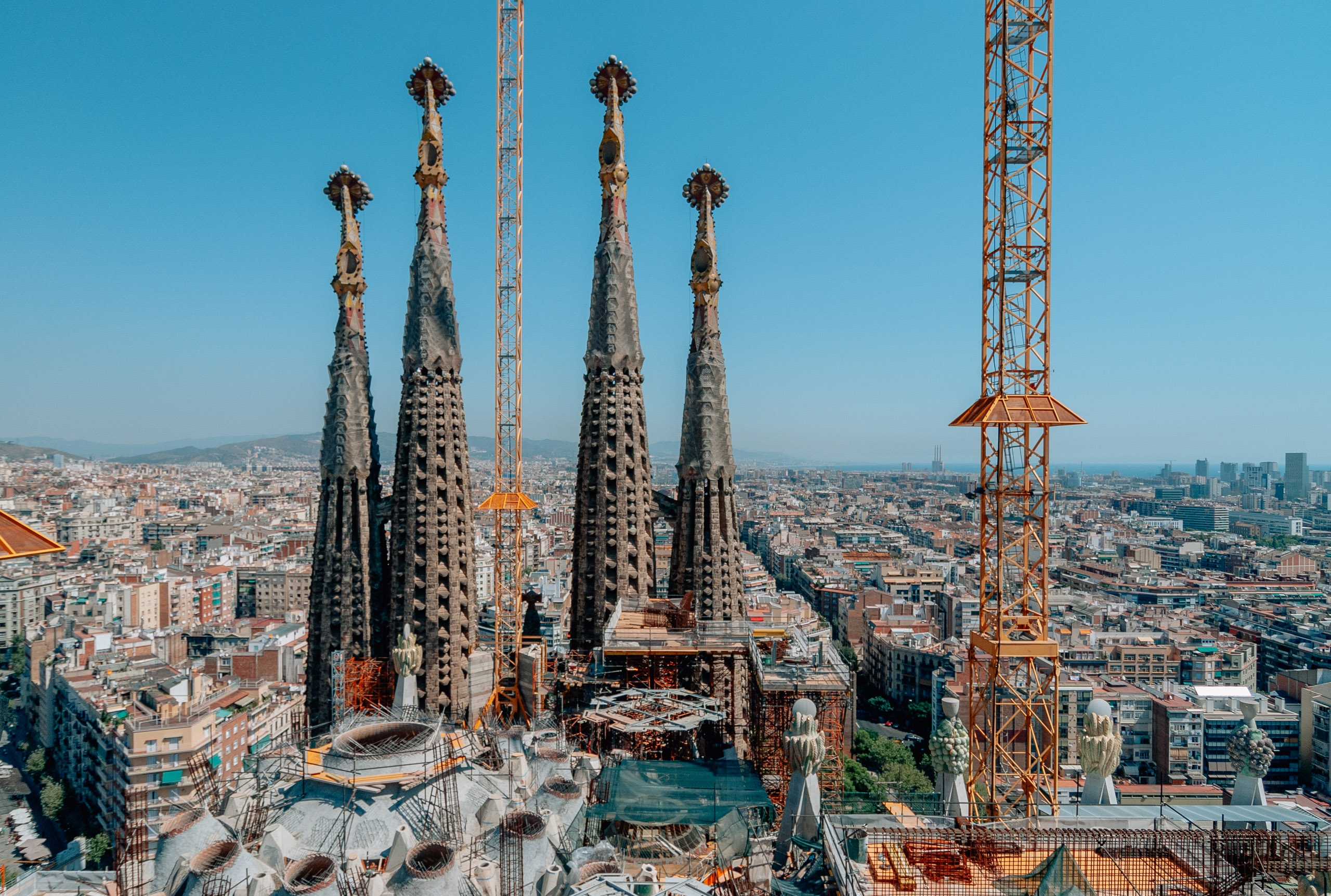 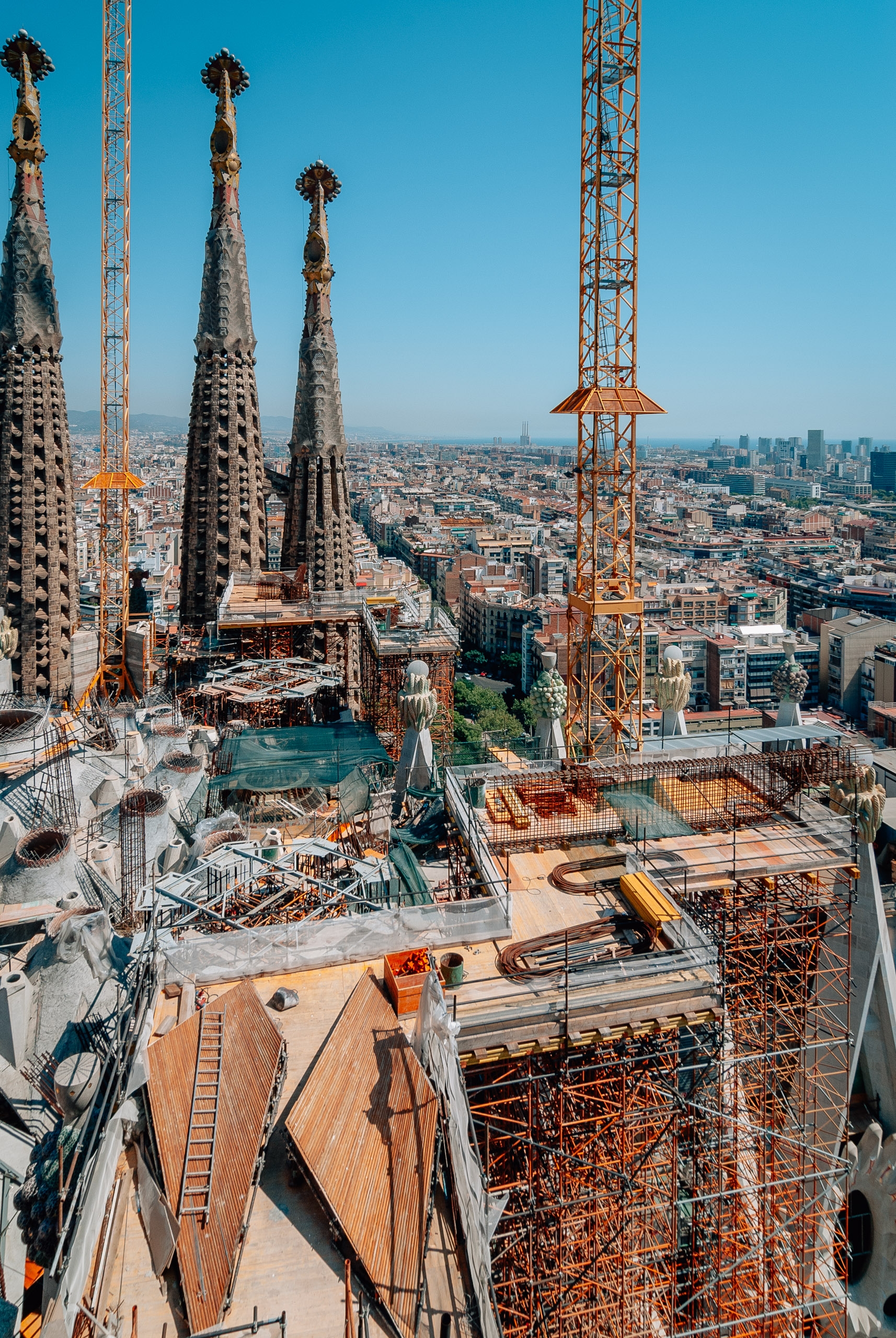 A massive construction project in progress

The steps to the top of the spire 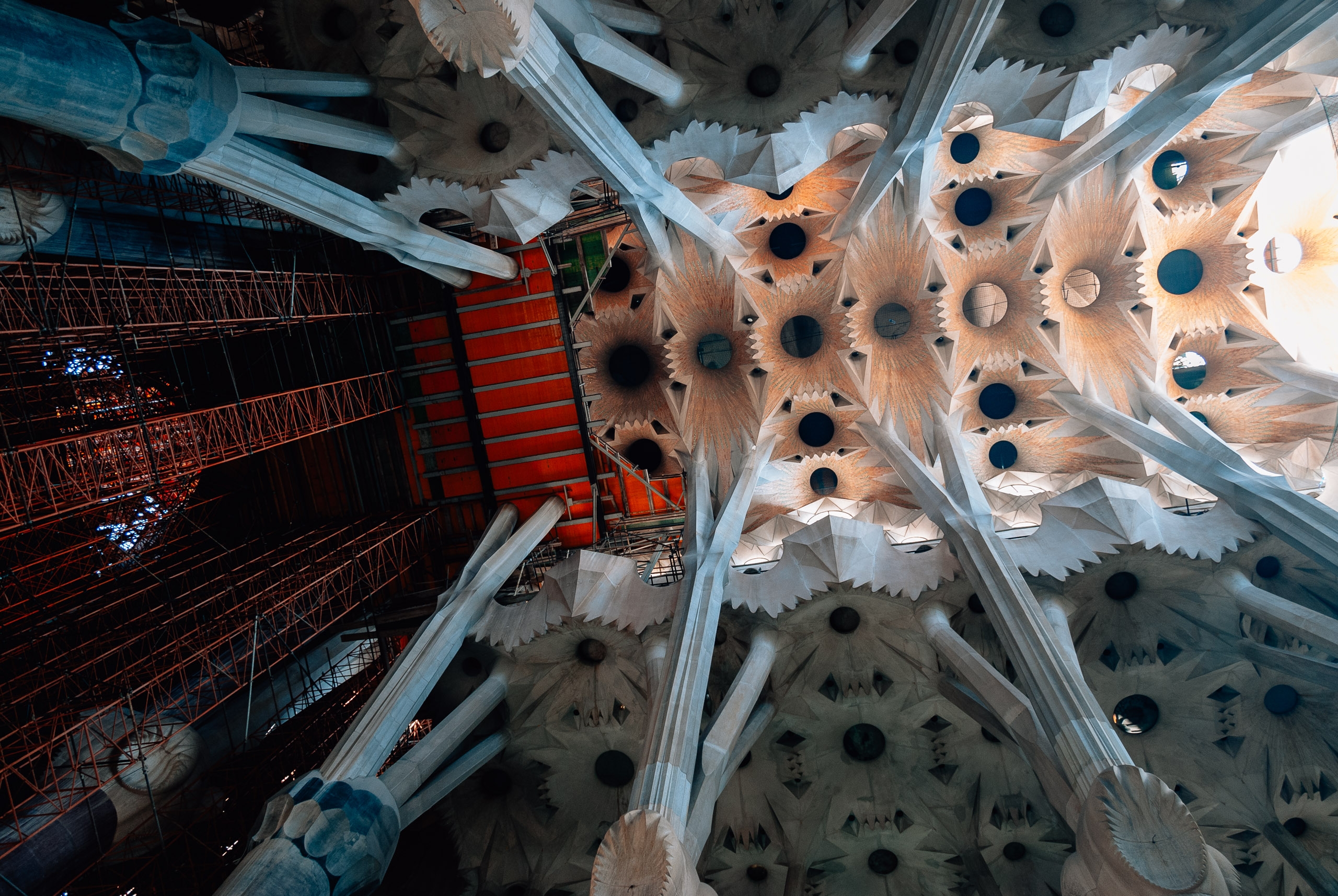 The skeletal interior of the massive church

Our next stop was to visit Park Guell, a Gaudi-designed affluent gated community in the hills overlooking the city.  The project was a commercial failure, so the land's sculpted gardens and common areas were ceded to the city as a park in 1918.  The park is like nothing you've seen anywhere.  At the time many of its structures were designed, Gaudi was also commissioned to design set-pieces for an operatic production of Hansel and Gretel.  It shows.  The park is a big tourist draw today, but surprisingly is free to visit like many of the attractions in Barcelona. 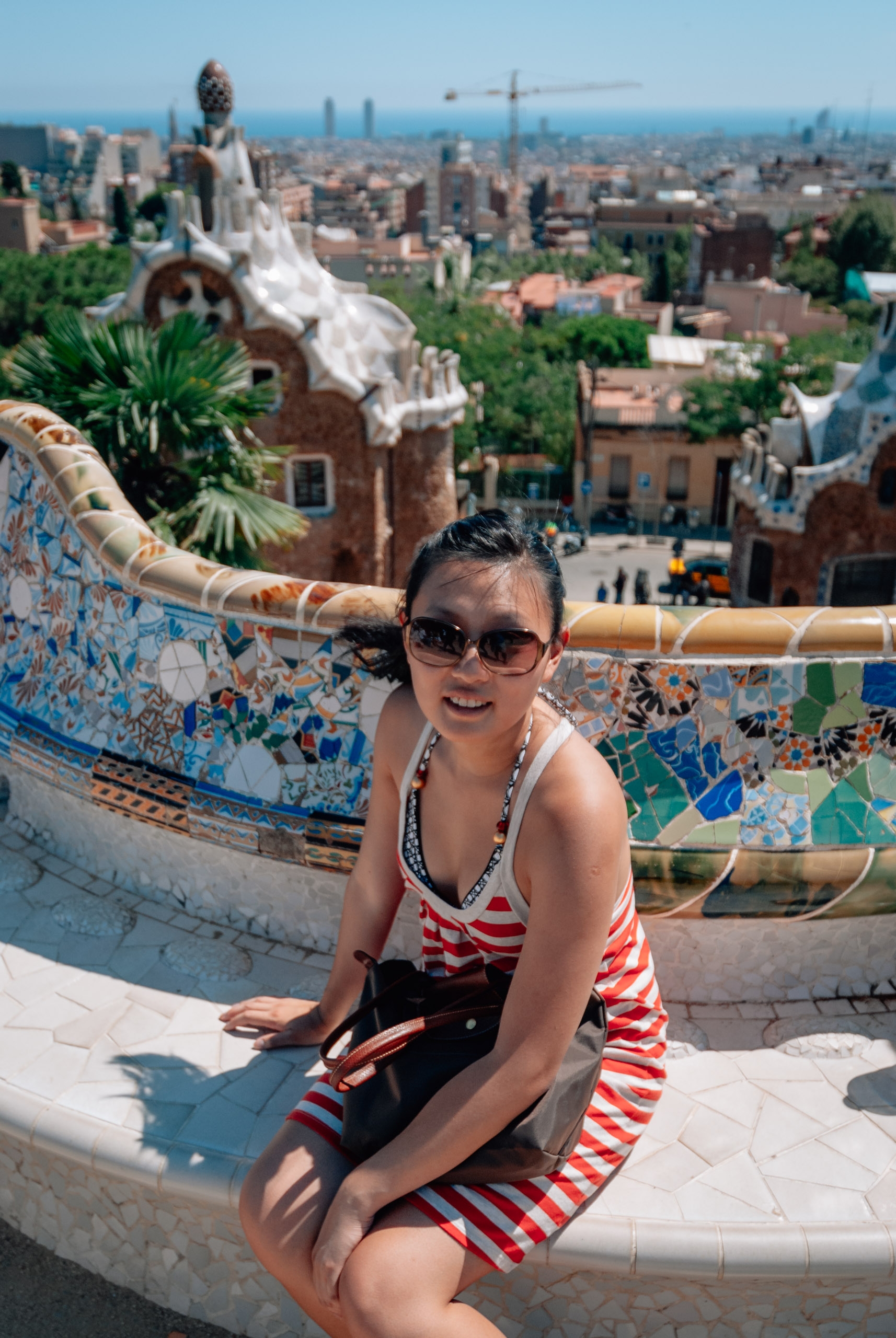 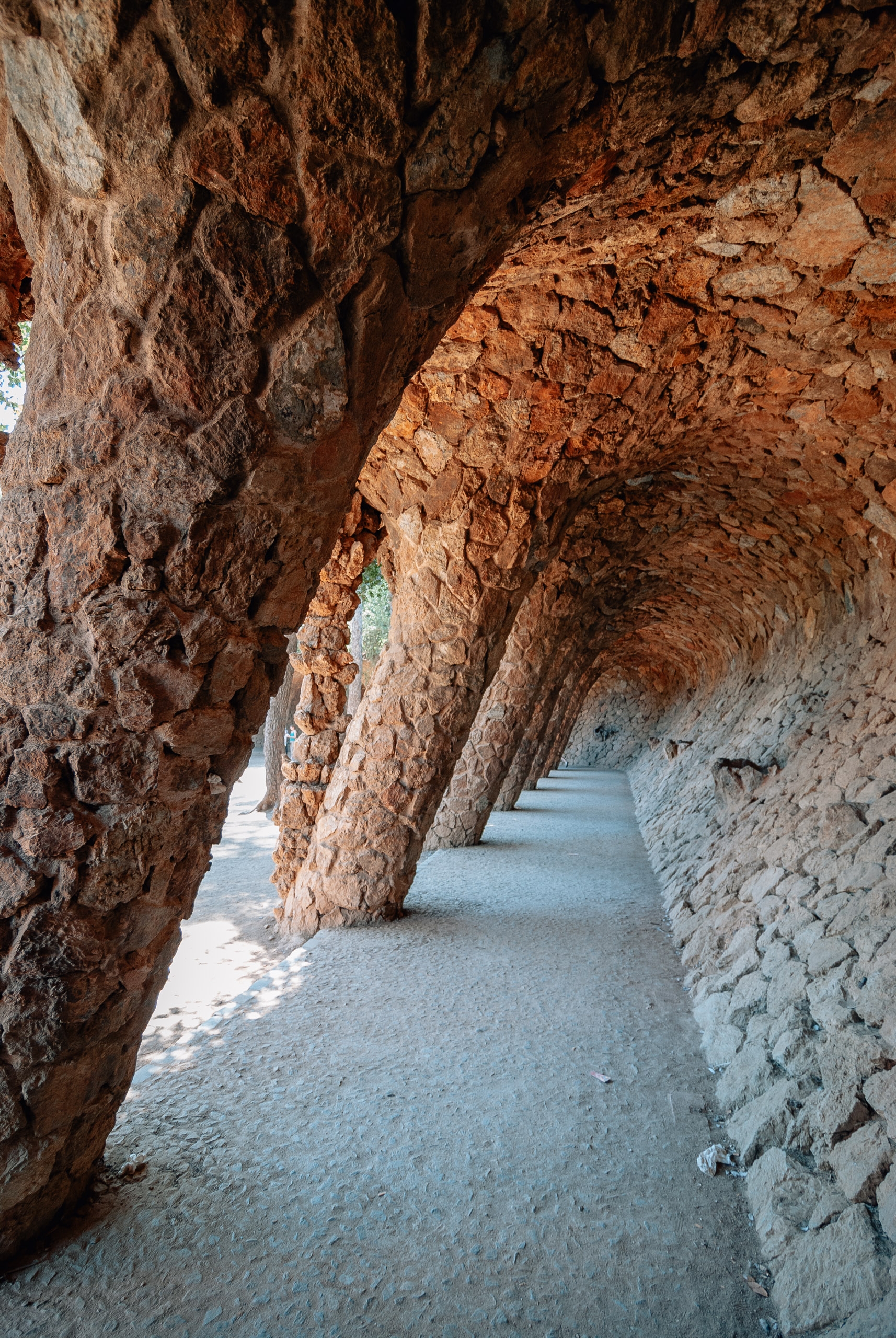 On our way back, we stopped along Barcelona's high street, Passeig de Gracia, to check out the high end shopping.  We didn't stay long, it seemed like Anytown Mall - nice retailers, but nothing we don't have in Union Square back home.  We returned to the hotel, changed and went down to the beach for some sand and surf. The beaches are nice; crowded but not overly so.  There is a constant chorus of South Asian men selling, "Fanta, Cola, Cerveza, Agua...Fanta, Cola, Cerveza, Agua..." Literally, over and over up and down the beach, dozens of these vendors are constantly singing out their wares.  You'll mostly be left alone, except for some ladies offering beach massages which can only be described as gross. 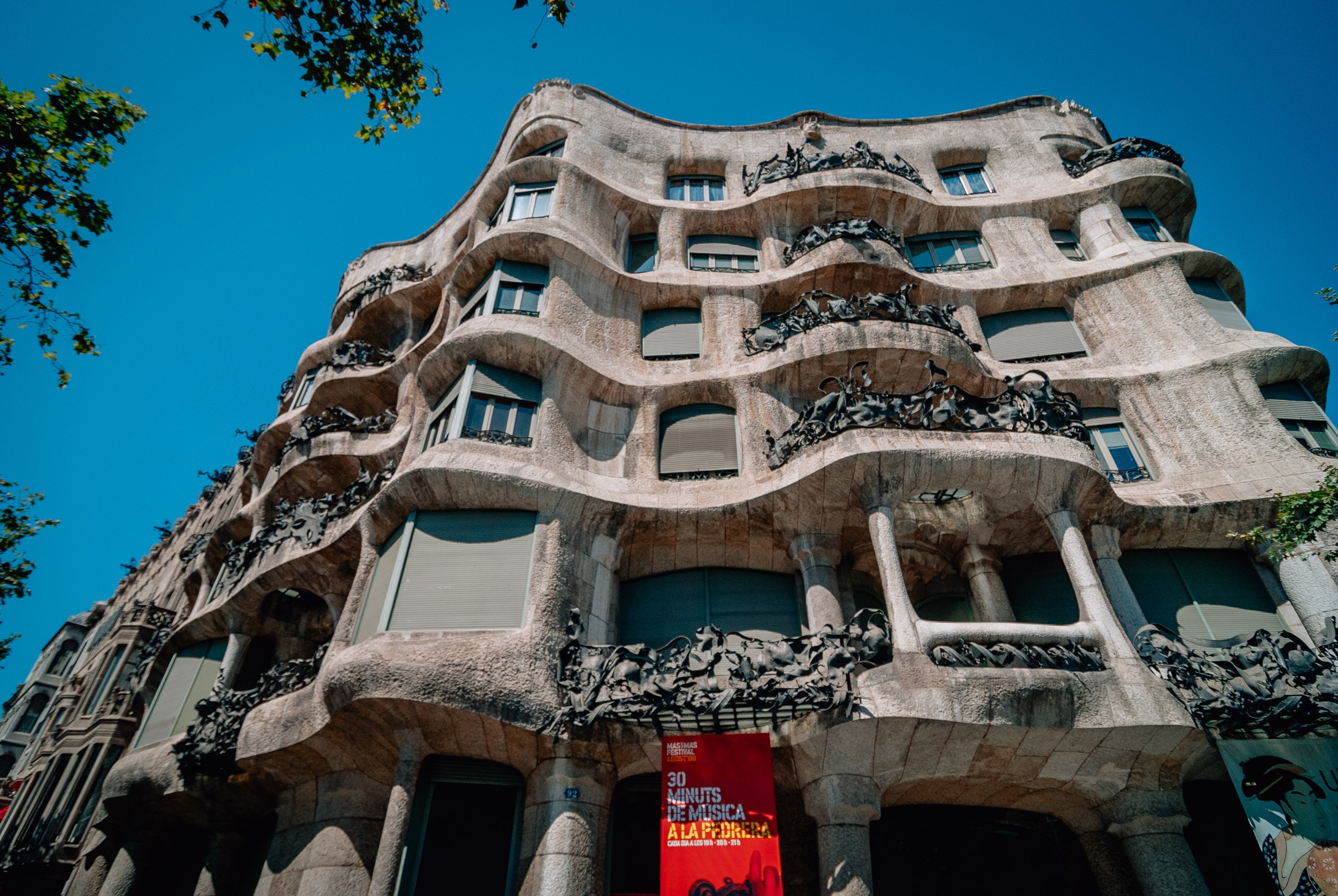 That night we went to Tapas in the El Born District, a trendy restaurant and bar enclave near the Rambla.  The food was great and inexpensive. We packed that night for our flight to Malaga at 6:30AM the next day. 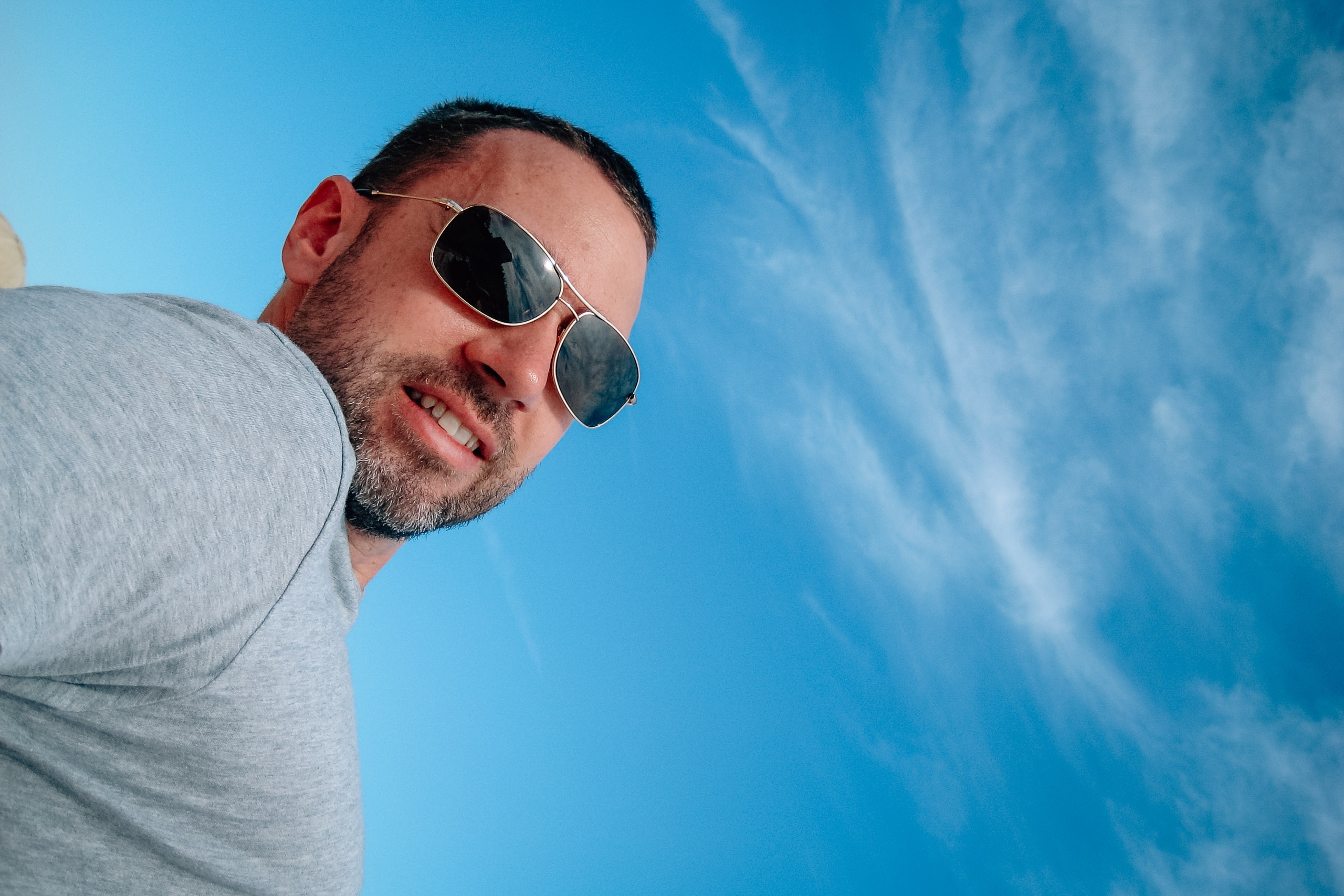 Barcelona is definitely on my short list of favorite cities in Europe (Paris is still on top).  Barcelona has become a food town, with more Michelin-starred restaurants than ever before, and starting to rival Madrid as Spain's culinary capitol.  The food here is mostly Basque and Catalan, a combination of French and Spanish with Barcelona's terrific seafood taking center stage.  The fish doesn't impress me much, but those in the know seemed very impressed.  As for me, I liked the Tapas, the Catalan roast chicken and of course, El Big Mac.
tags: barcelona, europe, spain, travelogue