dark mode
A Tribute in Light
September 12, 2011
The Tribute in Light is annual lighting installation to commemorate the September 11, 2001 terrorist attacks by recreating a visage of the World Trade Center's Twin Towers. The memorial consists of 88 search lights arranged into two squares and projected into the night sky from the roof of a parking garage a few blocks south of the actual World Trade Center site. The beams of light project 4 miles into the night sky, and is the strongest shaft light ever projected. Weather permitting, the sight can be breathtaking.

I went down to Brooklyn on Saturday night to photograph the lights, but they were switched off just as I arrived. The lights were being tested ahead of Sunday's memorial lighting, which went from sundown on September 11 until sunrise September 12. I was disappointed I didn't get any pictures Saturday as the conditions were much better than Sunday. It had been cloudy all day, and a low fog hung over lower Manhattan obscuring much of the view. 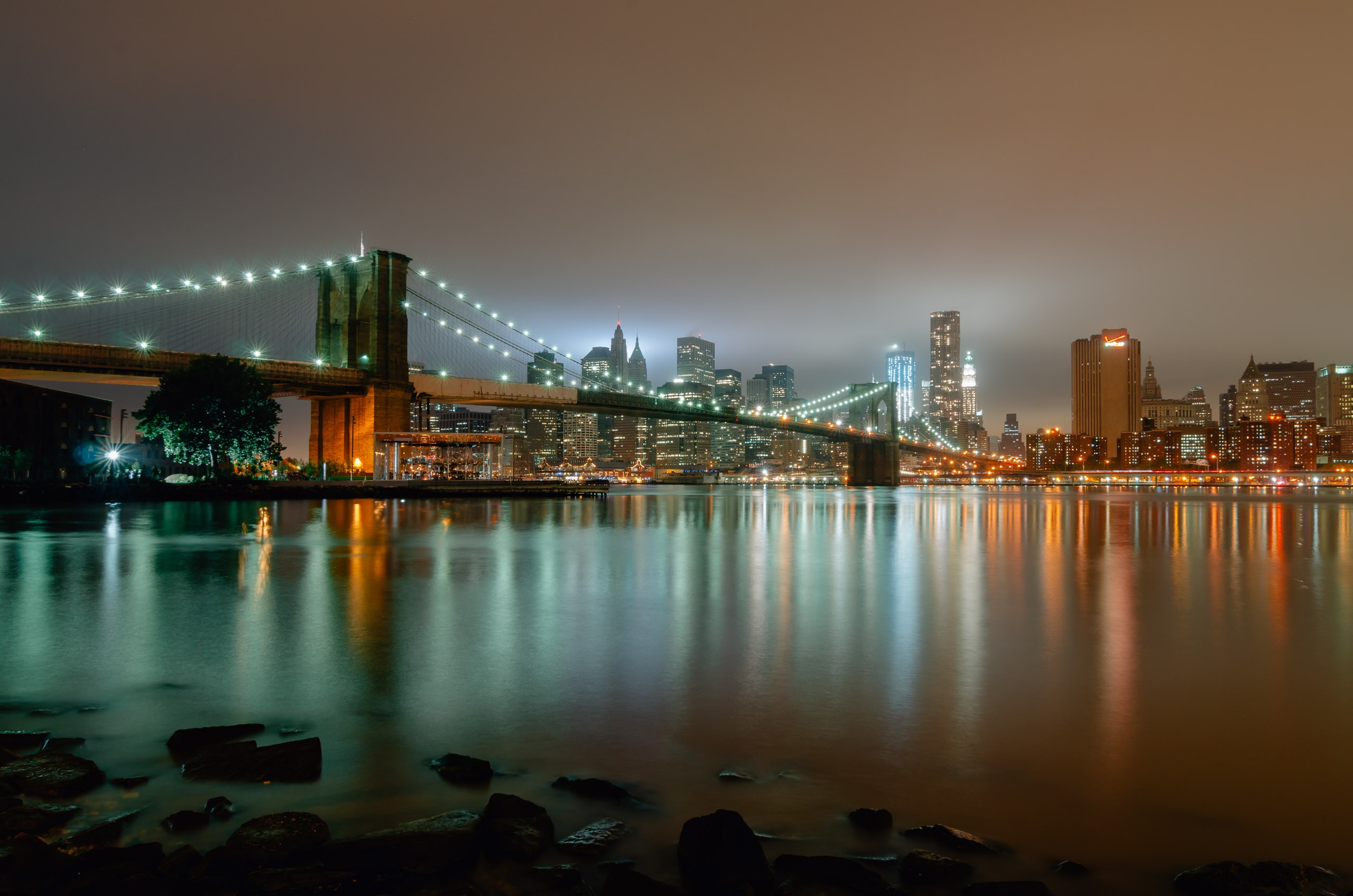 The Brooklyn Bridge from DUMBO. The lights are obscured by fog (click to enlarge)

I thought the fog might lift so I waited around by the Brooklyn Bridge for about an hour, before the mosquitoes convinced me to try my luck elsewhere. I walked around the base of the bridge toward Brooklyn Heights where the view improved slightly. 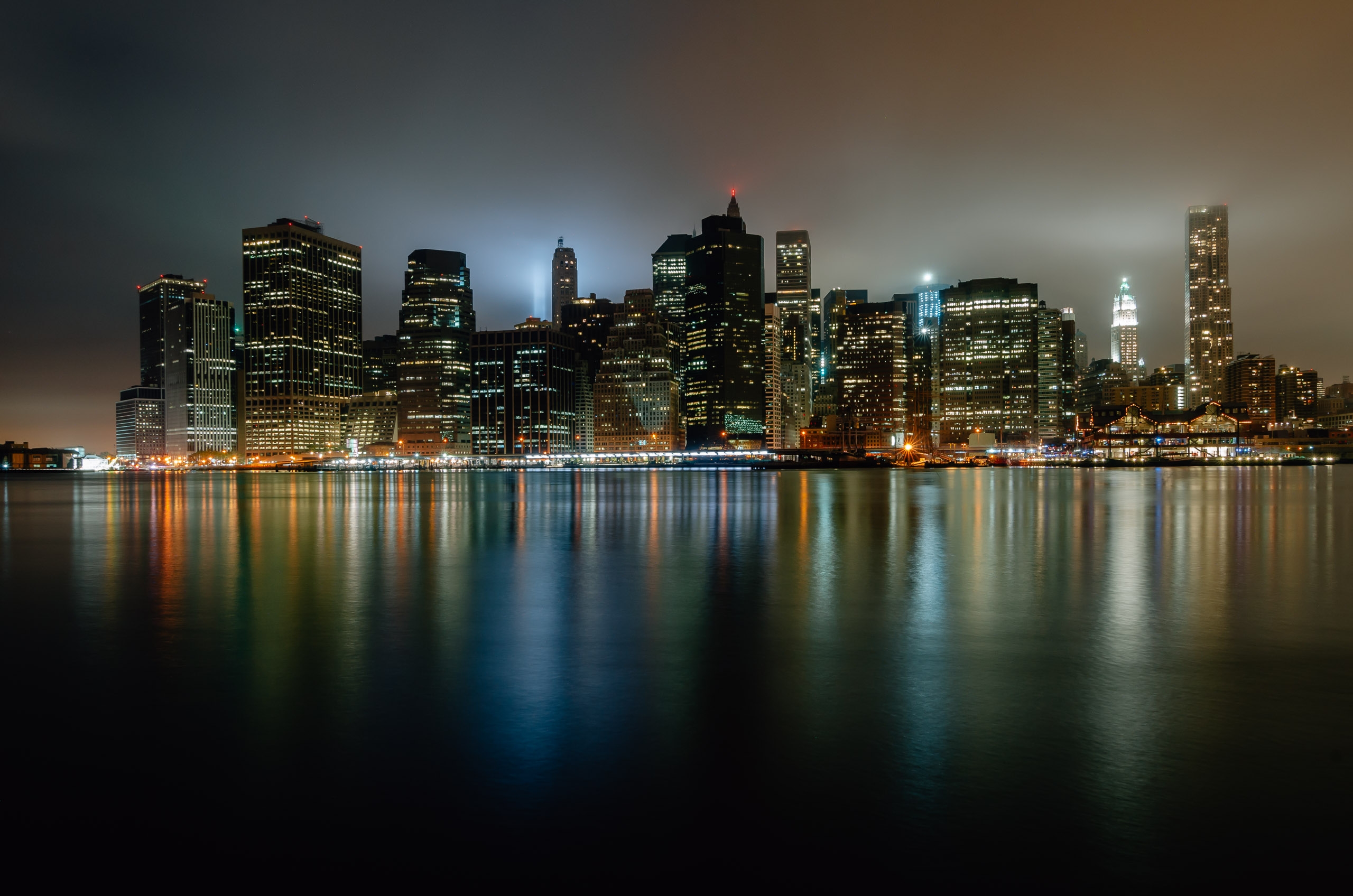 The Lower Manhattan Skyline from Brooklyn Heights (click to enlarge)

Walking out on Pier 1, the visibility was somewhat improved. The fog was starting to break a bit and you could just make out the lights over the skyline. For one brief moment, and the only time that evening, the fog broke enough to see the lights en their entirety. 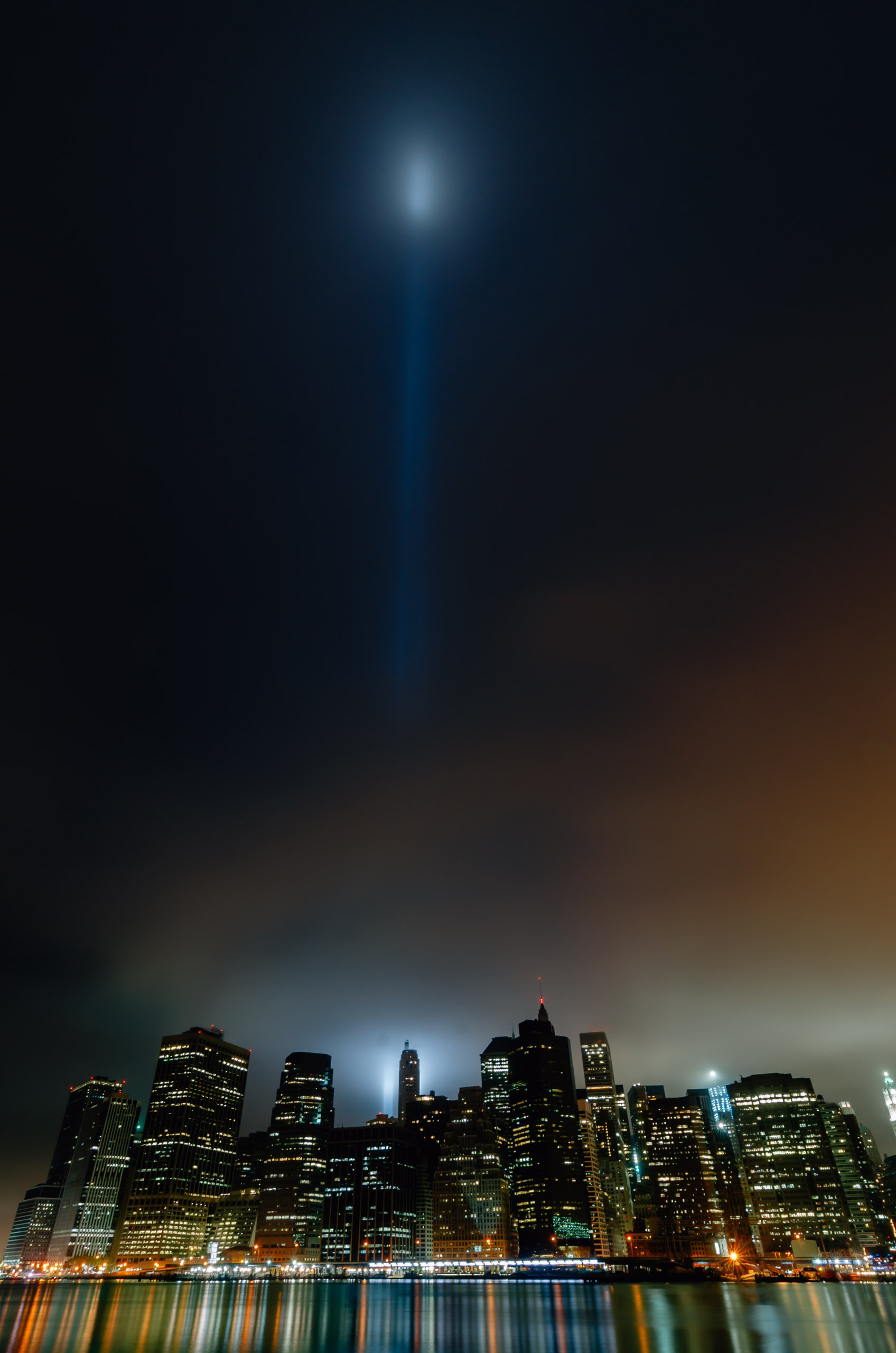 The Tribute in Light rising over Lower Manhattan (click to enlarge)

Brooklyn Heights also has a terrific view of the Statue of Liberty. I don't have much of a zoom lens, but I took this from the end of Pier 1 looking out toward Liberty Island. The fog coming off the ocean was being lit a bright orange by all the lights along the port. 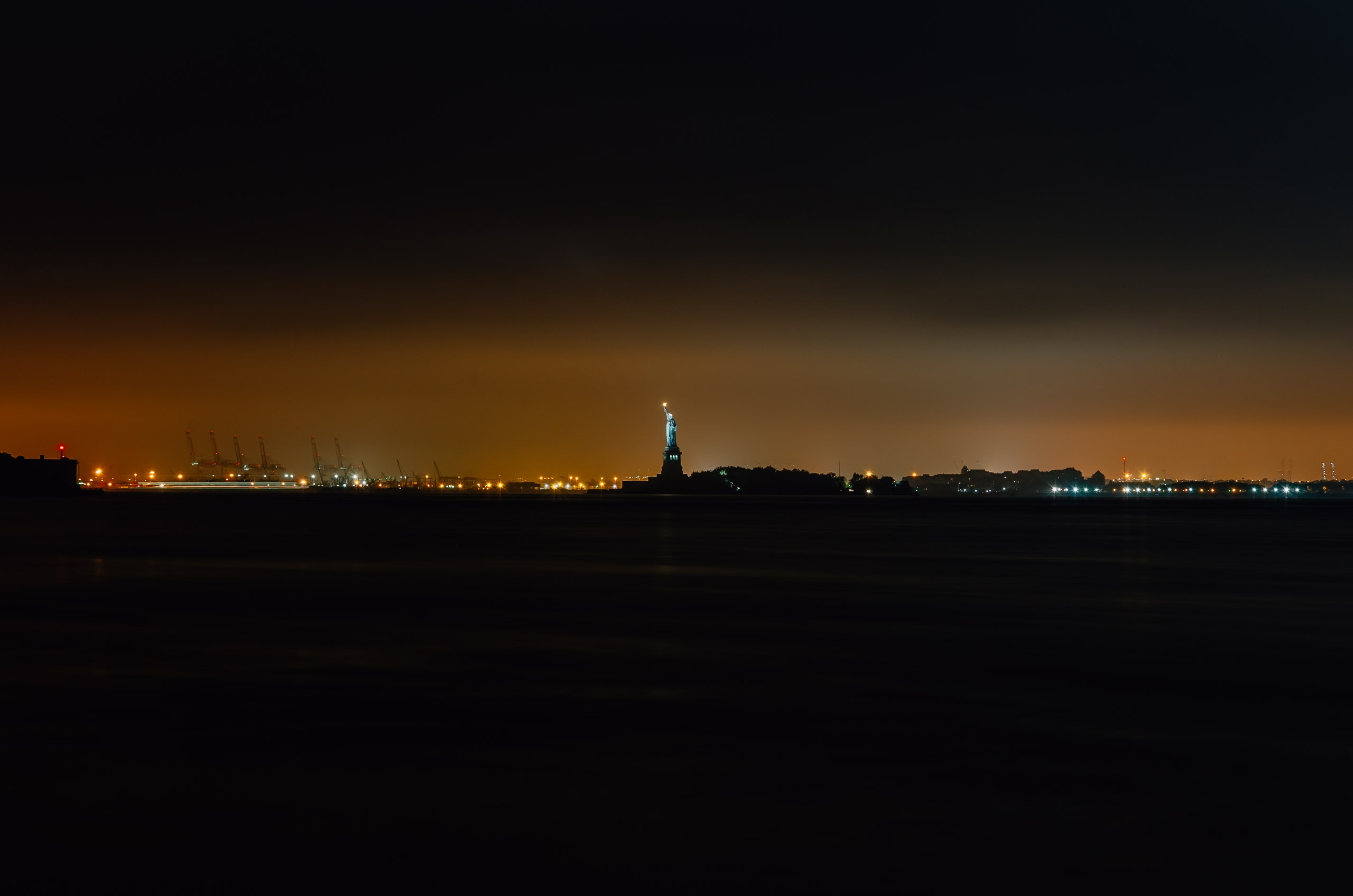 After a few hours, I was convinced the fog wasn't going to break so I headed back into Manhattan. I took the 2 train to Wall Street and walked over to where the light installation was running. As I walked past Trinity Church, you could see the brilliant lights rising above the nearby buildings. 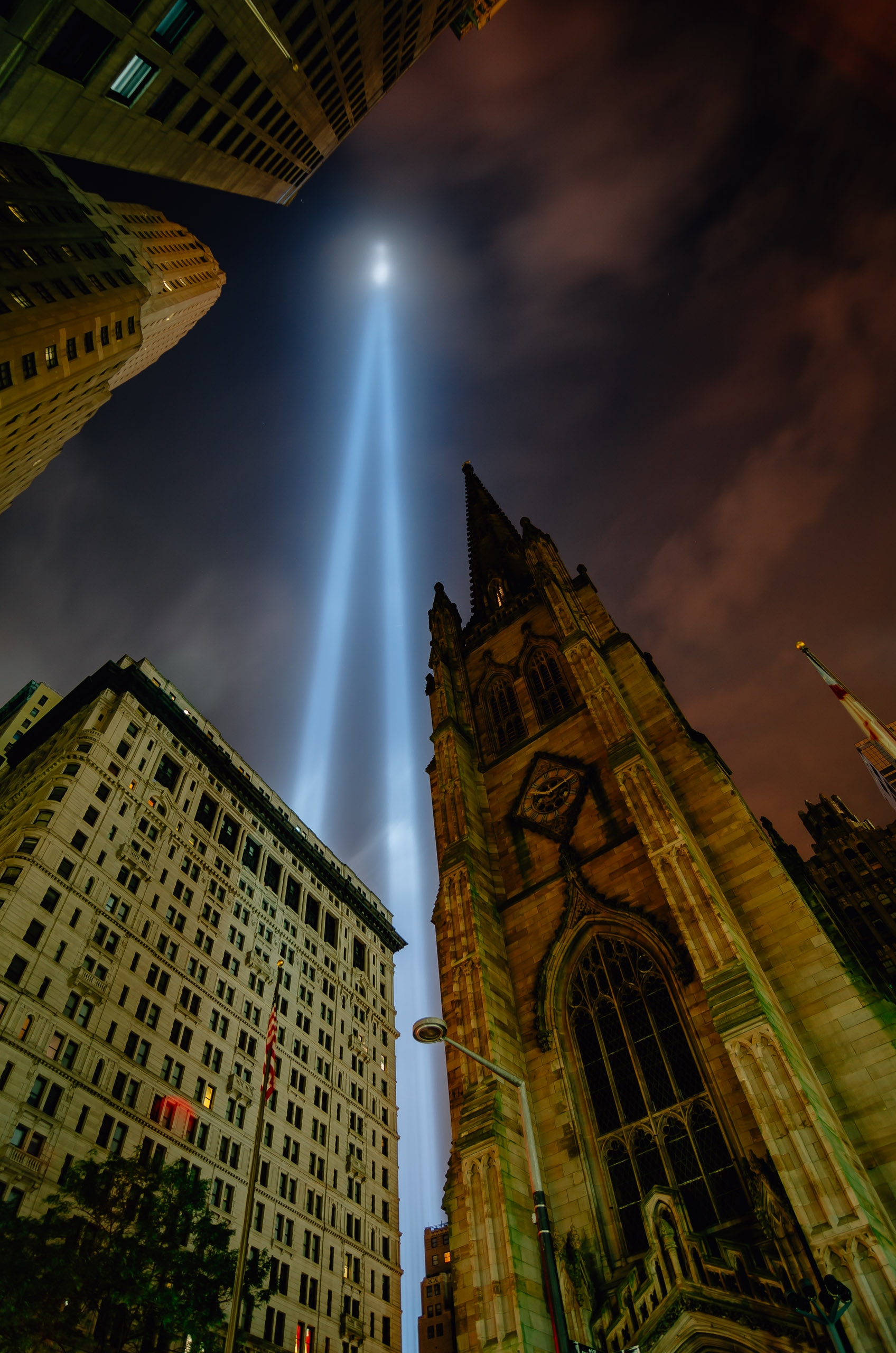 The bright lights attract and confuse thousands of migratory birds. In prior years, the lights would be shut off every 20 minutes to allow the disoriented birds to get on with their journey. They weren't doing that this year, and the birds looked like confetti floating around the beams of light.

Eventually I made my way down to the spot from where the lights are projected. Atop a parking garage surrounded by biodiesel generators, the 88 searchlights produce an astonishing amount of light. Its surreal to see in person, and I'm sure looks like a bad special effect in these photos. 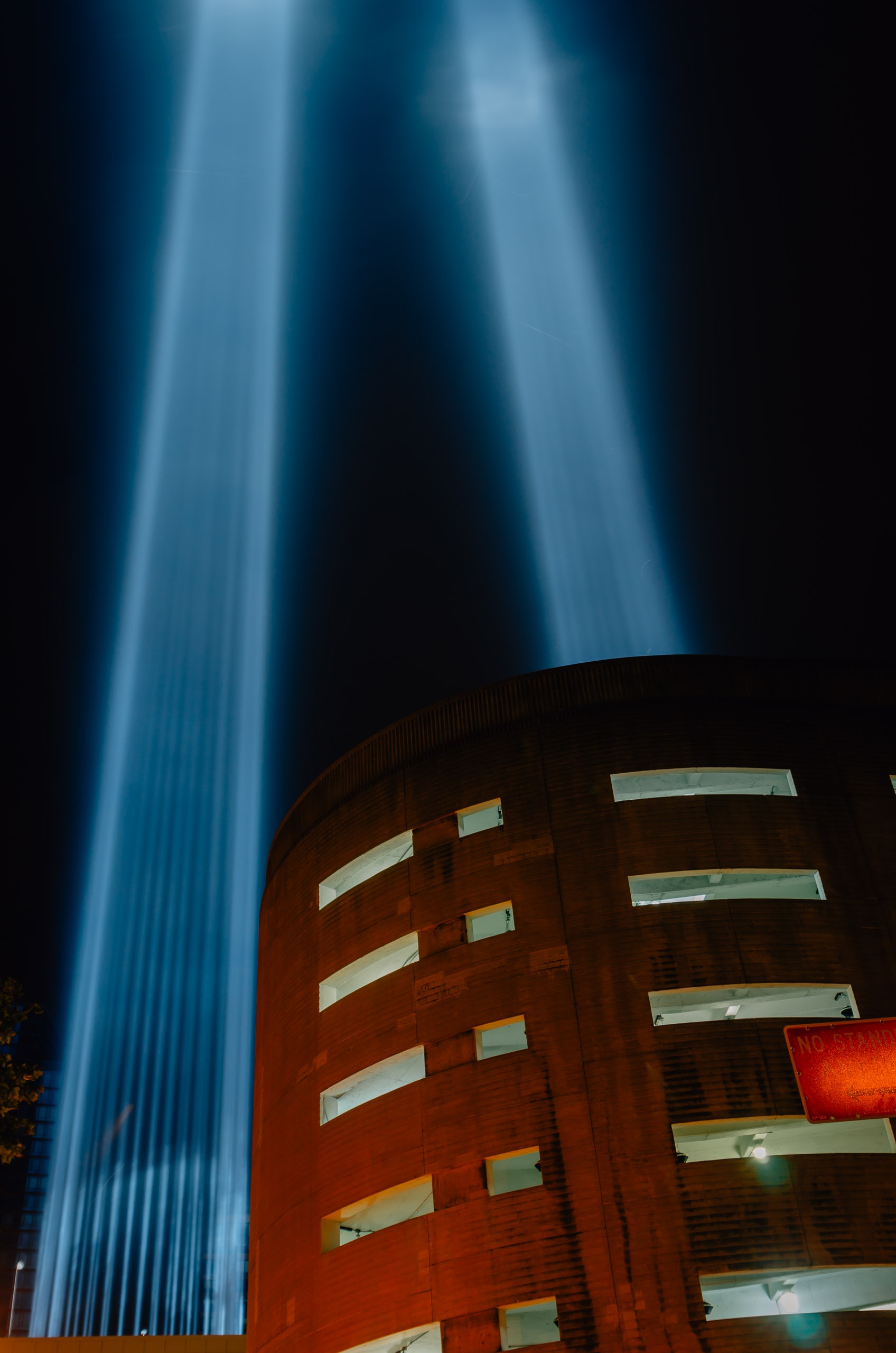 At the base of the light (click to enlarge) 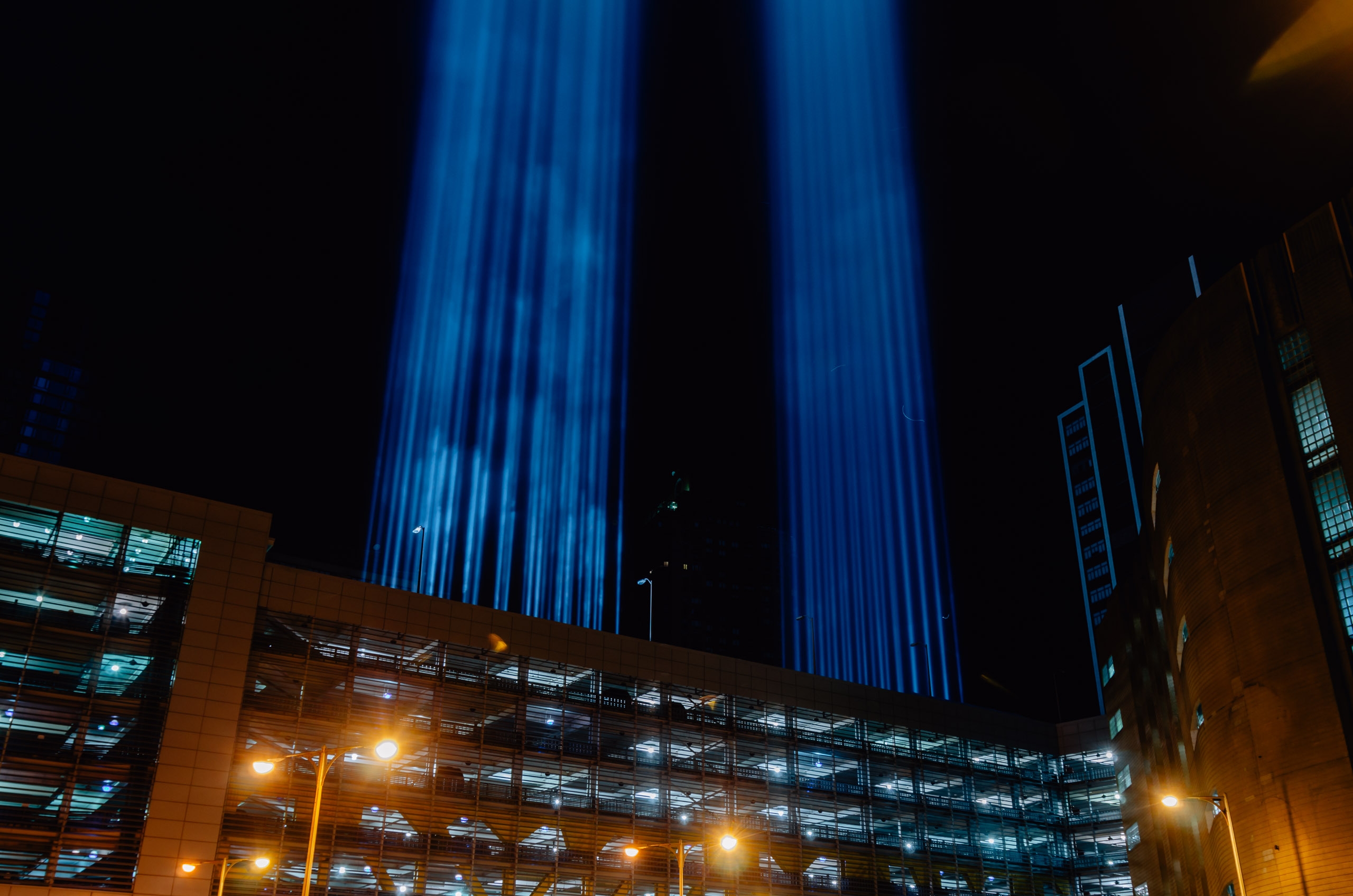 The parking structure holding the lights (click to enlarge)

The security and police presence was immense. Presidents Bush and Obama had spoken at the World Trade Center site earlier in the day, and the city was in a heightened state of alert all weekend. There were hundreds of photographers milling about on every corner, from Brooklyn to Lower Manhattan. I talked to people who had traveled from all over the world to photograph the lights, and its a shame there wasn't better weather. 2011 is supposed to be the last year for this installation, although its been the "last year" for several years now. Already a group is organizing to make the lighting an ongoing annual event. I don't know the cost of doing this every year, but I've heard its equally mind-boggling.

After my last few photos, I walked by the actual World Trade Center site. The memorial officially opens today, September 12, and the crowds are expected to be immense. You have to reserve a ticket in advance, and reservations are booked through Thanksgiving already. I couldn't see the memorial from the street, but what I have seen I really like. I caught a cab and got home around 3:30AM. I haven't done an all-nighter in quite some time.

I think the design and execution of this memorial is simply terrific. Its a tasteful, subtle and unique work of art, and a gentle reminder to never forget. I have many more pictures I'll post throughout the week, but these are a few of my favorites.
tags: new york city, tribute in light