dark mode
Visit to the Richard Nixon Presidential Library
August 31, 2012
A few weeks ago we were in Chino Hills, California to attend a wedding and had a few hours to kill on a Sunday before the ceremony. Consulting a map I was surprised to learn that the Richard Nixon Presidential Library was only about 25 minutes away in Yorba Linda. Nixon is an interesting figure, most known for his disgraceful exit following the Watergate scandal, but he did have a notable political career and was an accomplished diplomat before his presidency imploded. I was curious to see how his legacy would be presented, so we decided to escape the 99 degree heat and visit the museum. 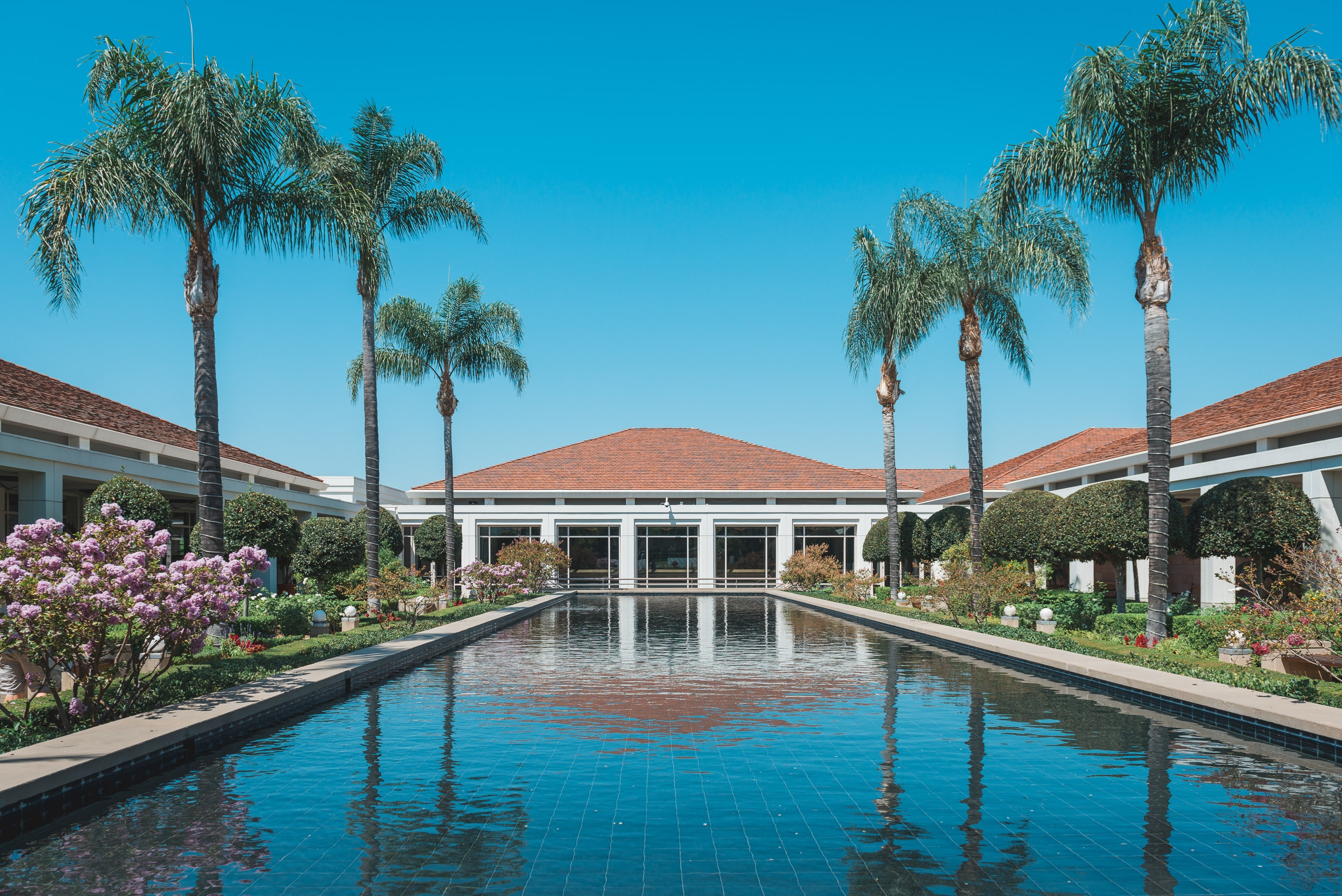 The reflecting pool outside the Nixon Library Museum

The first thing that struck me about the Nixon library is that it's a remarkable facility in honor of a disgraced politician. He obviously has his fans and backers as evidenced by the millions of dollars raised to build this museum. The grounds consist of a museum, a botanical garden, the graves of Pat and Richard Nixon, Nixon's helicopter and the house where he was born. 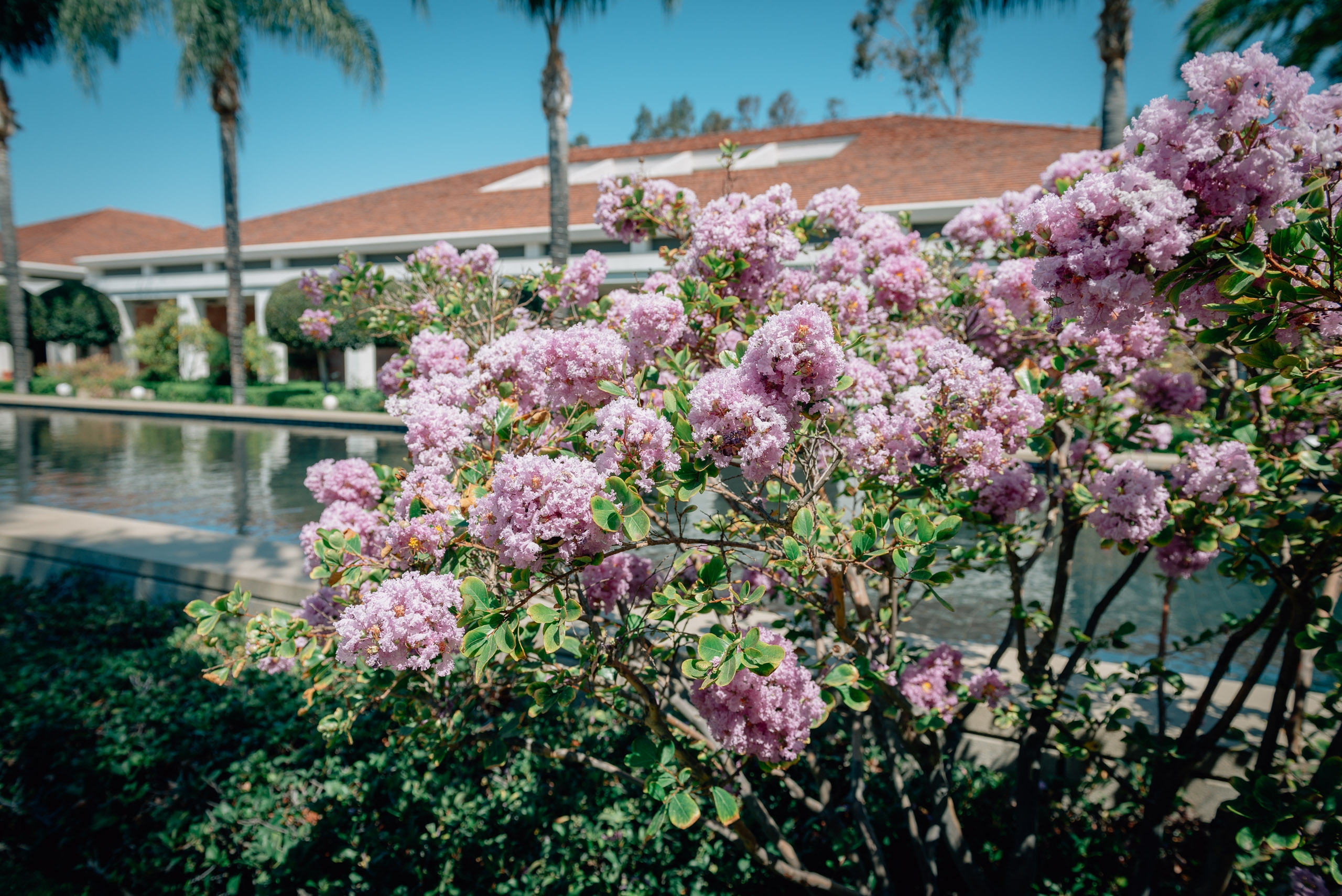 The gardens lining the reflecting pool

The gardens surrounding the museum are meticulously manicured and impressive. The Library also serves as an event venue, and a wedding was underway when we arrived. It would be hard to avoid some kind of political statement by getting married at the Nixon Library, but politics aside it is a lovely setting.

Given the growing heat, we opted to do the outdoor portions of the tour first, starting with Nixon's Marine One helicopter on display at the edge of the museum grounds. 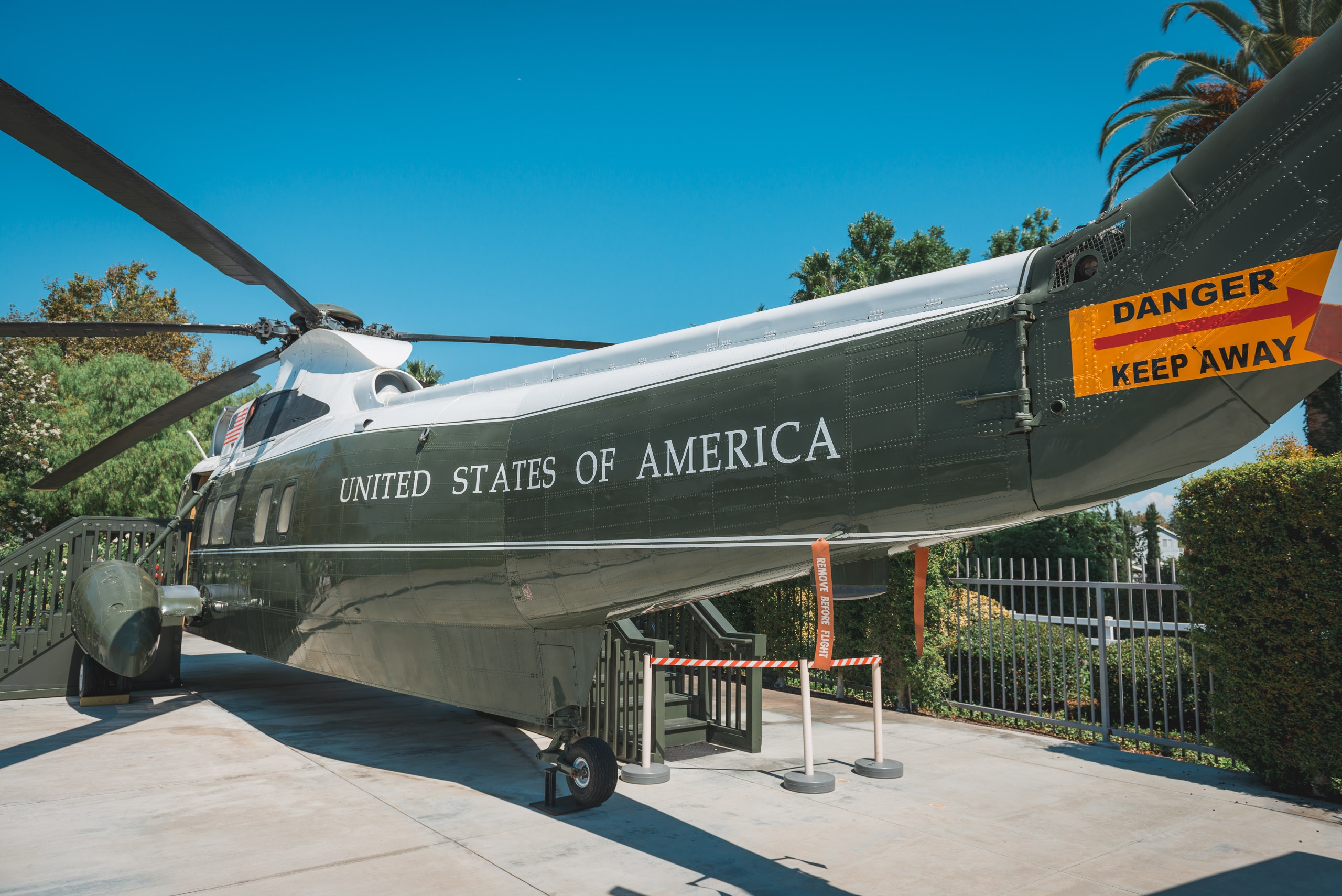 This is one of two official helicopters used during the Nixon administration. Both traveled to Egypt for historic diplomacy with Anwar Sadat, with one being left behind as a gift from the United States. 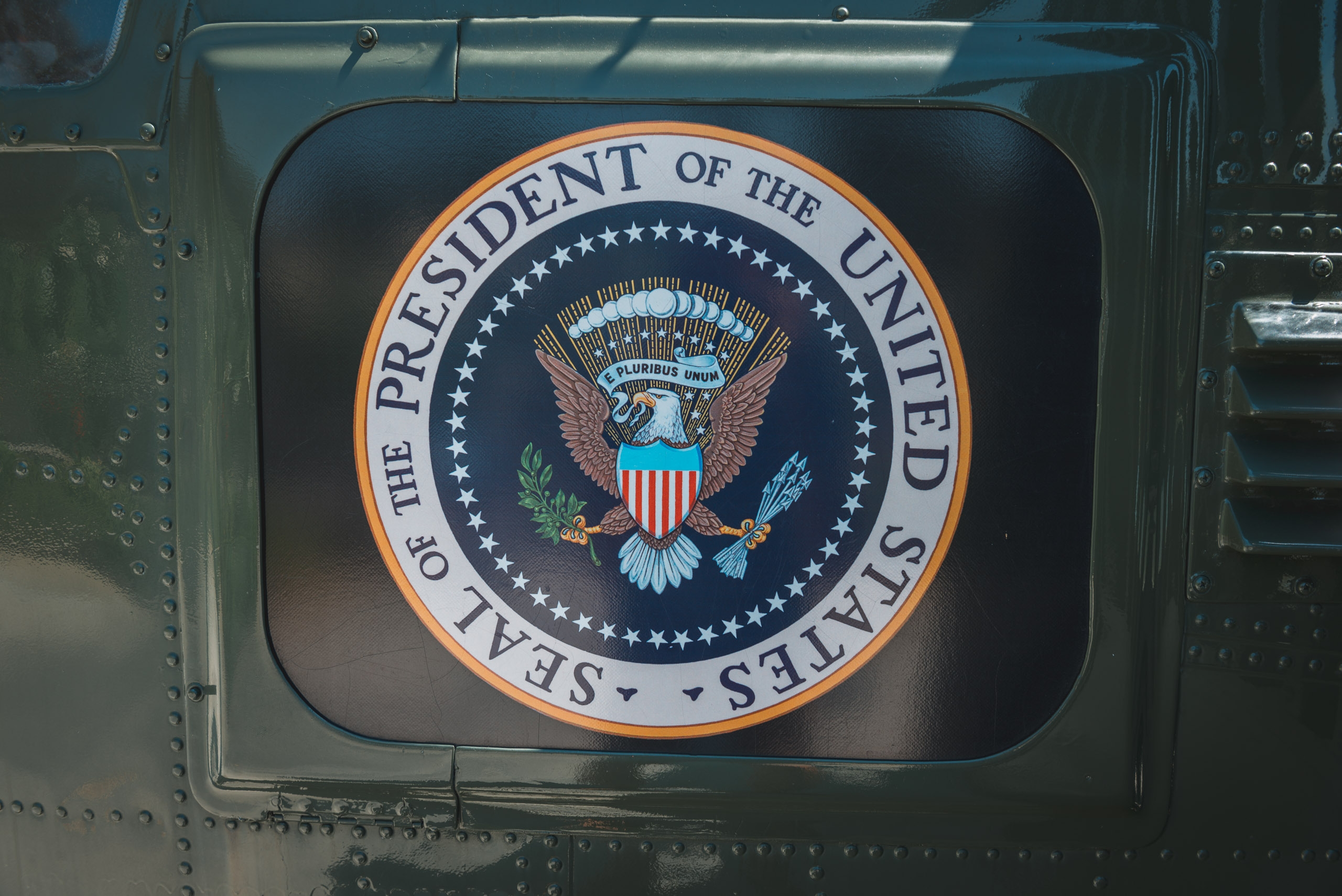 The Presidential Seal on Marine One

This particular helicopter was found in storage a few years ago. The engines and avionics were removed, and the interior and exterior were painstakingly restored to 1970s condition. You can tour the inside of the helicopter, but not photos are permitted inside.

This is the helicopter that Nixon took upon leaving the Whitehouse, giving his now-famous four-finger wave. According to the docent, I was not the first person to recreate this photo.

Richard Nixon trying to look upbeat after resigning the Presidency 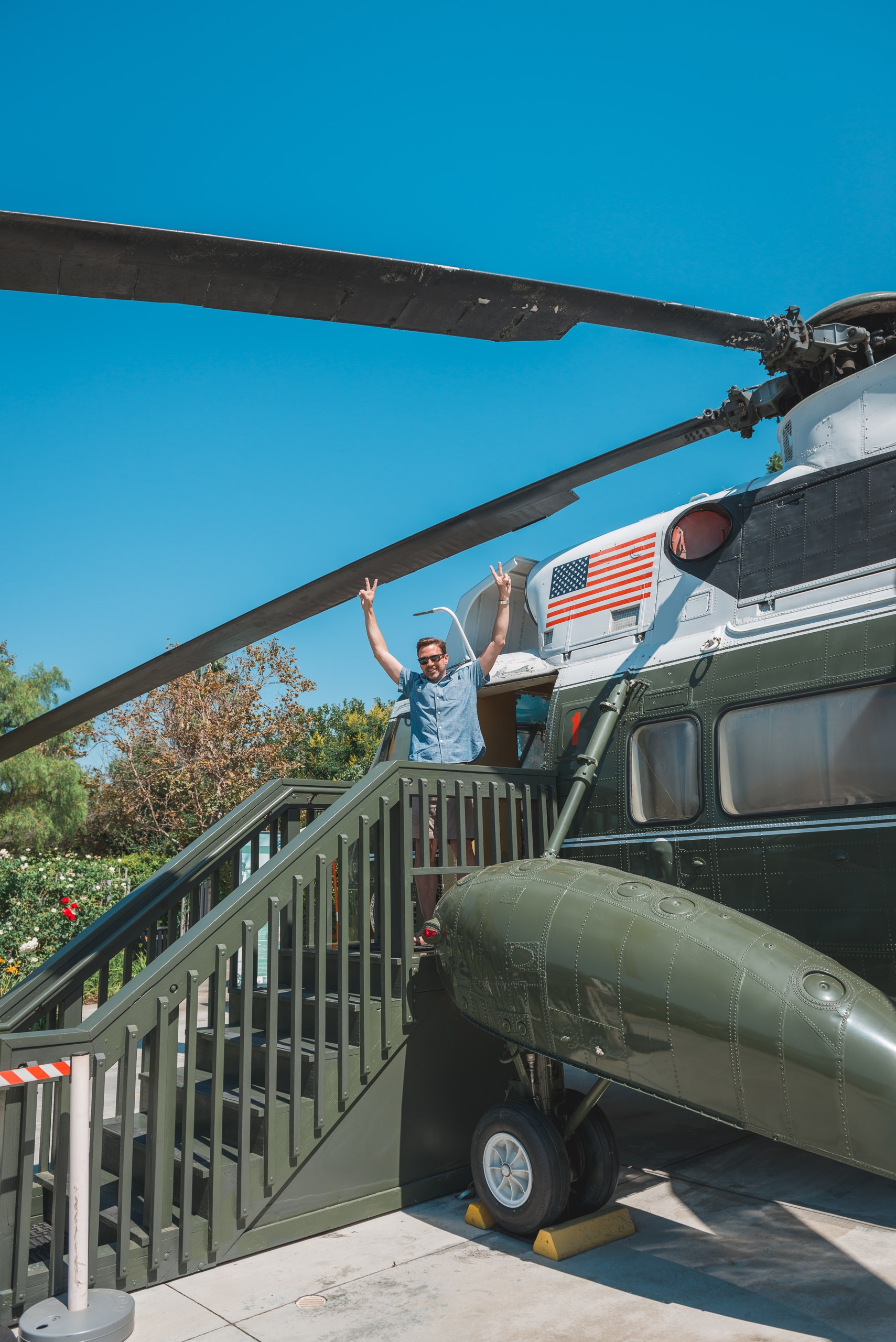 Walking back toward the museum, you pass the house where Richard Nixon was born, and the gravestones for Pat and Richard Nixon seated within a large rose garden. Pat Nixon was an avid gardener, and roses were among her favorite. 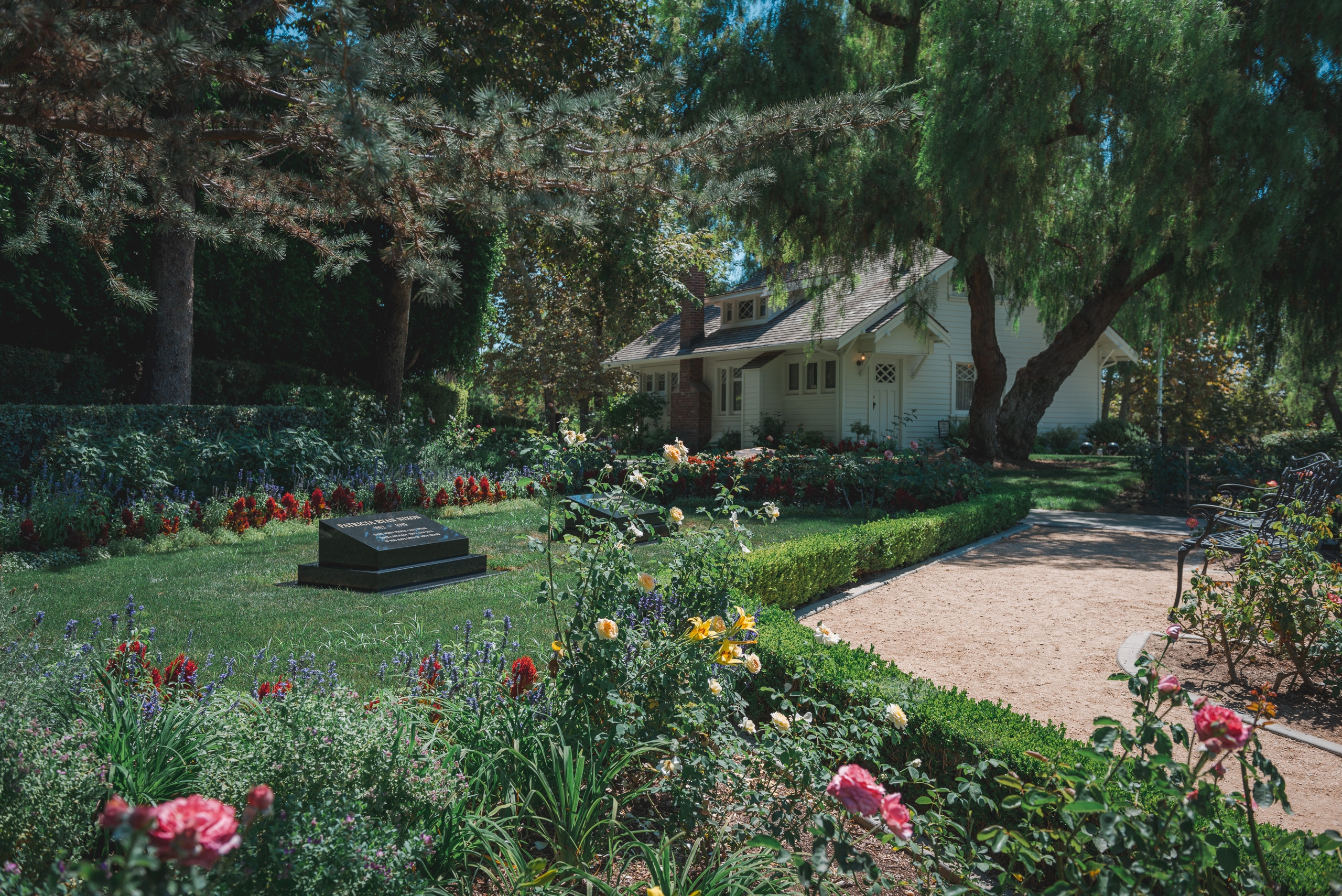 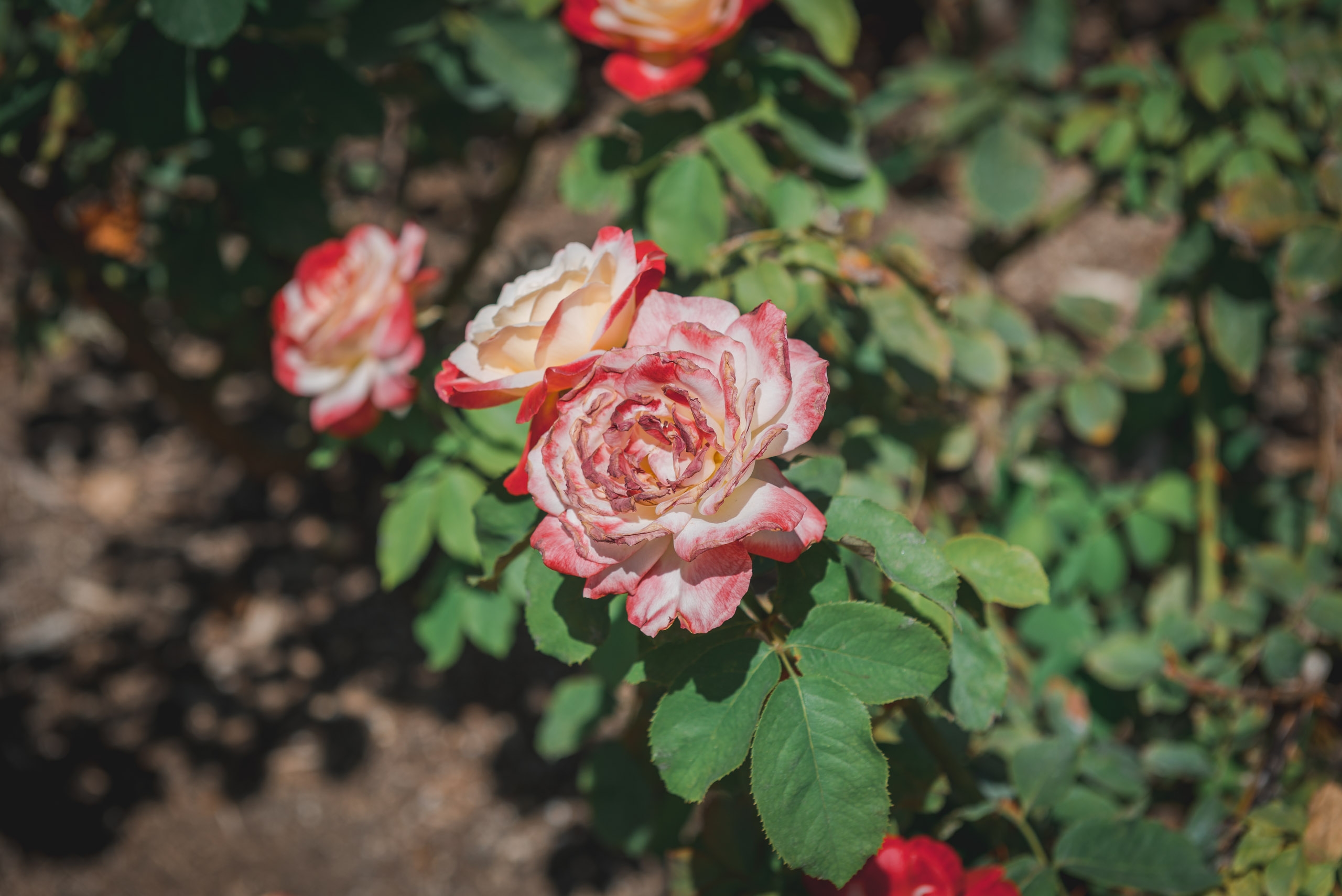 The interior if the museum is interesting, but we were pressed for time and didn't get to spend as long as we would have liked. The exhibits are organized around the chronology of Nixon's political career, and feature items of historical significance, namely the Apollo 11 moon landing, normalization of relations with China, Vietnam and the Cold War. 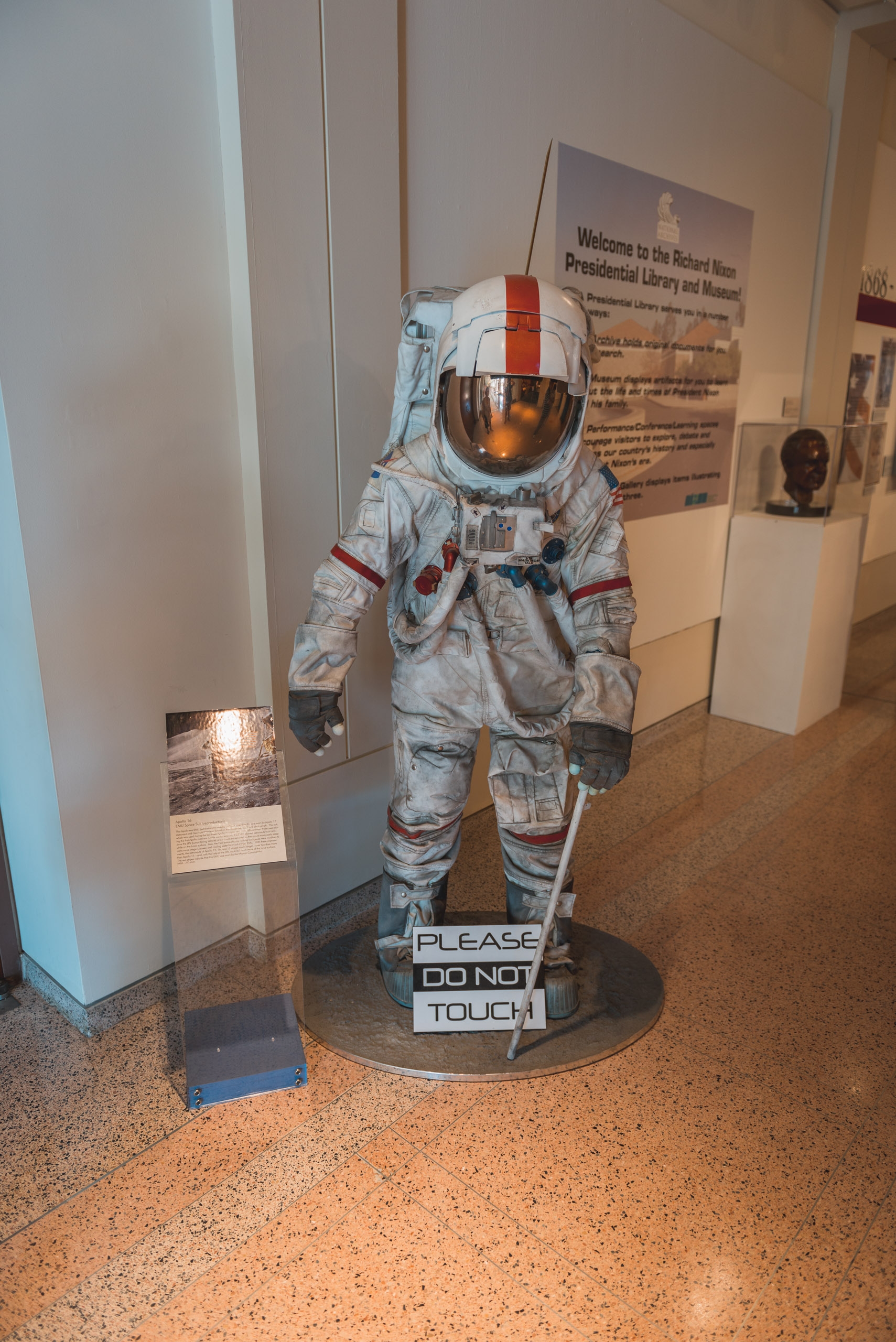 This astronaut suit is a recreation, but the moon rock was real (and very cool) 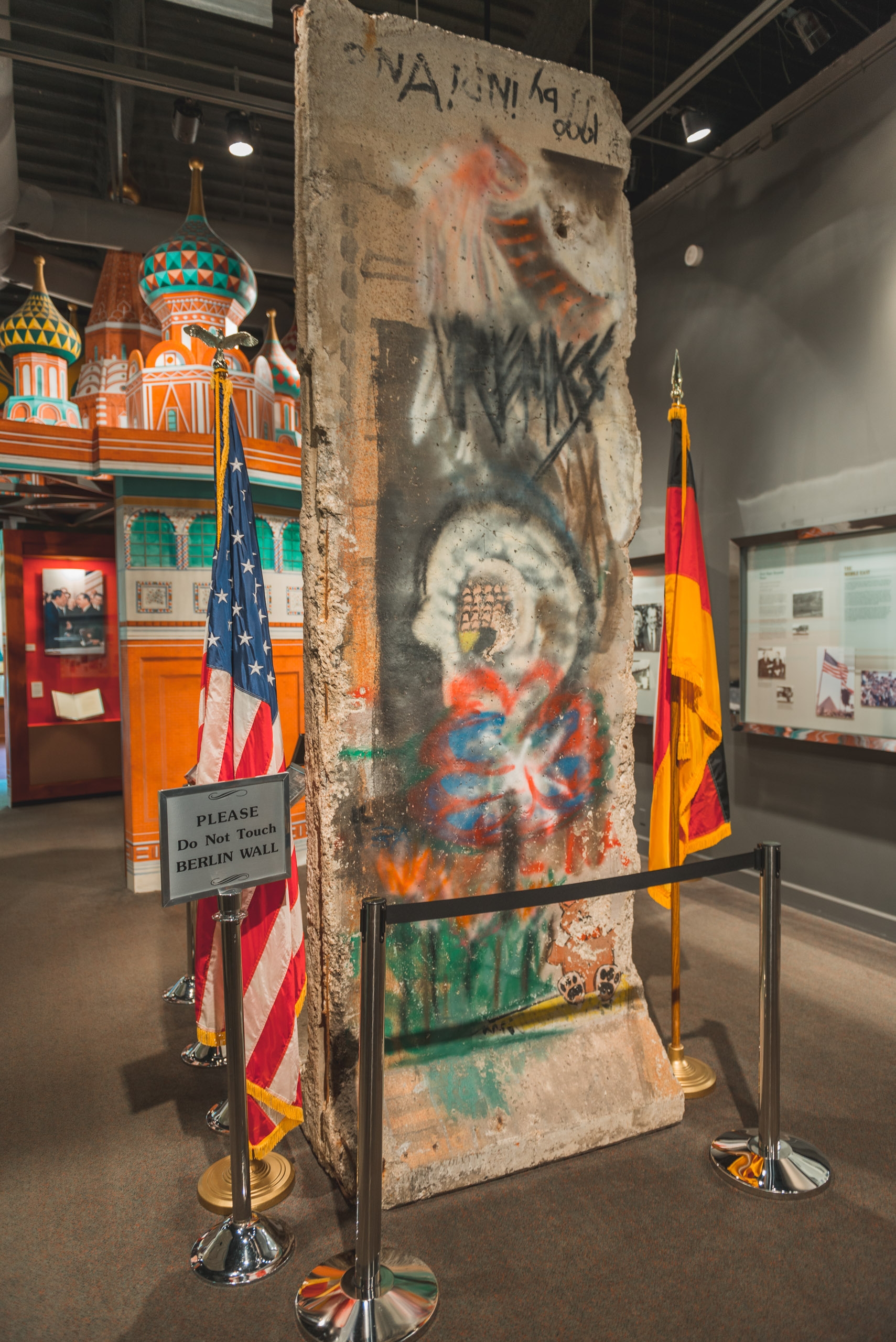 A graffitied remnant of the Berlin Wall

The last and largest exhibit in the museum was dedicated to the Watergate scandal. The details of Watergate are big and complex, and I won't attempt to summarize that here. The exhibit did a fair job of presenting the facts and didn't make any excuses for Nixon's actions or culpabilities. In fact, the exhibit paints him in a (justifiably) harsh light. The exhibit concludes by basically saying that despite the depths of crisis during that time, The System works so yay America. 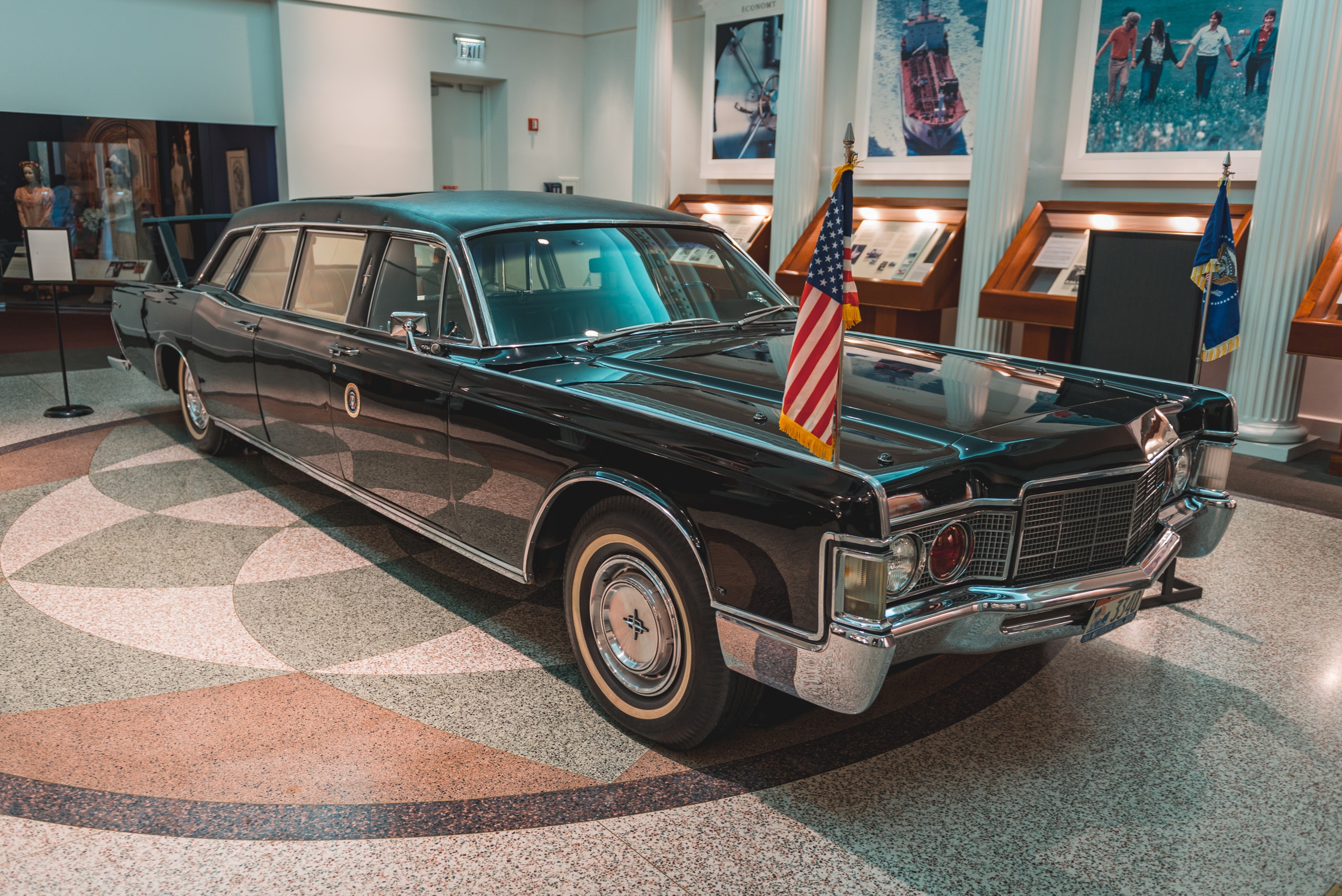 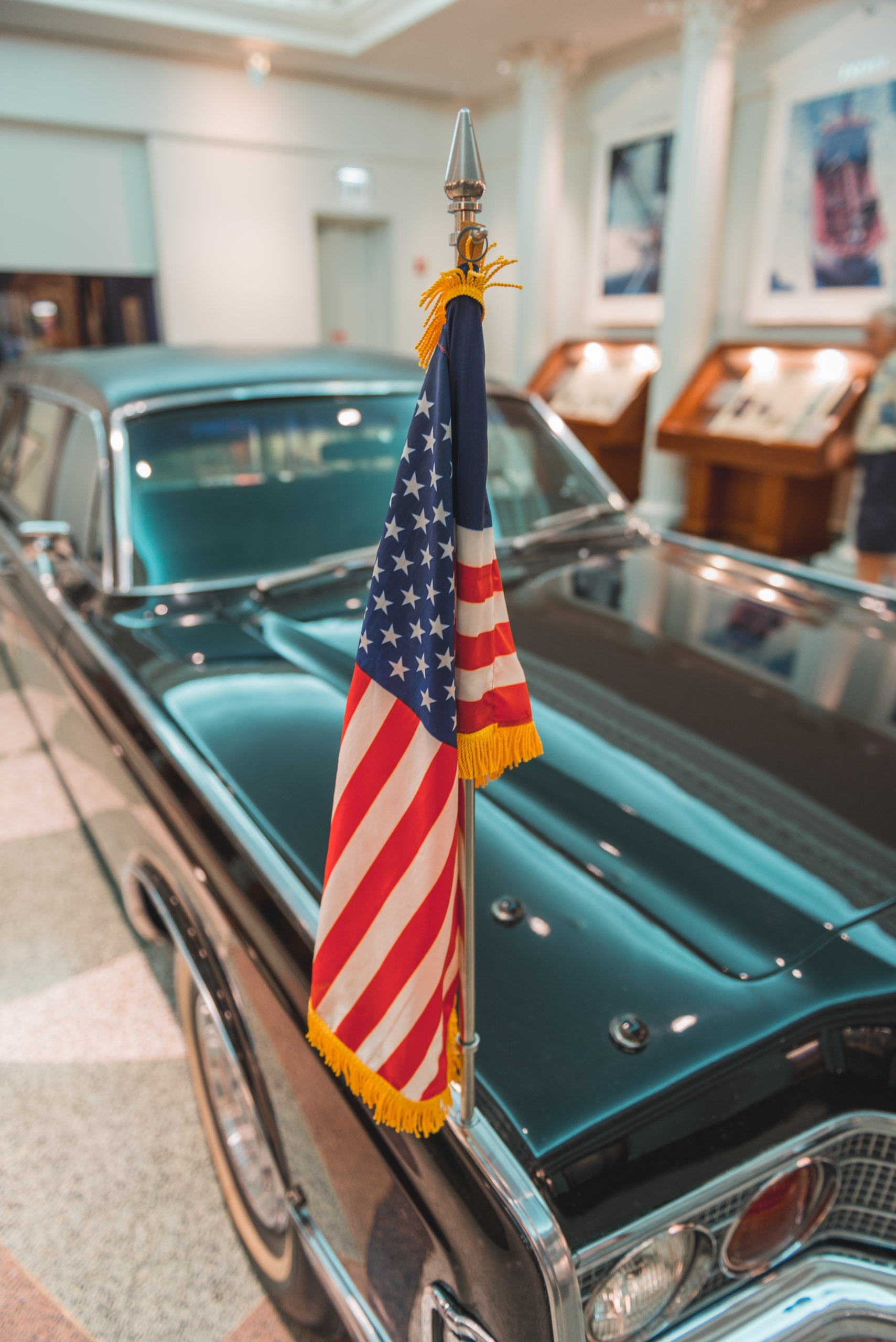 I've been to a few Presidential libraries and have always found them worthwhile. We were also interested in visiting the Reagan Library, but that sits way on the other side of Los Angeles so it might as well have been in another state, and we were more interested in going on the Warner Brothers studio tour so that too will be added to the "Some Day, Next Time" Infinite List.
tags: los angeles, museums, national parks, us travel