dark mode
Thanksgiving in Hawaii: A Visit to Oahu & Kauai
December 15, 2015
We spent the Thanksgiving holiday visiting friends in Hawaii. John, Carey & Fiona live in Kailua on Oahu, about a half-hour from downtown Honolulu. Jessica's mom Deborah spent the past month in Taiwan, and met up with us for three days on Oahu and four days on the neighbor island of Kauai. This was Jessica's first visit to Kauai, and my third; though the last time I was in Kauai was in 1999. For the record, this is my 12th trip to Hawaii (third since moving to New York 5 years ago). Kris and Jessica on Lanikai Beach 2

We took the United non-stop form Newark to Honolulu on Saturday, a relatively easy 11-hour flight that arrived in Hawaii Saturday afternoon around 3PM. It's a strange experience to be on a plane for that long and still be in the United States. Jessica's mom arrived the following Sunday morning on an Asiana flight via Seoul, Korea.

After a quick breakfast, we met up with John, Carey & Fiona and headed out to hike the Makapuu Lighthouse Trail. It was an easy hike with great views along the coast. On our way back, we saw a large pod of whales migrating south for the winter. It rained a bit at the beginning of the hike, but not enough to turn us back.

To be frank, the weather on this trip wasn't the best. On previous trips to Hawaii, the weather has been pretty consistently perfect, so naturally less-than-perfect is a disappointment. That said, it is still Hawaii, which is amazing nonetheless. On our way up the Makapuu Lighthouse Trail. Diamond Head is beyond those hills Taking a Break Halfway Up

That night John & Carey cooked at home, and Carey's parents Richard and Angelica joined us for dinner and several games of dominoes (the rules are still being contested to this day). The next morning we had a big breakfast and headed over to hike the Diamond Head trail. The five hour time difference from New York makes getting out of bed easy and early. Deborah Takes a Break Halfway Up The View from the Top of Diamond Head

The last time I was atop Diamond Head was with Jessica in January 2007 on our first trip to Hawaii. The weather was much better that day, but the view from the top does not disappoint. That night we went to the Paradise Cove Luau, one of the better luaus among toursity luaus. It was a first for Deborah, Richard and Angelica. The weather was perfect, and the food was surprisingly good. We watched the hukilau, got fake tattoos and bought a tiki for the apartment. Richard Angelica Carey Fiona and John at the Luau

Wednesday morning we grabbed (another) big breakfast and headed to Kauai for the next four days. The flight was about 20 minutes, but surprisingly expensive. We rented a condo in Poipu on the southern coast, which tends to have better weather and more options for restaurants, shopping and some of the nicer beaches on Kauai. We were about 5 minutes' walk to Poipu Beach Park, and 5 minutes the other way to the Grand Hyatt, one of the larger resorts on Kauai. Jessica Taking a Break While Hiking on Kauai 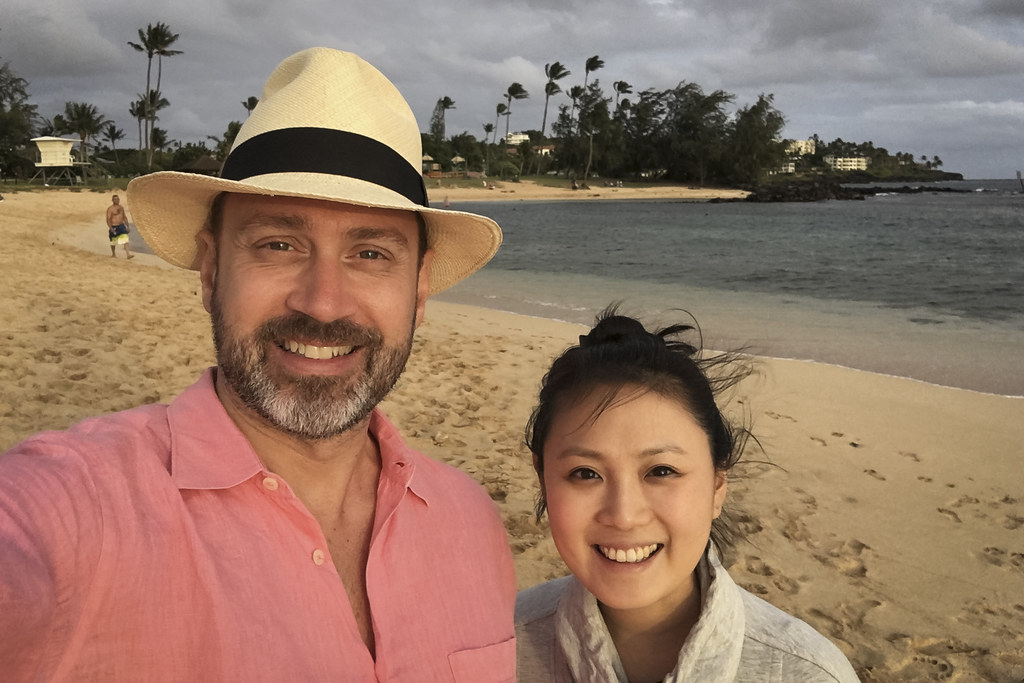 The next morning, Jessica, Deborah and I were up early to catch a snorkeling boat up the Napali Coast. The Napali Coast is famous for its rugged beauty, and even more rugged seas. Of the twenty or so passengers, a handful spent most of their ride up losing their breakfast. Once the boat turns and heads south, the ride is remarkably smooth and once again enjoyable. The uncooperative weather kept us from seeing much, but it was a great day on the water. Jessica near the Napali Coast Deborah and Jessica Near the Napali Coast That night we did Thanksgiving dinner at Merriman's Fish House in Poipu. The next morning we drove about an hour north to see Waimea Canyon, the so-called, "Grand Canyon of the Pacific." Most of the more scenic vistas are easily drivable, so it was a leisurely day of driving and sightseeing. The further north we went, the worse the weather became. We ended up having our picnic lunch in the car waiting for the rain to clear (it never did), and sadly we were unable to see the Napali coastline from above. Maybe next time. After Waimea Canyon sightseeing, we drove back to Poipu along the coast and stopped in the scenic town of Hanapepe. Home to the original Lappert's ice cream and the famous Swinging Bridge (it really swings), Hanapepe was the real-life inspiration for the Lilo's hometown in Lilo & Stitch. On our last day in Kauai, we walked down to the coast and marveled at the rare sunshine. We passed the Grand Hyatt and hiked along the seaside cliffs above the coast. It was still windy, but the views and the sun were a welcome change. We flew back to Oahu on Sunday before the long flight back to New York. We stopped at the Pali Lookout to admire the view of the back of Oahu. We drove down to Lanikai Beach and splashed around a bit the only other sunny beach day we had, just before the sun started to set. After dinner and Mai Tais at Buzz's, we packed up and headed off to HNL for the 9-hour redeye back to Newark. 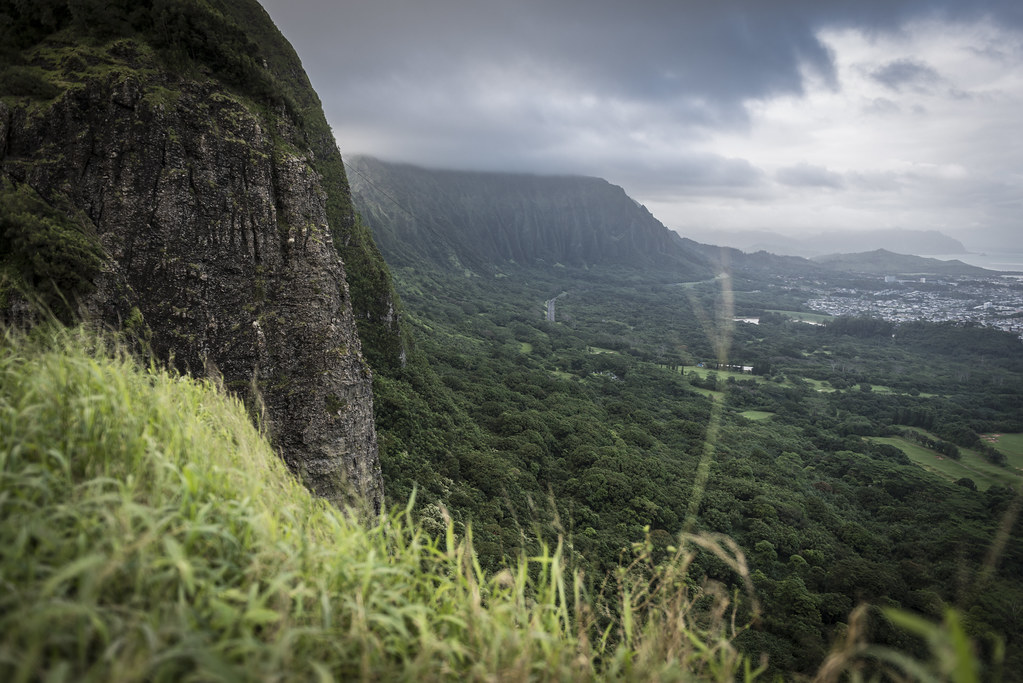 The view form the Pali Lookout on Oahu. (click to see a view of the Pali from 2007) John and Jessica on Lanikai Beach

I took a bunch of video, and compiled it into a brief montage embedded below. I noticed I had lots of video of people waving, so that became a thing. Note: this is an extended version of a video you may have seen earlier.

Whenever you see an iPhone camera in Hawaii, be sure to wave.

It goes without saying that one of the things we love about Hawaii is the food. Some of the best and most authentic Japanese food in the US is in Hawaii, and Hawaiian food itself, though not necessarily haute cuisine, is certainly tasty. Be sure to see our dining list at the bottom of this post. 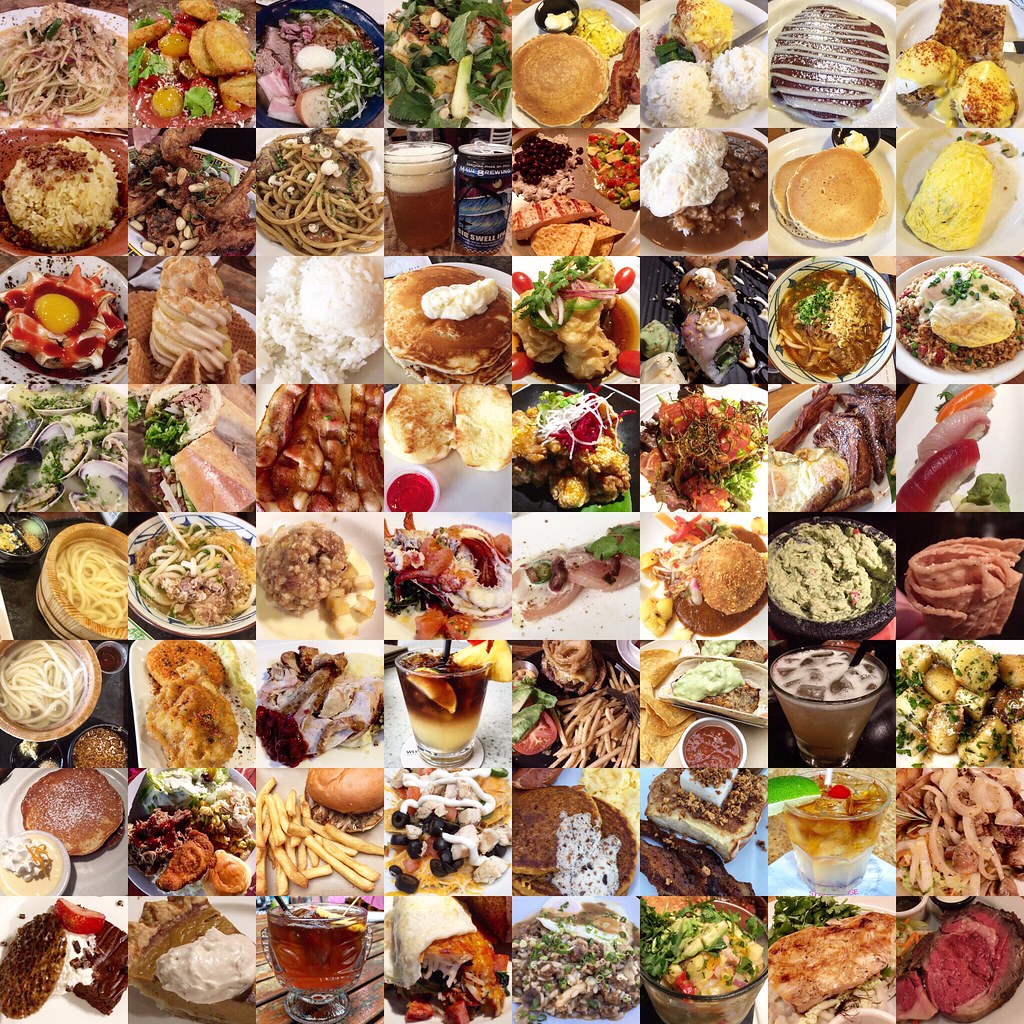 64 of our favorite items from across Hawaii

We haven't done much traveling this year, so we were very much looking forward to this trip. It was fun to show Deborah around Oahu and Kauai. It was also great seeing John and Carey, and meeting Fiona for the first time. Despite the imperfect weather, we had a fantastic time and are already dreaming of our next beach getaway. 
HOW WE GOT HERE